This sentiment is precisely the charming sort of appraisal that Klosterman levels at every Hair Metal Band you could name. Mötley Crüe, Bon Jovi, Poison, Cinderella and a host of (to me) obscure bands are given Klosteman's jolly consideration. His defense of a musical genre I've always considered lame is so cheerful and winning, I just about purchased Crüe's loving tribute to itself, Red, White & Crüe.

Just about, but not quite. I asked the guy at the counter to spin a few tracks for me, just to see if Klosterman had actually changed the chemical properties of my own personal acid test. I grinned. I couldn't stop grinning. Music guy looked at me, bobbed his head and asked, "So you like this stuff?"

As a gesture of homage to Klosterman -- a tip of my felt top hat, if you will -- I did finally purchase Appetite For Destruction. I don't like it, either. Slash cut his own distinctive guitar sound, and there's no denying it rocks, but for the life of me I still can't figure out why these jokers were so much bigger than Jane's Addiction. Musically and thematically, Nothing's Shocking has it all over Appetite -- in fact NS has it all over 95% of Nirvana's ouevre, too. And yet if Axl Rose got the therapy (or the smack to the side of the head) he needed to reunite with his former bandmates, my generation would jump in line. JA reforms, and they're forced to quit the tour after a handful of shows because the fans are home, polishing their piercings.

I wouldn't pay money to see either band -- I dislike the nostalgia circuit, and that's what they both amount to right now. But I've veered away from my topic (an indulgence I took, stylistically inspired by Klosterman). I was talking about Hair Metal, and how I never liked the stuff -- ever. I remained smugly secure about my near-inerrant taste in music until just the other week, when I flipped through my record collection in search of old T Bone Burnett. Mid-way through my album-flipping I suddenly stopped at a garish reminder that my rock habit has indeed included music I could no longer defend or listen to: Pyromania, by Def Leppard. Does Def Lep qualify as "Hair Metal"? Some might argue no, DL rightfully belongs to the British New Wave of Metal that inspired acts like Metallica and Megadeth. I don't care. Pyromania sounds to me like all the other polished-to-perfection acts that crowded the scene at the time. And I loved it -- at the time. I can remember moving furniture to the walls and jumping around with my friends in my parents' living room, where the good stereo was located. Rock and Roll!!!

No longer. As of April 4, 2006, if I hear the opening words, "Unter glieben glauben globen!" coming from your car stereo, it had better be The Misfits that you're playing. And even then, I expect you to acknowledge their own "best by" date has come and gone -- along with Def Leppard's. 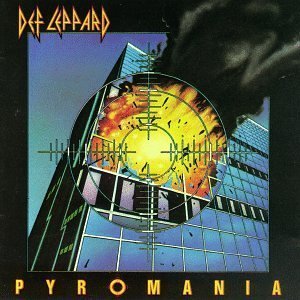 Nowadays, ol' Def probably suffers more from pyria rather than a need to set something aflame...

A bit 9/11-ish that "Pyromania" cover, no? Wonder if the Homeland Security folks are on the heavy metal trail.

DV - funny, but those were my exact same thoughts when I stumbled across my old LP.

Twisted Sister, Stay Hungry, especially "We're Not Gonna Take It," is just as sublimely bad as "Poor Some Sugar On Me."

I could never get past that 'Mutt' Lange production -- whether it was Def Leppard, the Cars, Bryan Adams, there's always these arena-wannabe "WHOA-OH"s that crack me up!

I loved that you actually gave it a spin in the record store, along with your comment to the clerk.

As for Twisted Sister, I thought they were utterly ridiculous and couldn't help but love them for it. Just thinking of how determined they looked singing "I Wanna Rock" gives me the giggles.

Twisted Sister came on the scene just as Def Lep were wearing out their welcome; Dee Snider never had a chance.

Re: Mutt Lange's magic touch - I'm starting to think he should be the one wearing the horns, and not Angus Young. AC/DC clearly did alright by him, but they at least had the presence of mind to burn all possible bridges with Lange during the BIB sessions. They claim he pushed hard to get them to do a ballad for the album. They complied by singing a song about his (then) wife, which had the desired effect. Too bad his current wife doesn't possess the necessary sass to keep him humble.

Oh, c'mon... you all love these "big hair" bands at some point, and it wasn't because you used your reasoning to find out what makes these bands great, other than simply because they rock!

True enough. And I still include the odd "Hair Metal" selection when I send my godson a mixed CD. Having looked over this little list I must admit there's really only one song I'm truly ashamed of: "Oh, Buddha." That song somehow makes all those horndog lyrics I listened to sound politically correct.