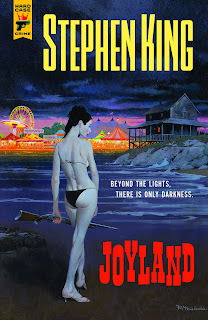 A friend pressed a copy of Joyland into my hands, and wondered if it mightn't change my general opinion of Stephen King's work. In fact I found it fell very quickly into my usual experience of King. I enjoyed it, until I didn't. And then I stopped reading. No need to flesh that out, really.*

Still, King is kind of a fun guy to have on the scene, no? It amuses me to see the LARB furiously back-pedal after their early “usurp the King” broadside. FWIW, Colin Dickey's sympathies are very close to my own. He praises King the Reader, and I'm with him on that. For all King's bitching about New Yorker fiction, he's the guy who introduced me to Roberto Bolaño in the pages of Entertainment Weekly. I like him for that unexpected sort of provocation. Also, I unreservedly recommend his On Writing to anyone who reads English, not just for its good advice (“The adverb is not your friend”), but for King's self-disclosure: including before-and-after drafts of a short story is a gutsy, and reader-empowering, stunt that most writers are much too insecure to do.** 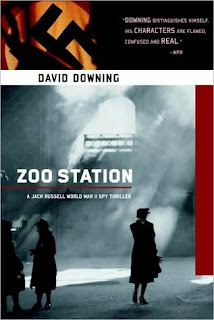 Anyway, somewhere around the halfway mark, I dropped Joyland and picked up Zoo Station by David Downing, a book I've had for quite some time. It seems Jeff Bezos noticed my affection for Philip Kerr's Bernie Gunther novels, and he insisted I really ought to give Downing a look. I hesitated. If Downing wasn't as good as Kerr at this whole Berlin Noir scene, it would be tough slogging and a begrudged ten dollar purchase. If Downing was better, well, that could be problematic, too.

“Noir” isn't Downing's game, however, though he is acutely aware of the many tragic shades of gray that ran through post-Weimar Germany. His publisher pitches the book as “Crime” and “Spy Thriller,” two classifications which fit, if somewhat on the Extra-Large side of things. Downing's protagonist, John Russell, is a British free-lance journalist treading the tides of midlife during the rise of the Nazis. He wants to stay close to the son he fathered in Germany, even as he notes with horror and depression the nation's lock-step toward war — and worse. Russell's trade is not exactly in demand — at least not from reputable sources — so he is living from hand-to-mouth. Then someone from a not-so-reputable source (in Russia) offers him a job that seems too good to be true. A survivor of the trenches as well as an earlier dalliance with Communism, Russell is slow to accept, but eventually he does. Without giving away any more, the set-up is a subtle and convincing gateway into the geopolitical machinations of the day. I loved it, and am cuing up the remaining books in the series.

On the non-literary side of things, I recently picked up season one of Friday Night Lights. I had my doubts about its worth, and the first episode was touch-and-go. So much of what I was seeing looked like something from another planet. Does small-town Texas really pray before and after each individual high school football game? Even in the Mennonite village of my childhood, that would have been pushing the religious thing a nudge too far.

But that candid approach to the material, and to the characters, won me over with surprising speed. Emboldened, I foisted the series on my family — even though the younger daughter (14) hates, hates, hates sports and will not abide any movie with a sporting event as its center-point. And I am here to tell you: Mikey likes it! In fact, nobody in this family can get enough of this football-centered soap opera.

That's just season one, mind you — there are four more to go (and I'm told S2 was a nearly-unrecoverable stinker). The only series I've seen justify a fourth season is The Wire. Five worthy seasons is doable; attempting it, however, remains unrecommended. 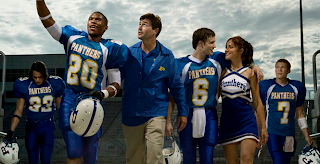 *Although I'll throw out one bitchy aside: it's jarring, to say the least, while reading a novel set in 1974 to encounter one character who says, “Is it live, or is it Memorex?” and another who offers to microwave a bowl of soup — within the first 35 pages. Granted, King's copy-editor probably wasn't even a gleam in her daddy's eye in 1974. But in a family of writers who apparently read each other's work, and don't dint on the criticism, these lapses are … surprising.

**Joel remarked on the effect King's fiction has on the adolescent reader, which Lydia Kiesling rather touchingly describes, at length, here.
Posted by dpreimer at 12:59 pm 3 comments:
Email ThisBlogThis!Share to TwitterShare to FacebookShare to Pinterest

Ah, vacation. My impulse to throw books into the beach bag is as strong as this guy's, but I'm old enough and experienced enough to curb it before I get to 24. And while I'll agree that the mass-market paperback is still the ideal medium for the journey, I'm finding that after my second glass of wine the eyes take longer to focus on the print. Better, then, to add a few comic books to the mix.

It's been a DC summer for me — I guess most summers are (that shouldn't surprise me, but it does).

I started with Ed Brubaker and Cameron Stewart's Catwoman: No Easy Way Down. As a storyteller, Brubaker is a patient craftsman who revels in the slow-reveal of subtle emotional surprises. He is well-served by Stewart's art, which riffs off Darwyn Cooke's aesthetic of bold lines and pastel colours. 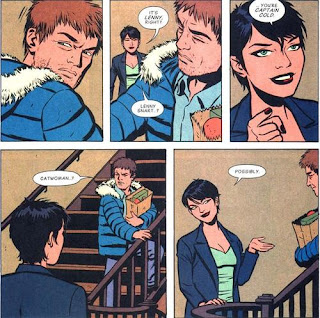 Midway through the book, however, the storyboard is given over to Javier Pulido, who really strips it down, even pulling in some formalist experimentation that reminded me of David Mazzucchelli or Art Spiegelman. In these two pages he illustrates a character's inner struggle with her addictions: 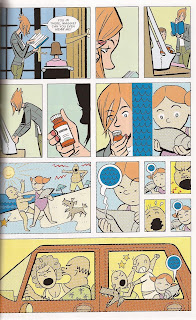 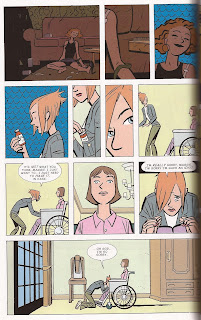 Pulido's technique doesn't just elevate Brubaker's building-block approach to narrative, it also turns up the heat on the title character's sexual tension — and confusion — with the characters around her (including, of course, the Batman). It is a fabulous few pages, but sadly short-lived. The storyboard is handed back to Stewart, and the experiments come to an abrupt halt. It's a shame, but it's still well-above-average for the industry. To quote Abe Lincoln, if you dig this stuff, you'll really dig this stuff.

And Brubaker gets a lot of love from the comic book store set — even the reliable grump Frank Miller sings his praises.* Hey, Brubaker deserves it — the dude's not just prolific (and how!), he's engaging. But the possibility that he might just be the industry's brightest light, however, is an unsettling thought.

Chalk it down to writer's envy. If you even dabble in story-telling, your brain knows it's all smoke-and-mirrors, or sleight-of-hand. When you read someone else's work, and that someone is trumpeted as God's Gift To The Genre, you want to be hit with a Houdini (or, if you prefer meta, Penn & Teller). When you get to the end of the story, you want to say, “Wait: what just happened there? How'd he do that?” Well, with Brubaker you pretty much know. He's got fluid hands, but the ace of spades always turns up behind your ear, or under your tongue. It won't be found inside that iced trout you just brought home from the market.

Miller's tip-of-the-hat is generous, deserved, and spot-on. Brubaker's writing is every bit as accomplished as Miller's was in Year One, and when coupled with a talent like Pulido's, it dazzles (akin, say, to the riskier Miller/Mazzucchelli Daredevil: Born Again). But it's still safe. Snotty old sod that I am, I keep hoping for something to knock me over.**,***

Speaking of “safe,” DC has gone and followed up last year's punky Batman:The Court Of Owls with The Night Of Owls (A) and City Of Owls (A): two very safe — and entirely disappointing — volumes in the DC canon. Scott Snyder is still in charge of the story, and he's proficient enough to hold reader interest until the Big Reveal at conclusion.**** But the deeper delight of Court was Greg Capullo's playful art. Capullo is still on board for much of the two books, but he seems reined in. Worse, because both these books rely heavily on character-title cross-over, other artists show up with the standard DC template, producing fare which ranges from the merely acceptable to the completely risible.

But this business of forcing your heroines to mince about the rooftops, 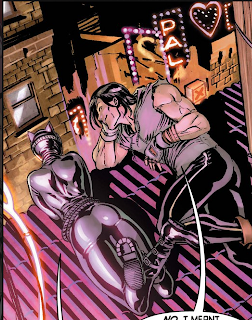 or daintily break ribs and teeth, 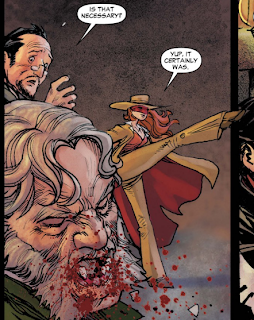 while holding Calendar Girl poses leeches emotional oomph from your sequential art. Seriously: DC's writers do a better-than-average job of presenting kick-ass women characters, and you fan-boy artists have to dress it up like a Victoria's Secret pillow-fight? 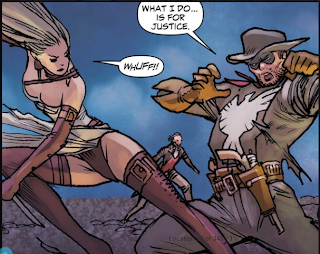 You haven't the faintest clue just how sad that makes you look. And lest you miss my point, let me spell it out for you: this isn't a “I guess we'll just cave in to the femi-nazis” issue — it's a “How porni-fried and stoopid do your brains have to be for you to commit that shit to paper?” issue. Take your hands off your weenies and get a grip on your art.

Anyway, the Owls storyline is finished, and it's forgettable. Feel free to read it and leave it on the beach.

Next: some pulp, including Stephen King.

*“Brubaker's got the chops. This is one damn fine comic book.”

**“Bowl me over” — the way Elektra: Assassin did, back in the day (FWIW, Brubaker's Vertigo title Fatale is playing out quite promisingly. But as with television, I'm not giving it my endorsement until that show is over).

***I feel the same way about Neal Gaiman's stuff. Whenever I finish something by him I tend to think, “Nicely done. But, uh, isn't there a faster way to get the same results?” There probably isn't, which is why a little additional flash delivers such incomparable value. In Gaiman's case, the spectacular movie Coraline outshines the book. In Brubaker's case, Pulido's art is just the thing to fan the spark of this viewer's interest.


****Which I thought was rather ho-hum, finally. I haven't followed Batman's New 52 story arc all that closely, but from what I gather in the 'Owls' books alone, he's already been subjected to some tectonic relationship-jolters. The one at the end of 'Owls' oughtn't to generate more than a shrug and a “So?”
Posted by Whisky Prajer at 11:06 am 1 comment:
Email ThisBlogThis!Share to TwitterShare to FacebookShare to Pinterest

The Self-Promoting Genius of Elmore Leonard

I've read exactly six Elmore Leonard novels. This puts me in the peculiar spot of having read a fair representation of the man's work, without quite picking him up as a habit. I'm settling on the reasons for that, but I'll get to those after I've digested Raylan.

I devoured his profiles and interviews, though. The man was a canny self-promoter nonpareil.

Here is a classic example: a Brit interviews “Dutch” and swallows the “What a humble man” shtick hook, line and sinker. Now, granted, at this point it's bad form to suggest Leonard was anything but. Certainly he was a master at charming self-effacement. But look at the little digs he takes at Quentin Tarantino and Martin Amis. They're delivered in a “Just joshing amongst friends” tone, and both subjects seemingly laugh it off. But these “off-handed” jabs also hit the bulls-eye — pretty hard — making Dutch the winner-by-a-knockout in this profile, without either of his targets realizing what hit 'em.

I'm going to miss that.
Posted by dpreimer at 10:27 am No comments:
Email ThisBlogThis!Share to TwitterShare to FacebookShare to Pinterest
Newer Posts Older Posts Home
Subscribe to: Posts (Atom)