Liturgy: Taking the “Fun” out of “Funeral”

In the opening minutes of Hereditary is a short shot that unnerved me so badly I gave serious consideration to excusing myself and leaving.

The movie begins with a funeral. A child stands by the casket, beholding her late grandmother. In the periphery is a man looking directly at the child and grinning horribly. I thought, if the rest of the movie is like this I don't know if I can manage it.

The remainder of Hereditary is indeed upsetting, but I found the means for managing it. I might get into that at some point, but for the purposes of this posting I'll just use the grinning man as a metaphor for the state of remembrance in this place and age — lots of grinning, little grieving. 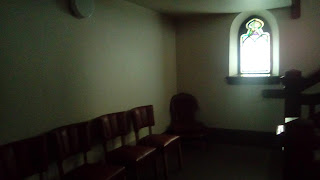 “Celebration of Life” seems to be a popular theme these days. To be fair, it is a rare funeral that doesn't contain some element of celebration — circumstances have to be crushingly tragic for all joy to be absent. But to reduce remembrance to mere “celebration” is a heinous sham.

I've been to a “celebration” that began with Led Zeppelin's “Kashmir” being played through a second-rate PA system. Things proceeded apace from there. You can believe it's a memory that haunts me. The fellow being celebrated was maybe 10 years my senior. He died by his own hand.

As we drove away from the service, I said to my younger daughter, “It doesn't matter which of our species' Big Five you settle on, so long as you publicly choose one and stick with it you will be saving the loved ones you leave behind the unintentional grief of proceedings like this.”

I have just returned from another funeral. 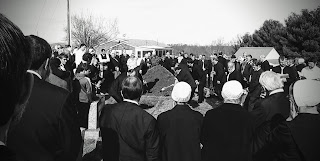 Anthony Block — a young man, 21, the son of my dearest childhood friend. Anthony was born to two Mennonite parents, and chose to be baptized into the Anglican Church his father joined some years ago. The funeral was a very big deal, because the death of a young person is a very big deal. I attended with my father. When we left he said, “The lovely thing about the Anglican liturgy is it allows all people to grieve.”

Given where I've been living and with whom I have associated for the past three decades — the bulk of my life — I have been in near constant contact with the Anglican Church of Canada. My difficulties, or “issues,” with it are significant. But dad is right. The liturgy helps. My wife and I borrowed the marriage liturgy when we tied the knot. I haven't given the orders, but you have my blessing to go ahead and pinch the Anglican funeral liturgy for my remembrance, should it come to that.

Getting back to the aforementioned “celebration” — the departed was born in the British Isles, a culture so thoroughly christened it is impossible to give a proper account of it. It would not have been completely out-of-bounds, I don't think, to resort to the liturgy on his behalf — in fact, at one point we all rose to say the Lord's Prayer, regardless of the man's religious convictions or lack thereof. Had we frog-marched ourselves through the liturgy, his closest friends could have said, “What a crock! R___ didn't believe a word of this guff — he must be spinning!” But that anger — that's good, isn't it? That's grief, man. That needs to be there.

Eyeh. I have enough friends who have very pointedly joined the “Nones” — I get it. In fact, I don't just empathize, I sympathize. But if that's you, please give some thought to your own funeral. Give your loved ones a chance to grieve. 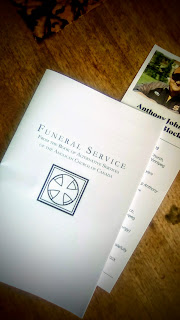 Anthony Block was among the gentlest people I've known. He was amazing with kids, and with vulnerable types in general — a soft touch, but not at all a pushover. He was unique, he loved to give. LiveDifferent is the charity designated to his memory.
Posted by Whisky Prajer at 10:31 am No comments:
Email ThisBlogThis!Share to TwitterShare to FacebookShare to Pinterest

I got a call from Our Mutual Friend, wondering if I'd join him in Hamilton to see Dan Baird & Homemade Sin at This Ain't Hollywood. My knee-jerk reaction was to decline, of course. But it had been just over a year since I'd last seen Our Friend and catching up with him over burgers and beer before a night of Baird & Co's feisty brand of rock 'n' roll was, on further reflection, quite an attractive offer. So I came out of “retirement” and made the drive to Steel-Town.

Back in '86, Baird shot out of the gate and into the stratosphere when his band, the Georgia Satellites, scored an unlikely hit with “Keep Your Hands To Yourself.” Thirty years later Baird is understandably circumspect about that event in his particular space-time continuum. He plays it every show, of course, and brought it out early this night. “If I'd known I was going to have to play this song the rest of my life, I would have wrote something else” — Joe Walsh said that about “Life's Been Good.” If Baird harbours similar feelings about “Hands” a) nobody could blame him, and b) nobody could sense it from the way he plays it on stage.

If this night was any indication, there is no more committed performer of the rock show than Dan Baird. He battled various gremlins throughout the night — a faulty capo, a broken snare, various tuning and timing issues. Such are the risks one courts when switching up the setlist every single night, often on-the-fly. Baird started up an impromptu version of “Long Black Veil” which clearly caught the bass-player — youthful newcomer Sean Savacool — off-guard. Savacool locked eyes with guitarist Warner Hodges, who calmly shepherded him through the chord progressions. The end result was a seamless success, a rock ‘n’ roll torquing of a country chestnut.

You and I last saw Hodges doing his thing as a Scorcher, some 20 years ago, when Perry was still alive and pounding the kit. Hodges was already clean and sober by then, but still exhibiting the attitude that once fuelled such exploits as smoking cigarettes through a nostril whilst lip-lock chugging a Heineken and keeping rhythm.

Today even the cigarette habit is in check, and his evolution as a bandmate is a revelation. He and Baird traded quips about the unexpected challenges encountered that evening — Baird’s delivered with a snicker and a sneer, while Hodges’ with a placid shrug and knowing smile.

Yin and Yang, in other words. Whoever thought balance could be achieved in a rock show? But if a rocker is going to do this into the sixth (and counting) decade of one’s life, however else are you going to manage it?

And all this before a crowd of 40.

During the final song of the night, an audience member rushed the stage in an evident euphoric state. I turned to check him out — he was a member of the opening band, a fellow some years older than I. He had announced his intention to get ripped to the tits, and had clearly managed the feat. For a moment I envied him — is it at all possible to trigger Dionysian rapture without resorting to Dionysian excess?
Rhetorical question.

The deeper envy was beholding this group of elder brothers, watching each other’s backs and committing themselves not just to the music and the show, but to each other’s welfare. They were a band, in other words — that most admirable and enviable of social/professional groups.

Let’s keep the band together, shall we?

P.S. This is the setlist, as near as Our Mutual Friend and I could figure. With the exception of the closing song, the rest of the order is VERY questionable. Also: missing are some numbers we couldn’t name, no doubt to be released on the forthcoming Screamer, which looks to be another winner.

Here is a recent interview with Baird, held just before a series of health shocks broadsided him/them. It burnishes some interesting insights into Baird’s way of thinking and doing his thing in the current environment.

-Good Problem To Have

Posted by Whisky Prajer at 10:18 am No comments:
Email ThisBlogThis!Share to TwitterShare to FacebookShare to Pinterest