2018 will not be a year I readily associate with “delight.”
News of Anthony's death was the equivalent of dropping an anchor through the floor of my little fishing boat. Other matters of concern followed, and I am agreeable to yacking about it person to person — drop me a line if you like. But we all know the deal: there are years when regaining balance requires focus on every single step. 2018 has been that sort of a year for a lot of people, I think.

I reconnected with a beloved friend this summer — watching Dan Baird & Co. roll up their sleeves and get the job done was a happy bonus. The setlist from that night helps me with same.

My two favourite books this year were Astral Weeks: A Secret History of 1968 by Ryan H. Walsh, and Julian Barnes' The Only Story.

Walsh's book received a lot of love from a wide variety of readers, and for very good reason. Walsh doesn't just evoke a particular scene — Boston in '68 is pretty peculiar, alright, but it's peculiar in ways that should seem familiar to anyone who watched the '60s gestate and take root in any city in North America. Next to Dream Time by Geoffrey O'Brien, Astral Weeks is the single best portrait of the '60s I have read.

Barnes' book didn't seem to get much coverage, but I loved it. I cannot improve on or in any way reinform Michael Czobit's lovely review of it, over here.

Musically, there were some new releases that caught me by the ears. Kate Dunton's TrioKAIT2 is pleasant; similarly, John Scofield's Combo 66. I have a lot of love for Automata I and II by Between The Buried & Me. Steven Wilson's Home Invasion rescued me — the live version of “The Raven That Refused To Sing” is especially moving, I think.

But most of 2018 was devoted to rediscovering old music. I was grateful for the 50th anniversary spit-and-polish of The Band's Music From Big Pink. But the stuff I queued up most frequently was by John Mayall and the Bluesbreakers, The Paul Butterfield Blues Band, The Three Kings of Blues, Savoy Brown, etc.

First of all, it's music that seems to suit this particular moment for me. Secondly, I'm trying to pick up as many stylistic flourishes as I can, to bring my own playing up a notch — which my wife and kids assure me has indeed improved noticeably (no word from the neighbours yet, but that's probably a good thing).

I owe it all to this guy, and the guy who introduced me to him. Justin Sandercoe and his online tutorials have been the single most uplifting element to my existence this year — my heartfelt thanks and appreciation go out to him.

And to you as well, for reading and even interacting with what I've got here. Merry Christmas, Happy Holidays, and God bless in 2019.
Posted by Whisky Prajer at 9:30 am No comments:
Email ThisBlogThis!Share to TwitterShare to FacebookShare to Pinterest

This time in South America — Paraguay, in fact.

Graeme Wood, on behalf of the Weekly Standard, seems bemused that Mennonites can wear ink, play electric guitar in church, race cars professionally and develop somewhat unsavoury reputations during their only-recently-acquired leisure time. In Paraguay, of all places!

Quaint Manitoba is also treated with an off-hand smirk — “There's a motto the Manitoba Tourism Council won't be promoting anytime soon: 'Mennonites come here to clean up their act.'” O-ho-ho — please, my sides.

Even a (relatively) robust periodical like the Weekly Standard has a limited budget for fact-finding journalism, I realize. Here, for free, is some of the low-down Wood missed. One reason a former Supknust Schürtzenjäager like Rees-Koa Penner can clean up his act in Manitoba is the Mennonites in Manitoba acquired affluence and influence — and all the vices that attend this condition — several decades before their brethren in Paraguay.
We've jumped into the political fray, swung local, provincial and national policy via the usual capitalist levers — and through these and other behaviours we have spread for ourselves a wide smear of notoriety as a result. So it would be fair to suggest Manitoba Mennonites have also acquired some experience in “cleaning up” and returning to first principles a decade or two ahead of the Chaco Mennonites as well.

Wood's reportage of Chaco shenanigans strikes me as fairly lite stuff when contrasted with, say, Mexican Mennonite collusion with the Juarez Cartel. But I am nevertheless grateful for his piece. He's got me meditating on my own history with Paraguayan Mennonites (more later, perhaps), and on the history I was not aware of until I read Alfred Neufeld's outstanding account of the Mennonite Experience in Paraguay — Part 1 over here and Part 2 over here. Read Neufeld. That is all.

h/t: thx, pdb!
Posted by Whisky Prajer at 9:19 am No comments:
Email ThisBlogThis!Share to TwitterShare to FacebookShare to Pinterest

I'm a sucker for NYRB books.
They're just so purty I could go on a tear and fill a bookcase with 'em, if only to please my eye.

I don't, of course — we (VERY POINTEDLY) do not have the shelf space. My parameters of purchase are: was I previously aware and desirous of this particular author/book? Do I enjoy the work of the person selected for the introduction? There are more than a few NYRB editions that I've bought solely for the intro. Sometimes that is as far as I read.

Until this morning, I was not at all aware of Józef Czapski — but with this excellent introduction and this celebration, I have now put Lost Time: Lectures on Proust in a Soviet Prison Camp and Inhuman Land: Searching For The Truth In Soviet Russia, 1941-1942 on my list of purchases for my next visit to BMV's flagship store in Toronto's Annex. 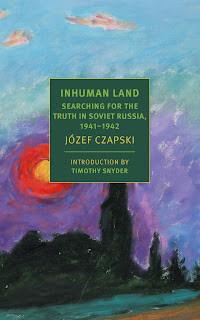 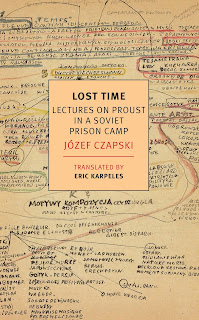 Posted by Whisky Prajer at 9:16 am 4 comments:
Email ThisBlogThis!Share to TwitterShare to FacebookShare to Pinterest

“Who is your ideal reader?”

Answer: “The dude who pays me the most money for what I write.”
Science fiction writers, hiring themselves out to corporations — sounds like a concept PKD might have run with, in a somewhat different direction.

“We hold these truths to be self-evident...”

When I was a Christian Rock-lovin’ youngster, the most important element to the art was The Truth.

Did these performers express The Truth clearly and unambiguously? If so, turn up the volume and press “play.”

Did they get fudgy about any of it? Well . . . a little of that sort of thing was admissible, if not exactly encouraged. Thankfully, Evangelicals had periodicals to sort through these matters. And woe betide the beleaguered artist compelled to explore nuances in matters deemed settled for once and for all. Step just a little beyond the line, and suddenly an entire back-catalogue of perfectly acceptable Christian Art would be purged and abandoned at the curb along with the offending cause/expression of Doubt.

Not a few contemporary Christian “careers” have been derailed by pious consumer impatience.

As adult experience slowly seeped into my adolescent fervour, it became painfully evident this 100% either-or intellectual stance had to go — the confusion and inner turmoil it kept at a roil generated too much hurtful behaviour toward others.

And still does, I am sure. Keeping it in check — or rather, keeping my easily wounded ego in check, which seems always to be a 100% either-or matter — is the difficult business of life. Well . . . one of life's difficult businesses, at least for me.

The first thing to go in my altered pursuit of happiness were the Christian periodicals. In these rags aesthetic concerns were always moral concerns — generating a milieu in which it was impossible to avoid checklist criticism.

The stuff that attracted my attention now was sensual. I had no acumen I could be confident in. FWIW the best I've come up with is: the sensual provokes the emotions. The emotions invoke the intellect. The intellect girds up, and returns to the sensual in hopes of a conditional surrender. The cycle continues.

The critics I love to read were unabashed sensualists. Roger Ebert, Pauline Kael, Lester Bangs, Eve Babitz, Martin Amis, Robert Hughes didn't just explicate — they threw in a lushness and luridness of experience to make the explication sensually comprehensible. They added just enough too much to make me want more. For them, the horizon of aesthetic possibility was perpetually and joyously beyond reach.

Babitz and Amis don't seem to be writing this sort of thing anymore. The others are dead. And today just a glance at the links curated by artsjournal or bookforum feels like a return to the dreaded back pages of Christianity Today. Does your favourite author/director/performer/impresario meet the conditions on the expanding checklist? Do they express and adhere to The Truth, clearly and unambiguously? If not, then to the curb.

Eyeh — instead of complaining, Prajer, why don't you just do?

Yes, yes — to be sure. I promise to try. I'm just saying it's an increasingly lonely business.


Links: believe it or not, it's Andrew Sullivan's latest that has me ruminating so. And the inverted Manet is by Mara McAfee, found here.
Posted by Whisky Prajer at 9:30 am No comments:
Email ThisBlogThis!Share to TwitterShare to FacebookShare to Pinterest

Those guidelines are worse than absurd. “No female-presenting nipples” is enough to gut content from a beloved site like The Bristol Board, whose curator posts terrific comic book art. And it doesn’t stop there — not by a long shot.
My post title is stolen from Warren Ellis, whose wisdom — and experience — on these matters penetrates. His opening gambit: “I’m a syndicator. I stopped wanting to silo original collections of words in other people’s systems a long time ago.”

Gulp. Where I come from, when a guy like me reads words like that, we say he feels convicted. Actions to be determined . . .

Anyway, shout-out to The Bristol Board fella, who has introduced me to a great deal of super-fabulous stuff — most recently ‘Cave Girls of the Lost World,’ by Richard Sala. 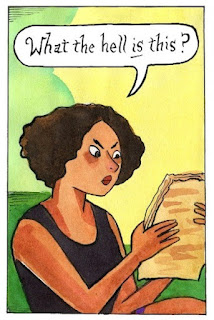 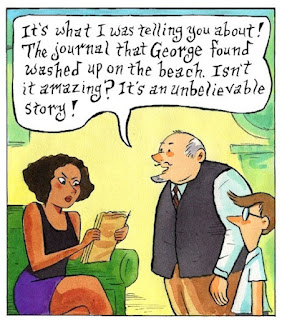 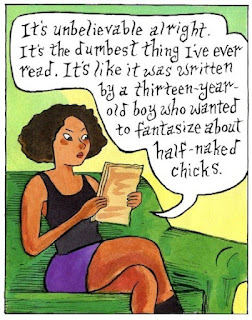 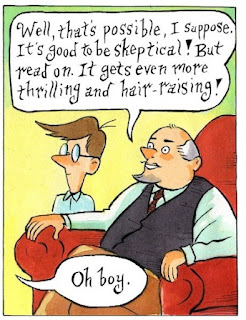 More here, including female-presenting nipples! — check it out while you can.

P.S. TBB-guy, if you’re reading this — if you have a code-writing buddy, you can rig a personal silo like Ellis’s quite inexpensively. And if you don’t have a code-writing buddy, please drop me a note — I’d be honoured to set you up.
Posted by Whisky Prajer at 8:36 am 5 comments:
Email ThisBlogThis!Share to TwitterShare to FacebookShare to Pinterest

It has been ten years since Punisher: War Zone was quietly released to near-universal critical drubbing, pulling in Marvel's poorest box office returns to date. Since then, amid growing residuals and critical reappraisal, the movie has earned genuine cult status and is arguably THE visual template for the entire line of Netflix/Marvel co-productions. Director Lexi Alexander — tell us how you feel!