Dido, Girl Who Got Away

I can't recommend the entire album (unless you've been dumped at the end of Lonely Street — it plays like a break-up album), but there are three standout tracks on Dido's recent Girl Who Got Away which are on this summer's Patio Playlist:


“No Freedom”; “End Of Night”; and “Love To Blame” are getting a lot of play in this house. 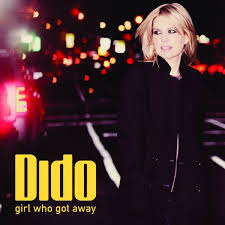 Posted by dpreimer at 2:35 pm No comments:
Email ThisBlogThis!Share to TwitterShare to FacebookShare to Pinterest

Mirror, Mirror, On The Wall: Who's The Trekkiest Trek Of All?

"The Trekkiest 'Trek' of all was an anti-action, existential feminist family drama, shot through with a persistent melancholy that reflects the crew's desperation." 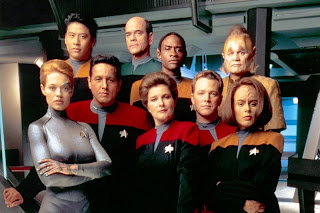 Posted by dpreimer at 9:59 am 2 comments:
Email ThisBlogThis!Share to TwitterShare to FacebookShare to Pinterest

Samantha Nelson's review of the new Star Trek video game further highlights the growing sum of disappointments that come with Abrams' "vision." Bonus: her byline ("Warp Drivel") has generated a cornucopia of Trek-based puns from her readers.

Posted by dpreimer at 10:29 am 2 comments:
Email ThisBlogThis!Share to TwitterShare to FacebookShare to Pinterest

I apologize for the blogular negligence. As summer heaves into port, my attention becomes more critically concerned with family matters and finding/establishing that coveted balance for one and all. Once that balance is found, some lengthier blog postings are sure to follow.

Til then, here's the rough material: As with his ultimate star vehicle, James Gandolfini's passing has inspired a number of critical spin-offs. The most curious of meditations is this one, an excerpt from Brett Martin's Difficult Men: Behind The Scenes of a Creative Revolution: From “The Sopranos” and “The Wire” to “Mad Men” and “Breaking Bad” (A). Ken Tucker reviews the book (very favourably), which prompts from him this observation:

“Unlike film or rock criticism, television criticism has never yielded a significant body of work—or at least an acknowledged one enshrined with any permanence in book form. Who have been TV criticism's Pauline Kaels, its Andrew Sarrises?”

I have some thoughts as to why this is so, and why this might soon change. But I will have to save that for another post in the (hopefully) not-too-distant future. 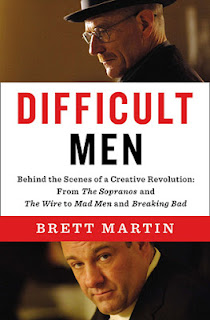 Posted by dpreimer at 12:09 pm No comments:
Email ThisBlogThis!Share to TwitterShare to FacebookShare to Pinterest

Survive the change-room, and you've (probably) got what it takes for the Big Leagues

Jay Baruchel's jaded valentine to hockey, Goon, makes such a big deal out of the titular hero's Jewishness that it's easy for this viewer to chart a subtextual question: why are there so few Jews in pro-hockey? Baruchel's answer: you've got to get in touch with your inner goon, if you're going to survive the endless feedback loop of change-room hazing, never mind the on-ice brutality. It's a backhanded compliment to his own tribe, I think, in a movie that's backhanded about everything it purports to admire.

A quick Google indicates there are actually four Jews playing in the NHL. Google doesn't help me with the next question, but from limited personal observation I'd say there are three Mennonites in NHL uniforms: Dustin Penner (L.A. Kings); Jonathan Toews (Chicago Blackhawks); and my namesake James Reimer, goalie for the Toronto Maple Leafs. My tribe is a little smaller Baruchel's, so I suppose I could take some pride in the numbers.

Perhaps I presume, but I don't imagine these three had any trouble getting in touch with their inner goons as they rose through the ranks. The Mennonites I learned how to play hockey with were as pugnacious as any other player from any other tribe, and often worse (it was a bad scene whenever our town's farm team played one from a French community). And while I could quibble with what Baruchel gets wrong about hockey, there is one aspect of the game and its culture he absolutely nails: the change-room hi-jinx.

Viewers unprepared for how crass and intimately offensive this horseplay is are likely to find the change-room scenes more disturbing than the blood-swinging-in-langorous-loops-before-it-hits-the-ice scenes. But that's how it is, at least in Canadian change-rooms. If anything, Baruchel soft-sells it.

After listening to the Q Sports Panel debate the merits of banning body-checking from Peewee hockey, I have to wonder if Baruchel wasn't cross-checked out of his own hockey playing aspirations. Tempers got warm, particularly Dave Bidini's (why Scott Walker thought he should resuscitate Mike Milbury's homophobic slur, “pansification,” is completely beyond me). In an attempt to cool things down a bit, host Jian Ghomeshi confessed he quit hockey after he got hit in the corner. Out came the horror stories, and sure enough, Bidini and Walker admitted to similar incidents.

I recall taking my first hit. It changed the way I thought about the game, in ways that flattered neither me nor the game I was playing. I finished the season, then quit — not because of the hit(s), but because I wasn't friends with anyone playing. At a certain point you have to have love for more than the game if you're going to continue. Without a baseline of camaraderie, a change-room full of adolescent boys is a Darwinian petri dish that makes ice-time look like a Strawberry Social.

So to my brothers in the big leagues, I salute you — for surviving the change-rooms, if nothing else.
Posted by dpreimer at 4:58 pm No comments:
Email ThisBlogThis!Share to TwitterShare to FacebookShare to Pinterest

The Fat Years by Chan Koonchung
My rating: 3 of 5 stars

Chan Koonchung's The Fat Years is the first and final title I've put on my “Currently Reading” list. The book has received criticism here for being stilted and didactic, but I found it quite a breezy read — until the final 25 pages, when Chan props up a puppet character to recite an “alternate” Chinese history that accounts for the month that's gone missing from the Chinese collective memory.

The missing month poses no mystery whatsoever to Western readers, and probably not to Chinese readers, either. But as a literary conceit, it's a sturdy enough vehicle to pull readers through the salons and commercial venues and evangelical Christian churches that have gone viral in contemporary rural China. The characters spend a lot of time speculating on the “lost” history, and the ascendant direction China is taking. Midway through the novel, Chan invokes Paul Auster, and though I could see parallels to Auster's baffled, anxious seekers, I found Chan's protagonists and their quest to be more akin to Douglas Coupland's determined secular materialists, who can't quite shake the paranoid feeling that Something Too Large To Be Named is shaping their destiny in manifestly unpleasant ways.

The bulk (sorry) of The Fat Years is eminently readable, but I finally ground to halt during the final monologue. The book lay beside my bed for the last six months, until last week, when I picked it up to see how much I had left to read. I was abashed to discover it was less than five pages. Those five pages didn't go anywhere I hadn't anticipated. Were it not for the rigid history of digital record, I could claim to have finished this book months ago. But you and I know the Truth.

Posted by dpreimer at 12:48 pm No comments:
Email ThisBlogThis!Share to TwitterShare to FacebookShare to Pinterest

I apologize for the lack of original material this week. Whether it's due to last week's uncharacteristic clearing of the carburetor, or to other extenuating circumstances (read: Stanley Cup Play-Offs (you know who I'm cheering for)) I couldn't say, but I'll go with "Hockey," since it naturally segues into this week's collection of worthy links.

Over at the New York Times website, Nate Silver takes up beaucoup blogspace exploring the numbers behind Why Canada Can't Win The Stanley Cup. Silver concludes with a league restructuring proposal that is so common-sensical, Gary Bettman is sure to run in the opposite direction.

Also from New York, via The New Yorker: Nicholas Schmidle fleshes in the larger story behind the murder of sniper-celeb Chris Kyle, by former Marine Eddie Ray Routh. Both men were afflicted with PTSD, Routh especially. That Routh's increasingly desperate family members were unable to procure  treatment and, especially, containment for this troubled man is a fact that brings disturbing questions to mind. In the same issue (June 3), Nick Paumgarten profiles gonzo-climber Ueli Steck, whose feats on the world's riskiest ascents beggar the imagination. Print or subscription only, in that case, so rush to your local news-rack.

The skeletons in The Ford Family Closet are rattling out increasingly funky rhythms. VICE nails it, in this compare-and-contrast piece: Here's Why The Rob Ford Scandal Is Just Like The Wire. Also, Andrew Potter thinks hard about people's unflagging support of the Ford Brothers, and wonders if Mayor Rob might not become the Amy Winehouse of Canadian Politics.

As difficult as it is for some of us to wrap our heads around the affection some people have for the Fords, there are people who felt -- and still feel -- similarly about "Dear Leader" Kim Jong-Il. His sushi-chef, for one. An intimate and disturbing look at the bizarre antics in North Korea's highest echelon.

There's your bread. Now let's get back to the circus of pro-hockey.

Posted by dpreimer at 10:08 am No comments:
Email ThisBlogThis!Share to TwitterShare to FacebookShare to Pinterest
Newer Posts Older Posts Home
Subscribe to: Posts (Atom)