Take 1, generated by this artifact.

"Now then, we really only have two types of people anymore: those who divide people into two types, and all the rest" -- loose translation of a very old Plautdietsch Mennonite joke

Bear with me, as most of this is probably wrong -- dude wrote a lot, most of which I've not read. However:
Robert Anton Wilson made a variety of controversial claims, two of which I very much admire: 1) he asserted that agnosticism, properly understood, was the more honest and difficult intellectual stance -- much moreso than atheism. I gather he came to this conviction following another illumination, namely: 2) most either/or postulates are so fundamentally flawed as to be worthless.

From here, he and his wacky wacketeers proceeded with "Operation Mindfuck," sowing mischief where certainty -- particularly of the political variety -- abounded. Through the '90s and into the Aughts I thought I admired this, also (albeit with reservations). But as events in the past year have made quite plain to even his acolytes, people with motives more malign and pointed have adopted those very same strategies to wide success and devastating results. RAW's bunch are now scrambling to launch "Operation Mindfix" -- which . . . well, good luck to us all.

Posted by Whisky Prajer at 2:30 pm No comments:
Email ThisBlogThis!Share to TwitterShare to FacebookShare to Pinterest

Some ancient history from 1991, when I first started working in the bookstore:

The Receiver there was a slender guy who dressed entirely in black and listened to the Sisters of Mercy. His shelf of special orders was a small collection of Crowley titles. I steered as wide a berth as possible around him and his freaky books (I dug the Sisters, however).

He was in the habit of tying up the company fax machine and sending long, obscenity-filled screeds to the city's radio stations. On the day management finally showed him the door, he collected his books, loped past me, then stopped, turned around, shoved a chapbook of Crowley poems into my hands and left the building.

I never took the chapbook home, but then I never threw it away, either. For all I know it still rests in the basement of that building.

Needless to say I was a tad freaked out. 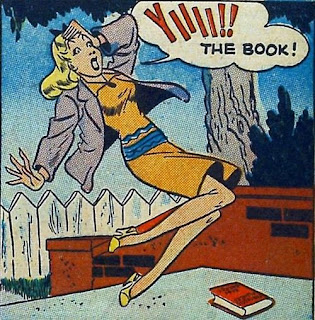 I mentioned the gift to a co-worker I was slowly befriending. He snickered. "A little worried, are you? You know, there's this form of White Magick...."

My cage now thoroughly rattled, I thanked him for his kindness but declined further involvement of the esoteric variety.

A couple of months later I bought this issue of Mondo 2000 while on lunch break. I left it on the staff-room table and got back to work.

When the afternoon coffee break rolled around I returned to the staff-room and was surprised to see my friend reading the magazine. When he wasn't devouring Jackie Collins, his literary tastes were considerably more refined than my own.

I asked him what he thought of the magazine. He sighed and flipped it back to me. "You do not want to go any further down this road," he said.

I took the magazine home and read it. Even after a thorough perusal I had no clue what he was warning me about. The Timothy Leary/William Burroughs exchange was akin to the Chomsky/Foucault meeting -- a concept more exciting to contemplate than to see in execution. Brian Eno was his usual pleasantly challenging self, the graphic layout was delicious, but the larger think-pieces were the bourgeois-gnostic variety of "counter-cultural" that I'd encountered in baby-sitters and friends with older siblings and a small handful of university mates who were taking a stab at free-thought.

I shrugged and stowed the magazine in my archives, not giving it any further consideration -- basically putting my friend's advice into practice. Or so I thought.

A quarter-century later, I can't open an internet browser without being completely immersed in the very environment he was telling me to steer clear of -- one that our former Receiver was already swimming (or drowning) in.

And neither can you.
Posted by Whisky Prajer at 8:38 am No comments:
Email ThisBlogThis!Share to TwitterShare to FacebookShare to Pinterest

We've made it to season 6 of Justified, a show that's generally been easy to watch. Right out of the gate it stayed true to originator Elmore Leonard's take on the heroic narrative -- Marshall Raylan Givens, played by Timothy Olyphant, is a man on the cusp of midlife, old enough to have amassed experience and a touch of deep wisdom, while still virile enough to attract the ladies and mete out violence.

A television series is a group project, of course, and so a departure from Leonard's template was inevitable -- and, from my POV, entirely welcome. Leonard's women tend to be cyphers whose behavior is either inexplicably impetuous or inscrutably calculated. If the novel doesn't break the 350 page mark, I don't mind giving this take on the female psyche a "pass" -- any longer, though, and credulity is strained to the breaking point. 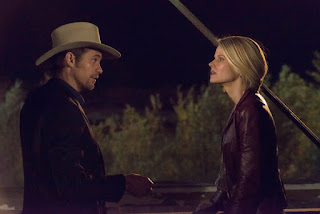 Ava is another ex of Givens, one who actually sees through the bad boy charm and thus dissipates some of the virility aura he is so pleased to exploit. She is present in all six seasons -- the contrast she brings to the Givens character becomes so persuasive the viewer is forced to concede something about Leonard's creation that Leonard, in all his years of writing, could never quite come around to: his "hero" is, in fact, an incredible asshole -- one who somehow, despite this character deficit, manages the heroic feat.

I haven't yet finished the series, so this is as far as the grand theories and profound insights go. But it's one I'm grateful for. I recently commented (to my wife, of all people) that a man who doesn't have at least one friend who knows what an incredible asshole he can be, and who calls him out on it, is a man who leads a profoundly lonely life. Story telling that tips its hat to this reality is, it seems to me, doing beholders of this particular historical moment a great favour.
Posted by Whisky Prajer at 8:08 am 8 comments:
Email ThisBlogThis!Share to TwitterShare to FacebookShare to Pinterest

Here's an artifact from '91:
I've even got the drop-out subscription card: 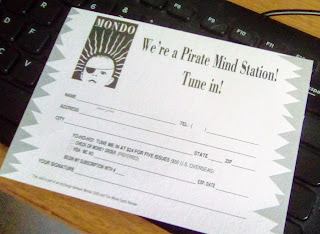 This will all lead to some thoughts on Robert Anton Wilson. Unfortunately I am way behind on a million things, including stuff that actually pulls in money. I hope to get back to this so's I can put something up this weekend.
Posted by Whisky Prajer at 8:51 am No comments:
Email ThisBlogThis!Share to TwitterShare to FacebookShare to Pinterest
Newer Posts Older Posts Home
Subscribe to: Posts (Atom)