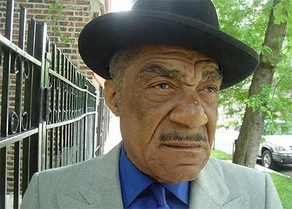 Andre Williams' most recent outing with The Sadies, Night & Day, is largely a table-clearing bellow. The press release indicates that Williams was pretty much ripped-to-the-tits recording the first portion of the album. When this bender began is open to speculation, but its conclusion unequivocally took place the day he was incarcerated. He returned to the studio a few years later, clean and sober and ready to finish.

There is certainly some buoyancy in the latter tracks that was nowhere to be found on the earlier ones. But if the uninitiated listener steers clear of the liner notes, it's anybody's guess where the turning point between belligerent rummy and wised-up 12-stepper actually takes place.

Nor does it matter. Williams is about getting the feeling right, and the words are guttural cyphers suggesting a reptilian menace lurking just beneath the placid surface of the swamp, while the glory we amphibians occasionally reach for does little more than shine a refracted light over the whole scene.

Williams stint as an early R&B man is storied. He seems to have been one of those original viewers of Superfly who rolled his eyes at what he saw, then stomped over to the record studio to lay down exactly what was what. That was a good deal more than what audiences in the 60s and 70s were asking for, but Williams survived long enough for things to come around his way. The ears of both the young and the old have grown weary of artists being pretenders to the pantheon.

Of course the flip side of bitter survival is wonderment, which Williams also gives expression to, albeit with the accompanying shadow of self-awareness. “I thank God, and a Higher Power, that I lived to see this hour,” is a pleasant sort of leaven — until it tilts deliciously back to toxic fermentation, as Williams concludes with a shrug: “I could shoot a man in five minutes.”

The Sadies and a wide assortment of R&B stalwarts take over the studio to give Williams the trippy boost his battered vocal chords and psyche need to carry the message. The YouTube samples don't have quite the same mix as what you'll hear over your speakers in the car, but go ahead and give 'em a click. Just take my word for it: the final mix was dragged through an alley full of trash, making Night & Day this year's roll-up-the-windows soundtrack. 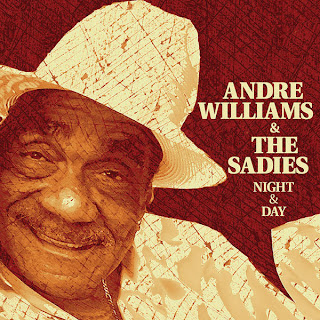 Posted by Whisky Prajer at 10:55 am No comments:
Email ThisBlogThis!Share to TwitterShare to FacebookShare to Pinterest


“Have you heard this one?” asked my friend. We were flicking through the selections in plastic troughs, celebrating Record Store Day some days prior to the actual event. I squinted at the CD cover. John Doe & The Sadies, Country Club. “No,” I admitted. I like The Sadies, I like X — how had I missed this?

“Allow me,” said my friend.

When I finally got it up and running on the home stereo, I wished I'd reciprocated and given my friend the new Chuck Mead disc, Back At The Quonset Hut, with his Grassy Knoll Boys. Both discs capture veteran acts nailing down an Old-Timey Country set. 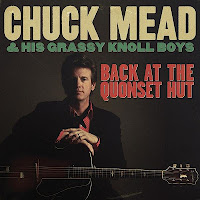 As Country Club played on, however, I began to wonder how Chuck Mead's material would have been received. Mead, the former front-man for BR5-49, has an ear for the foot-stompin', hand-clappin' songs that appealed to the straw hat and hankie-wearin' Friday Night crowd of the Dirty Thirties and Post-War Forties. The Quonset Hut in the title is probably a reference to one of Music Row's old studios, many of which were set up in these decommissioned military structures, but it could just as easily evoke the bedside pow-wow singalongs that off-duty WWII grunts resorted to in their barracks. Either way, Quonset Hut ably houses the cheer-inducing music that fed the spirits of blue-collar nation builders from days gone by. One hopes the music might still offer some much-needed uplift for a nation whose anxieties and social conflicts are not so far removed from the past.

So, yes: lots of Old-Timey uplift, slowed down a bit by a couple of hurtin' songs. What you won't find much of in the Quonset Hut is regret, dismay, irony or introspection — qualities more readily at hand in John Doe & The Sadies' Country Club. These bulk of these songs are also pulled from the past, albeit one not quite so distant: Kris Kristofferson, Johnny Cash, Merle Haggard — an era of singer-songwriters more closely associated with Khe Sanh and Nixon than to Normandy and Roosevelt. 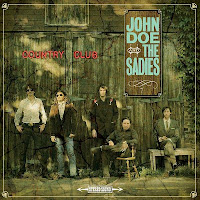 The subjects in these songs all seem to be nursing hangovers and waking up beside people they're not married to — perfect material for the nicotine-cured voice of John Doe, in other words. It probably won't shock anyone if I admit this sort of thing has an easier time getting past my defences and resting close to my heart.

Any way you look at it, neither Chuck nor John fit the current “Country” mode (people dressed up like rock stars pretending to be country singers). And nobody's putting me in the ridiculous position of choosing between these two discs, so I am happily playing them both — a great deal.

There's a post-Record Store Day follow-up pencilled in on my calendar: I think I'll be making that gift in kind after all.

Links: John Doe And The Sadies - Stop The World And Let Me Off - Live At Sonic Boom Records In Toronto from Graeme Phillips on Vimeo. Chuck Mead & His Grassy Knoll Boys - On The Honky Tonk Hardwood Floor, Back At The Quonset Hut.

Posted by Whisky Prajer at 9:45 am No comments:
Email ThisBlogThis!Share to TwitterShare to FacebookShare to Pinterest

The Hitman's Guide To Housecleaning

The Hitman's Guide to Housecleaning by Hallgrímur Helgason
My rating: 5 of 5 stars

The witless naif who wanders around a foreign environment and calls it as he sees it, unintentionally bringing the oppositional truth to light, is a literary trope that has been around since the beginning of story-telling. Just consider Adam's initial exclamation when he first encounters Eve: “Flesh of my flesh!” surely rates as the most original and mythical naif “boner” of all time.

It's hard to improve on that, but the literary impulse is relentless, giving readers a rich heritage of unforgettable naif progeny, including Don Quixote, Prince Myshkin and Howard The Duck. And now we have Hallgrimur Helgason's Turn-of-the-Millennium naif: Tomislav Boksic, AKA “Toxic,” a hit man for the Croatian mafia who finds himself on the lam, posing as an American televangelist in contemporary Iceland — very much “trapped in a world he did not make.”

Toxic navigates this bizarre world in a manner common to oafish thugs everywhere: improvising a constant stream of imbecilic lies, while exuding equal parts menace and brute sexual charm. All the while he observes and processes and alters the environment he's in, developing a perspective that becomes uncomfortably familiar. Here he follows his new lover into a furniture store, after hours:

We make our way through the office and out into the store. In back there are three king size beds on display, all made in India by twelve-year-old carpenter whiz-kids. We've tried them all, but the one behind the Kama Sutra room divider is the safest. It can't be seen from the screaming bright window out front. So after all, we manage to find a semi-dark corner in the bright and shining land. And by making the Hindu handiwork squeak, I can honor the memory of my lost [read: “murdered”] love. Still the bed holds up to all our freaky gymnastics. Those Indian kids really know their craft.

The real gymnastics are Toxic's moral equivocations, involving a body-count that begins with, but is not limited to, the 66 hits he carried out on American soil. But of course taking the life of another is just the one extreme of the moral spectrum. There's also this business of honouring the memory of his “lost” lover, to say nothing of benefiting from household items made by children in other countries . . . .

Is Toxic — are we — even capable of acquiring moral perspective in this environment? Astute readers know there is a more pressing concern on Toxic's horizon, thanks to the botched hit-job that began the novel: will he live long enough for any of this to matter?

Jonathan Lethem's contribution to the 33 1/3 library, a meditation on Talking Heads' Fear of Music, is already garnering mucho amor. I've reined in my 33 1/3 purchases — the bulk of the series only rates a "fair-to-middlin'" — but went ahead and placed this on pre-order with Amazon.ca, figuring they'd get it before I had a chance to visit any of my favourite indie bookstores.

My mistake, alas; I'm still waiting. But I'm fairly assured that Lethem's book will join the few exemplary volumes in the series. 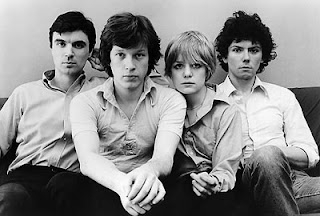