Whither the Magazine Rack?

The airport magazine rack used to be a thing of glory — not quite so glorious as the one in the city bus depot, perhaps, but still mightily impressive. Tier upon tier of selection, including exotic European variants of popular Yankee glossies. 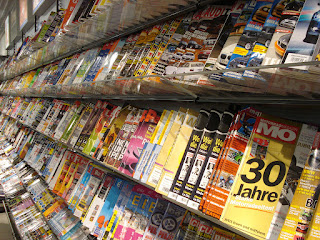 In this most recent return to the Canadian prairies I was struck by what an emaciated shadow of itself the airport magazine rack had become. The Relay shops at Toronto Pearson International, for example, all had the exact same selection regardless of whether they were single-staffed booths in the hall to the gate or larger, multi-staffed venues located in the various hubs. 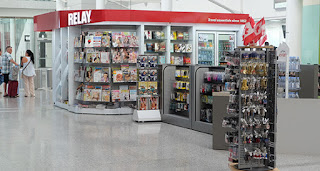 “Hundreds” of mastheads have been pared down to a few dozen. And once-popular variants like the British editions of Men's Health, GQ or Esquire are nowhere to be seen.

I was struck, but not surprised. My own magazine habits have altered radically. Ten years ago it wasn't uncommon of me to lay down money for a dozen titles in a given month. Today, a quick glance at the living room coffee table reveals the two most recent magazines purchased are . . . Revolver (June/July 2018) and Rolling Stone (September 2018). Both publications committed to a massive redesign, tooling up into a bizarre “prestige” format — super-high-quality paper, larger format, photo-heavy, etc. 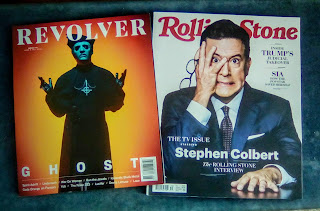 We can now add the January 2019 issue of Harper's Magazine. “Donald Trump is a Good President”? Alrighty then — persuade me, Michel.

More anon.
Posted by Whisky Prajer at 4:03 pm No comments:
Email ThisBlogThis!Share to TwitterShare to FacebookShare to Pinterest

"'Man' is obviously a problematic term"

Wup -- looks like David Cayley's been posting again. Note to self. Illich is someone I'm keen to revisit.
Posted by Whisky Prajer at 11:49 am No comments:
Email ThisBlogThis!Share to TwitterShare to FacebookShare to Pinterest 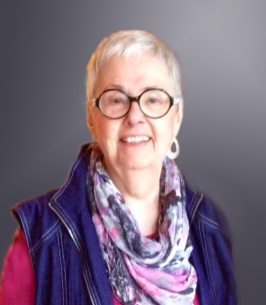 On Tuesday evening, January 15, 2019, Lois Reimer (nee Peters) breathed her last and joined her beloved Lord and Savior Jesus Christ, whom she served faithfully and honestly for over 80 years.

Joined in grief and celebration are Travis Reimer, Lois’ husband of 57 years, sons Darrell and Trent, daughter Ruth, daughter-in-law Beth Jost Reimer, and granddaughters Madeleine and Lucille. Lois is survived by brother Wes, and sisters Blondina Matheson and Gwen Froese, and remembered fondly by her Reimer in-laws and nieces and nephews, as well as friends of every conceivable acquaintance.

Lois was first-born May 23, 1938, in Bill and Adila Peters’ family farm-house, near Langham, SK. When her father responded to the call to ministry, the family moved many times to a wide variety of prairie locations. In the main, Lois characterized these relocations as grievously disruptive of her interior life. She consequently developed a lifelong love of reading and music, as well as a profound empathy for the stranger in her midst. Piano playing was her constant solace — after every move her father sought out and put her in touch with the most qualified piano teacher in the community. She quickly became an accomplished player, but was given less to public performances than to private, therapeutic expression.

Lois Peters married Travis Reimer August 15, 1961, in Steinbach, where they first met some years earlier. It was a unique partnership that began with her accompanying, on piano, his euphonium performances in church. The partnership became increasingly unique and colourful as their years together beneath God’s grace accrued — and productive, including three children who may have at times taken the example of their mother’s self-assurance and impulsive contrarianism a bit too close to heart. Subsequent church families from whom Lois benefited, and vice versa, include Steinbach EMB, Winnipeg’s Westwood Community Church, San Jose’s Lincoln Glen Community Church, Portage Avenue MB and Fort Garry MB.

Lois’s dislike of plain walls — plain anything — was visceral. All of creation was filigreed and swept through with inexhaustible beauty — to respond to this universe of delights and terrors with a determined plainness was to spit in the Creator’s face. Lois’ walls were covered with artwork — reproductions, photos, paintings, carvings, letters, you name it — and her shelves, cupboards and drawers spilled over with plenty besides. Nothing made her happier than the aesthetic offerings of her children and grandchildren, nephews, nieces — anyone who knew and loved her.

Lois’ faith was consciously informed by the faith of her ancestors, and the global faith conversation of the written word. The conversation was frequently heated, and Lois’ truest expression of it was often impassioned and discomfiting. In this she had occasional regrets, but held to a deeper belief that family, with its existential lifeblood of conflict and imperfect reconciliation and yearning for better, was the nearest model we had of humanity’s relationship to its Creator.

In her final years Lois endured rapidly advancing osteoporosis and unimaginable pain. Through it all she managed the pain and the condition in a way that allowed her near continual access to loved ones, demonstrating humility and gratitude beyond measure.

“When I’m in life’s final moments,
I will not be left alone,
For your loving wings will guard me,
I, your child, will be at home.”

Lois’ family
Posted by dpreimer at 4:18 pm 6 comments:
Email ThisBlogThis!Share to TwitterShare to FacebookShare to Pinterest

Spider-Man: Into The Spider-Verse

In the salad days of my university education (mid-80s) I would decompress from the mid-term/end-term paper/examination boot-camp by reading schmutz. Dashiell Hammett was a recent discovery, but often I just reached for the nearest Louis L'Amour novel — or, if I was pressed for time, I'd re-watch the first five minutes of Silverado.

More often than that, though, I retreated to comic books.

It was the Dour Renaissance — thank you, Frank Miller — which I was certainly digging at the time. But there was a single omnibus from 1971 that stood out as my go-to source of escapism. From one of the 'Peg's seedier comic book stores I'd picked up a used, super-cheap, extra-large edition of Spider-Man's “Six-Arm Saga.” 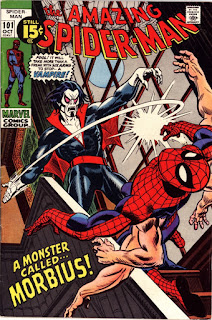 Stan Lee takes credit for the storyline, a claim that's probably not too far removed from the truth — it's goofy enough to be the sort of whimsy that occurred to him between his second cup of coffee and his morning walk to the office.

Following a run of misfortunes, Peter Parker decides he's done being Spider-Man. He retreats to the lab and pours chemicals from one test-tube to the next, until he finally arrives at — the formula that will cure him of his spider-powers! Throwing caution to the wind, Peter gulps it down, takes an impromptu nap, and. . . 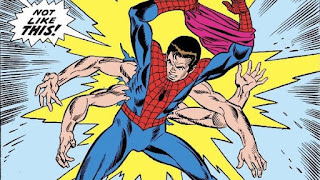 The story that follows is an adroit balance of knowing camp and soap-opera melodrama. You can't take seriously a Spider-Man who suddenly grows two extra pairs of (very muscular) arms out of his rib-cage — especially not when he quips about becoming Kafka's punchline.

But then he climbs out his window and swings off to find a scientist who can help him tweak the formula to meet its proper function, and . . . he flies out of control because the extra weight of his (very muscular) arms throws him off his stride.

Spider-Man: Into the Spider-Verse gets all the little details — and there are sooo many little details — exactly right. And it walks the fine line of batty cartoon caper/serious coming-of-age drama perfectly. When I left the theatre with my youngest, our first impulse was to dive into the many ways this film highlights just how woefully the Disney-Marvel universe has painted itself into a tiny, joyless corner.

I might yet get into that. But for now I'm just grateful to have this film resurrect the cartoon goofiness and emotional earnestness that only Stan Lee could bring to the bedrooms of alienated shut-ins and deadline-frazzled university students alike.

Posted by Whisky Prajer at 9:26 am 4 comments:
Email ThisBlogThis!Share to TwitterShare to FacebookShare to Pinterest

All I will say about this holiday season is: thank God for hospital WiFi (we are all fine, thank you). Some links that have me cogitating:

More anon, I hope.
Posted by Whisky Prajer at 9:57 am No comments:
Email ThisBlogThis!Share to TwitterShare to FacebookShare to Pinterest
Newer Posts Older Posts Home
Subscribe to: Posts (Atom)