I recently had the house to myself for a couple of nights. Consequently, I found myself in the frozen food aisle at the local grocery store -- not because I can't cook for myself, but for all the usual Freudian reasons.

Back in the '70s, if the parents wanted a date-night, the promise of TV dinners usually got me and the sibs onside with staying behind. Scorching one's fingertips whilst unwrapping the foil and straining to catch the subtle variations of The Muppet Show theme-song became a deeply embedded rite-of-passage.

As for the food, the veggies were a bust -- young consumers in-the-know choked them down first, allowing the mashed potatoes to cool from fourth- to third-degree-burn-inducing temperatures. The pressed turkey was passable, flavour-wise. But the deepest gastronomic delights -- what accounted for the texture, the somehow familiar yet impossible-to-identify flavours? -- were to be found in the dressing and the mashed potatoes. Sometimes even the cobbler dessert was deemed the second thing to go, as it rated a "meh" in both texture and flavour.

I recounted these epicurean adventures to my daughters once, when their mother was off on business. They were keen to get in on the goods (as I expected) so we indulged that very night. Lemme just say, nobody ever clamoured for a repeat of that foray -- perhaps because the dinners themselves repeated for several hours after consumption.

This time around I was considering frozen pizzas. I'm told scientific advancements have made several brands a passable pleasure. Beholding the glossy, "steaming" images, though, I knew well enough that the final product was not going to live up to the promise of the photo. I would eat said product out of a culturally-ingrained sense of thrift, and nothing in my body would be grateful for the discipline.

Instead, I went home and made my go-to comfort food -- Spaghetti Aglia e Olio, one serving. To make it a true TV dinner, I scarfed it down while watching Godless.

There are countless variations on this recipe -- its simplicity begs for improvisation. The "sauce" is essentially extra-virgin olive oil, garlic and parsley -- I throw in slivered sun-dried tomatoes and black olives and usually splash it with Pain Is Good hot sauce during the pasta-to-pan phase. The dish hits all the right childhood/childish "comfort food" flavour notes, cleans up easily and sits well.

Chop some garlic (no fewer than one clove), chop some parsley (I prefer curly to flat, but whatever), chop a sun-dried tomato (packed in oil, natch) and two pitted black olives. Boil some pasta (spaghetti for me) in salted water. Heat a glub of EVOO in a pan, with ingredients, plus some flakes of chili pepper. If you have to remove it from heat to keep the garlic from browning, that's fine. As pasta edges toward al dente splash a little of the pasta water into the pan, drain the pasta, then throw it into the pan and finish the cook. Transfer to plate, add Parmesan -- and take comfort.
Ironically, Spaghetti Aglia e Olio happens to be the first dish I associate with adulthood, as I didn't know of it until shortly into our marriage. We learned of it from Giuliano Hazan's The Classic Pasta Cookbook (Abe), one of those rare cookbooks I consider indispensable.

End-note: what, or who, is responsible for the demise of the Swanson TV Dinner? This guy says it's the microwave oven. This guy says it's those darn Millennials!
Posted by Whisky Prajer at 10:51 am No comments:
Email ThisBlogThis!Share to TwitterShare to FacebookShare to Pinterest

"Your 'Assignment,' should you choose to accept it..."

I pay visits to our Blue-and-White Panopticon -- several times a day, usually. There is plenty to protest and eschew in its matrix, but the one element a user cannot avoid is probably its most insidious evil -- the "Like" button.
It initially seemed innocuous. C'mon, you approve this message, or at least acknowledge that you've absorbed some measure of its significance to the person proclaiming it -- go ahead and "like" it, why doncha?
Posting or reading/watching anything behind the blue-and-white velvet rope is a pressing invitation to signal your "Like." This simple, single click adds up. All these "little" signals get fed into the algorithm, and your existence on the internet becomes ever more tailored to your particular . . . what? "Tastes"? "Passions"? "Cravings"? "Yearnings"? "Mortal fears"? "Obsessions"?

It's too easy, I don't trust it. I don't trust what others "like." And I think I've reached the point where I no longer even trust what I "like." I want -- I daresay I need -- to give consideration to things I might at first blush "dislike."

Hey, have you seen that new, critically reviled Walter Hill flick -- the one Scout Tafoya is absolutely gaga over?
Not me -- not yet, at least. But I plan to. I expect when it's over the experience will be akin to the last half-dozen Hill films I've sat through -- largely underwhelming, but just clumsy enough with its provocations to get me cogitating in unexpected directions. A worthy investment of time, no?

Getting back to Tafoya's terrific shout-out, I particularly dug this quote:


"Any film that has a conversation about other films and why it's better than those movies doesn't need you. 'The Assignment' does. Hill has filled it with questions he hopes an audience can answer because he seems genuinely curious, and knows that at his age some things will escape him. It needs us."

Reading that evoked memories of late-night conversations in hippie* kitchens, where so long as you spoke sincerely absolutely no question was considered beyond the pale of consideration. And couldn't we use more of that?

Alright: until next week, the balcony is closed.
*And really, what was "Grunge" but our desperate shot at a scene we'd heard the babysitter describe to us?
Posted by Whisky Prajer at 11:42 am 6 comments:
Email ThisBlogThis!Share to TwitterShare to FacebookShare to Pinterest

Funniest Marvel movie yet? Mm . . . it got a few chuckles out of me, but I would have put Deadpool and Dr. Strange -- two movies Jesse David Fox doesn't even mention -- ahead of TR.
Genuine laughter erupts from the element of surprise, and there wasn't much of that to be had in this movie -- . (Jerks.)

MZS hits all the right notes with his review ("A close-but-no-cigar movie"), so I'll send you there and kvetch instead on an element of the aesthetic that (predictably) gets me cogitating: Marvel's use of 3D CGI. I'm working with stills from the various trailers, i.e. visuals selected to quickly capture and keep viewer attention, so I can't zero in on the particular scenes that struck me. But see if you can't spot where I'm going, regardless: 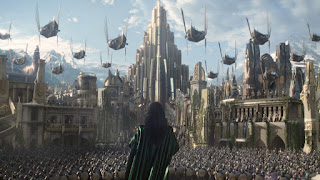 The gathered masses, a flotilla of sky-boats above a fortress city of spires -- one could argue this tableau is Kirby-esque. There is a particularity of detail, however, that . . . well, I don't know whether it would have caused Kirby to blush or turn green with envy. But for this viewer, that much "too much" nudges me into boredom.

Here's what I got when I Googled "Jack Kirby gathered masses":
In contrast to movies, comic books are an immeasurably more interactive medium. A kid can glance at that spread, flip to the exciting part of the story -- then flip back again, to catch what he missed, or just savour the artist's mastery of form, etc. A film's gotta keep moving forward til the end credits roll.

To be fair to the filmmakers, Marvel's animators seem to recognize this impediment. While other scenes and set-pieces buzz with Lucasian clutter, the battle scenes invariably resort to slow-motion -- the better for hapless movie goers to admire the CGI goods.

A veritable mudslide of detail, it nevertheless has visual narrative cogency, albeit of a rudimentary Raphaelite variety. 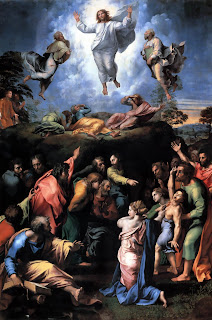 These battle scenes are visually impressive, employing an effect that, although akin to what we've already seen in the Jackson-Tolkien movies or 300, has a brocaded intricacy unique to Marvel 3D. Sitting in the middle row of a darkened theatre and watching a Marvel 3D Slo-Mo Battle Crescendo is a surprisingly miniature affair. Paradoxically, it's like watching a time-lapse video of someone engraving Dürer's Four Horsemen of the Apocalypse onto a grain of rice.

Alright, one final scene for your consideration -- take a look: 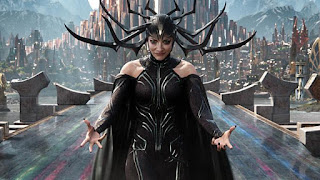 Ah, Cate Blanchett! Could anything distract from those fabulous shoulders?

500 years of protesting and reforming ... something-or-other

Hmf, somehow I missed the Quincentenary Celebration of the Protestant Reformation. Unlike my HRC friends, I can't pretend it didn't happen for good reasons. Still, I can't quite whip up a celebratory attitude, either. Perhaps it's because I gave the matter some thought earlier this year.

Posted by Whisky Prajer at 8:41 am No comments:
Email ThisBlogThis!Share to TwitterShare to FacebookShare to Pinterest

So many conspiracies -- how's a guy to keep track? F'rinstance, just this morning I read there might be a conspiracy to silence Rose McGowan:
The state of Virginia issues an arrest warrant for a California resident -- a celebrity, whose current fame is for exposing Harvey Weinstein as a sexual predator -- in relation to a Felony Drug Possession charge . . . I mean, it might be a conspiracy. On the other hand, what is to be gained by her silence? As far as Weinstein is concerned, the secret (such as it was) is out. So could this not also be a matter of the state's Prosecution receiving a preponderance of evidence to bring an indictable offense to court, as they are required by law to do?

These are troubled times, admittedly, so the one scenario does not necessarily rule out the other, alas. Still, for some reason I can't quite put my finger on, I get a little suspicious when a public figure's first claim, when facing potentially damning exposure, is of conspiracy and calumny. Let's see, who else "swings for the fences" like that? Oh, right:
We are (yet again) assured that 45 is a man of unimpeachable innocence -- because SOMEONE ELSE is out there capable of far greater, more insidious malfeasance and manipulation of The System! Wherever did he pick up a tactic like that, I wonder?

All this turtle-posting took place in 1998, when a "vast, right-wing conspiracy" attempted to undo the results of two elections -- via impeaching a President for taking advantage of and enjoying inappropriate sexual relations with a 22-year-old intern, whom husband and wife promptly threw to the sharks, the better to keep the ship of state on course.

Claims of conspiracy -- valid or otherwise -- are currently the preferred means of deflection from potential public grievance (valid or otherwise). That's just the way it is. I kinda wish we'd all go back to Sunday school, because at least Adam and Eve followed their shabby attempts at deflection with admitting their transgression. Better yet, they were banished! -- suggesting to me, at least, that often the best way to move forward is to be forcibly moved out.
Posted by Whisky Prajer at 7:06 am 4 comments:
Email ThisBlogThis!Share to TwitterShare to FacebookShare to Pinterest
Newer Posts Older Posts Home
Subscribe to: Posts (Atom)