I usually find time once a month to check in on an independent book store and peruse its wares. For the last three months each establishment I've visited has informed me of its imminent closure. So far these places have all been mediocre shops where I had to dig deep to find something I cared to take home with me. But yesterday the shop in question was David Mirvish Books. 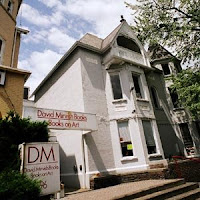 If I'd known, I would have steered clear of it: a closing book store is a thoroughly depressing experience, and I've lost the carrion-cleaning impulse of my youth.

When it was fully stocked David Mirvish Books was a gorgeous space to browse around in. It had three levels; the upper and lower floors were accessible and visible to the main floor, which had a towering ceiling and an abundance of natural light. The place was loaded with coffee-table books displayed with their faces out. The building's location was prime -- snug inside Toronto's Annex, next to Honest Ed's and an easy walk from Kensington Village. When I lived on Brunswick Avenue a typical Saturday or Sunday would start with a meet-and-browse at DM's, followed by an early lunch at one of the Annex cafes or bistros.

Book stores and libraries are sacred spaces to me. There have been times in my life when I walked into a library and wondered if what I was about to encounter would precipitate a nervous breakdown or the rediscovery of my soul -- or both. As we try to gauge the sea-change sweeping over the written word and its dispensers it's tempting to have a go at the Emersonian approach -- "Why shouldn't it be a library purely of light and mind?" Another more common temptation is to equate the approaching digital library with the historical change from horse-and-buggy to horseless carriage.

I am not immune to the appeal of that last metaphor. But speaking as a thoroughly digitized Mennonite, the generation that fully embraced the utility and pleasures of the horseless carriage sacrificed a hell of a lot more than simple locomotion up a grassy hill and through the big woods. So too the bookstore and, eventually, the library. It's fine to greet the era of easy access to volumes of information, aesthetics and thought. And it may well be that book stores and libraries will become as quaint a memory as the hot-stove and cracker-barrel. But for now they remain precious public spaces I hate to see shuttered and abandoned.

Photos cadged from here and here.
Posted by Whisky Prajer at 7:39 am 2 comments:
Email ThisBlogThis!Share to TwitterShare to FacebookShare to Pinterest
Labels: technology

I have completely lost my appetite for store-bought salad dressings. They all have something in them that doesn't sit right with me, and it's either in the flavoring or in the texturing -- or (quite likely) both. So long as the salad is hearty enough -- seeds and nuts, grated carrots, crumbled feta cheese, frozen corn, etc. -- all a salad really needs for dressing is a little extra-virgin olive oil and some salt and pepper.

Caesar Salads (my daughters' favorite) offer a particular challenge, because the traditional dressing (see Joy) calls for raw egg yolks. I tempt fate with it every once in a while, but you needn't. A perfectly viable alternative exists, thanks to chef Frank Randazzo and epicurious. I have basically halved the recipe, and it works for a dinner salad for four:

Use a "magic wand" food processor for this, and blend all the ingredients except the olive oil, which you slowly drizzle into the processor's container as the processor runs. When it's all whipped up, toss it into the Romaine lettuce leaves, along with another 1/4 cup of grated Parmesan cheese, croutons and bacon bits (if you must).

You're done. Your wife and kids will be the only ones who love you, but it's worth it.
Posted by Whisky Prajer at 5:12 pm 1 comment:
Email ThisBlogThis!Share to TwitterShare to FacebookShare to Pinterest
Labels: Recipes

"Hey everybody," announced my younger daughter, "I'm writing a play! It's called Monkey Bongo!! And it'll be performed to this music."

We'd just cleared the supper dishes from the table. Jesse Cook's Frontiers (A) was playing. My wife was home from one of her international forays. The planets were in alignment, it seemed, for our eight-year-old to create Monkey Bongo!!

As she drew pictures of monkey mischief she explained what each song on Cook's CD inspired. "Now the monkeys are resting beneath a tree and eating sandwiches. Mr. Justice Possum is lost." "The monkeys are splashing in a stream and trying not to drown, even though the water is only two inches deep!" etc.

It's a scene I reflect on, two years later. It's noteworthy, I think, that this creative rush occurred inside an environment of absolute happiness. So much artistic expression is in aid of toiling through the shadows, but this was a joyous expression on the other side of the valley. Mom is back, the family is together again! This music is so fun! I'm writing a play! Monkey Bongo!!

Cook's CD is still a family favorite. If you check out his website, "Matisse The Cat" is the song that gave rise to the title of the play. Most of the disc is devoted to Cook's wizardry with the acoustic guitar, but Melissa McClelland provides the ravishing vocals for "It Ain't Me, Babe." Listening to what she does with Dylan's "get lost" tune, I can understand exactly why she has to tell some poor sod to go away from her window.

As for the play, my daughter never managed to follow through on the original promise. But that's alright: the title and the memories are entertainment enough.

Esquire USA: Signs of a Recovery?

I've had quite a time taking shots at Esquire USA magazine since I started blogging -- my pissiest is probably this post. So it behooves me, I think, to be vocal when they're onto something.

First of all, Tom Junod redeems himself from this lamentable lapse into frivolity with this summary of What The Hell Just Happened. John H. Richardson's profile of Joe Biden is also worth reading.

And that's about it. I still think the entire editorial and writing staff should pick up a copy of Smiling Through The Apocalypse (A), head out into the Poconos and spend a weekend strategizing, "How could we do something like this today?" I'd also love to see the summer fiction issue reinstated, preferably with stories written by someone other than Stephen King. I like King's writing just fine, but I don't buy magazines for it. Regardless, the Feb/09 issue is still an improvement over the last few years.
Posted by Whisky Prajer at 1:17 pm No comments:
Email ThisBlogThis!Share to TwitterShare to FacebookShare to Pinterest
Labels: magazines
Newer Posts Older Posts Home
Subscribe to: Posts (Atom)