“THE NEW 52” — DC's ill-considered reboot of its most-recognized brands — has caught public attention chiefly for its ineptitude. If you're old enough to remember the New Coke fiasco, try imagining how that campaign would have fared if, in response to the precipitous plunge in sales, Coca-Cola had responded not by returning the “classic” brew to the shelves, but by rolling out yet another radically altered, unrecognizable recipe and calling it “New, New Coke.” So long as the beholder is not emotionally invested in the given brand, it all makes for an entertaining show.

The only DC brand that's ever mattered to me is Gotham's Dark Knight, whose character has endured any number of batty (hee!) sea-changes over the years. In his case, DC manages to at least toe the line. Writer Scott Snyder holds to Grant Morrison's mostly-reverent approach to storyline, giving readers a nameless, faceless formidable foe that appears to have the upper hand on the anally over-competent Batman. This collection (Volume 1, The Court Of Owls) is a first act, which requires the Batman be wounded and potentially down for the count, with readers wondering how this could possibly reach a pleasing resolution. It works, albeit on the same emotional level as watching one's favourite team lose the first three games in a play-off series, and no deeper.

Greg Capullo's artwork brings the edge that the material desperately needs. His primary stylistic impulse is to strike a balance between Frank Miller and Todd McFarlane. 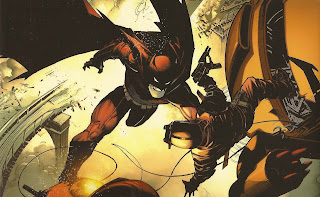 Again, “reverential” is the word that comes to mind, and since the execution is done with such brio it's an entirely laudable approach.


But midway into Batman's direst crisis, the style slips into something more akin to Mort Drucker, portraying our hero in carricaturish proportions that render him as something comically pitiable. 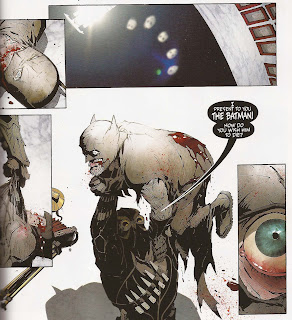 Batman rouses and rescues himself, of course, but the visual effect is surprisingly intimate — an insight into Bruce Wayne's humiliated point-of-view, certainly, but also a subtle acknowledgement of the reader's complicit participation in the hero's degradation.

So, yes, full marks from me, too. Here's hoping the other 51 can hitch up their tights and pull in a few more readers, because it would be a shame to see the entire DC edifice collapse on top of their sole compelling storyline.
Posted by Whisky Prajer at 6:51 am No comments:
Email ThisBlogThis!Share to TwitterShare to FacebookShare to Pinterest

The strange case of Sergio De La Pava first captured my attention with its Cinderella story: "Self-published author snags prestige treatment from University of Chicago Press!" When I first read the page (via this link) I considered "sharing" it via FB and all the other channels, but decided against it, since it seemed like little more than another Wacky Lottery Win story. It said nothing new about the roiling sea-change hitting the publishing scene, or the current state of American lit-fic, or really anything else beyond the fact that this dude just received a significant nudge out of obscurity.

Garth Risk Hallberg corrects this with a vengeance, over at The Millions. De La Pava seems like an interesting chap. More than that, his book looks interesting too — Pynchonian in a way that few have been able to muster (or master). Colour me curious.

Update: CT Books & Culture has a punchy, wide-ranging conversation with SDLP, here.
Posted by Whisky Prajer at 5:01 pm No comments:
Email ThisBlogThis!Share to TwitterShare to FacebookShare to Pinterest

Grace Potter & The Nocturnals' The Lion The Beast The Beat

I promised I'd talk about that new album by Grace Potter & The Nocturnals, so here we go, two years later — just in time for The Lion The Beast The Beat. 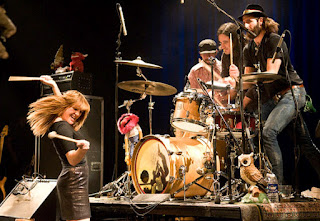 The earlier album caught my attention by virtue of the press surrounding it. I figured any band that could snag the attention “it” producer T Bone Burnett, only to turn around and show him the door, was a band worth listening to. I enjoyed what I received — a kick-ass sound somewhat reminiscent of late Lone Justice or early BoDeans. College radio, in other words, from when I was in college.

I gave that disc a fair bit of play, but it did not become the centrepiece for that summer. The Lion The Beast The Beat, on the other hand, has an early lock on that position. Potter still delivers her banshee wail (again, Maria McKee comes to mind) and the Nocturnals hold to that same tight groove that holds the blues-rock-country sound together. But there is also an entirely unexpected wild, poppy geist from left field that blows over the new collection — it can sound a bit like when Sinead O'Connor was still riding the magic; at another point it sounds like we've staggered into a steampunk version of Moulin Rouge (“Loneliest Soul”). The sustained experiment succeeds, bringing verve and snap to the familiar, and producing that rarest and most delightful of sounds: something new.

The Lion The Beast The Beat is going to get a lot of airplay in this house. Grace Potter & The Nocturnals' home is here. 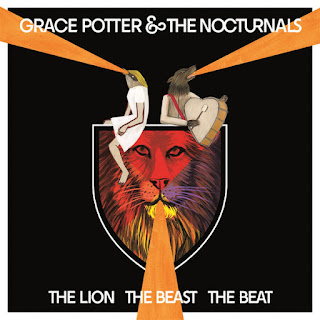 Posted by Whisky Prajer at 10:24 am 2 comments:
Email ThisBlogThis!Share to TwitterShare to FacebookShare to Pinterest

Feast Day Of Fools by James Lee Burke
My rating: 3 of 5 stars

The old gent manning the toll booth at Jasper National Park almost always had his nose buried in a paperback. One morning I asked him what he was reading. “Oh,” he said, grinning; “Louis L'Amour. Nobody writes 'em like he does!”

Midway through Feast Day Of Fools, I made a rough tabulation of how long I'd been reading James Lee Burke, and how many of his novels I'd read. My first Dave Robicheaux novel was A Morning For Flamingos, back in 1991. It's been 21 years now, and at least as many books. It's fair to say Burke has been my Louis L'Amour.

Mind you, there was a stretch of years when Louis L'Amour was my Louis L'Amour. It began sometime near my 13th birthday and concluded near my 20th, when I finally had to admit that L'Amour's authorial bag of tricks had exhausted its capacity to surprise and delight. Burke's craft is of a somewhat similar bent, but to list the strategies that have exhausted themselves with me would be disingenuous. They worked, and they worked on me — for two decades. If, to choose just one example, Gothic descriptions of landscape and weather no longer have cache with me, well ... too bad for me. They used to, and for many people they still do.

So here is what still appeals to me in Burke's writing. I love his morally conflicted characters. I love how they recognize they are at war with people who have none of their own qualms, and I love how that recognition adds to their distress. I appreciate how the bad guys are believably bad. They enjoy inflicting harm on innocents, and not in a Snidely Whiplash way, but in that odious manner you read about in the daily papers. They aren't formidable strategists so much as reptilian reactionaries, who set off a bad sequence of events, then stay one step ahead of justice or retribution by waging a constant war of fear and intimidation. How do you wage war back, without becoming like them? Protagonists who are no longer naive innocents — again, Burke's stock-and-trade hero — are deeply sympathetic people.

And of course I love Burke's social/political commentary, which is scathing and acute.

As for the Hack Holland novels, I've remarked before that the aspect I most appreciate is their third-person-limited narration. With this latest addition to the library, Burke appears to be building a recurring cast of villains and Wild Men (violent free agents who inject chaos into the plans of both the hero and the villain, usually to the hero's benefit), which has me curious about the next instalment — possibly even curious enough to pick it up and read it.

But as a long-time reader I am at the point where I have to acknowledge this book gave me two-and-a-half stars worth of emotional satisfaction, even if it employed a four-and-a-half star execution that would better work its magic on a relative newcomer to Burke.

Posted by Whisky Prajer at 11:31 am No comments:
Email ThisBlogThis!Share to TwitterShare to FacebookShare to Pinterest

Some outfit seems to have hacked into the e-mail account I use for this blog. If you have ever communicated with me at that address you've probably received a link to a bogus "home business opportunity." It's not my doing, but I apologize for it. I've changed my password and security settings, so hopefully this is the last of that mischief.
Posted by Whisky Prajer at 10:29 am No comments:
Email ThisBlogThis!Share to TwitterShare to FacebookShare to Pinterest