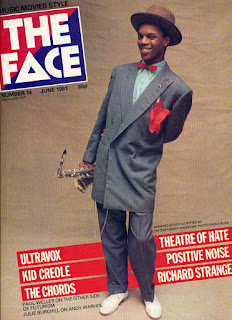 So did Scott Walker. 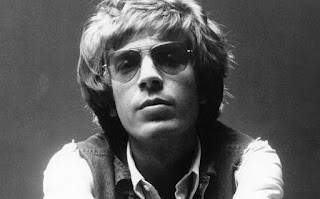 I was familiar with the former but not the latter. As usual the best overviews came from unexpected sources, and in Walker's case that was comics artist William Stout, who is a passionate fan of Walker's music. His excellent survey of Walker's strange life and music is over here. Stout has good ideas for a future Scott Walker playlist — I'm looking forward to giving it a spin.

As for Ranking Roger Charlery, my generation busted all our moves to “Mirror In The Bathroom.”
Man, that was 1980 — I was 15, Ranking Roger was 18. It still blows me away that kids that age can put together a song everybody wants to dance to. If I still had 'em, it'd be tempting to brush down the vintage double-breasted suit and spats and jump around to the ska beat. I jest, of course — I've put on four stone since that suit last fit me. Instead I'll just cue up “Mirror” for the Prajer version of “SoulCycle” — my limpid effort at delaying the Grim Reaper's tap on my own shoulder.
Posted by Whisky Prajer at 3:35 pm 3 comments:
Email ThisBlogThis!Share to TwitterShare to FacebookShare to Pinterest

Oog — tough week. I’m going to ask for a gimme, and take a stab at posting something cogent next week. Take care of each other, please.
Posted by Whisky Prajer at 3:05 pm No comments:
Email ThisBlogThis!Share to TwitterShare to FacebookShare to Pinterest

When Tom Petty died in October '17 I figured a career retrospective was likely in the pipeline. All the old hits remastered to please the fading ears of boomers like myself — even though I do not consider myself a fan, this was a proposition I could buy into. So I did. And this week I received my first Tom Petty CD.
Rolling Stone claims Petty has 50 great songs, but I found 38 to be about right for a project like this. He doesn't wear out his welcome after two CDs and Petty's late-career wistfulness sets a fitting, elegiac tone that washes over the whole thing and settles it nicely. Cameron Crowe submits a gloss with a few choice quotes that is sufficient unto the day (I wish Mikal Gilmore had been given the assignment, but oh well). As for the re-mastering...

It is a relief to have sound-files as fat with distinction as the current technology allows. But it is an incredibly bright sound. I guess boomer ears all fade differently — Donald Fagen, a notorious audiophile, prefers to release his current stuff to this particular standard as well, so it can't be hitting everyone's ears as unpleasantly as it hits mine. For me the effect is somewhat akin to hearing a child play the triangle — a little aural distance becomes a highly coveted quality.

At home, when I'm wearing the expensive, bulky headphones I can tweak things until they sound better. In the car, not so much. So it goes.

T Bone Burnett is infamously tetchy about sound, and I'm wondering if his ears aren't fading in the same direction mine are.


Back when he re-recorded a bunch of material from Proof Through The Night I wasn't sure I saw the point of it. But I recently made a playlist that juxtaposed the original Proof songs with the re-recordings. Played back-to-back, and hitting ears that have been assaulted for nearly 55 years, I found I generally preferred the more recent versions.

Anyway, in a terrific interview he recently gave to CBC's Tom Power, Burnett claims he's spent his life trying to recapture the sounds he heard in the Skyliner Ballroom in Fort Worth TX, back in the early '60s. I can hear that, and — because it's not unbearably bright and tingly — I can also really dig it. The full interview, with tonnes of juicy reminiscences and soundclips, can be streamed here or downloaded here. And he's got a new album of original material — The Invisible Light: Acoustic Space — coming out April 12. Spring cannot come fast enough.
Posted by Whisky Prajer at 8:45 am No comments:
Email ThisBlogThis!Share to TwitterShare to FacebookShare to Pinterest

At some point in my grade 10 year — generated, if memory serves, by the unexpected results of one of my mother's haircuts — I determined I was “punk.”

Winnipeg, 1981. I didn't know any punks personally, which was an asset — I could define “punk” on my own terms. I began collecting records.

I started, naturally, with the Christian Rock version of punk. Barnabas' first album was a lot of fun, and surprisingly accomplished, musically speaking. Aesthetically speaking, their attire raised the inevitable question: how much more punk can you get than bubblegum-coloured trousers?
The Canadian Bible Society also sold a few select British oddities that seemed to fit the bill — evangelical coffee-house acts with punk names like Ishmael United, The Bill Mason Band, Andy McCarroll & Moral Support, Rev Counta & The Speedos (another Ishmael project, it turned out). I listened to all of 'em.

At some point, though, I had to gamble my after-school bus-transfer and seek out Winnipeg's Pyramid Records.

Mid-winter. Cold (understatement). Tiny, second-floor room in the bowels of the Exchange. Filled with actual punks, reverently thumbing through the stacks while the snow and sand slowly dropped off their Army Surplus boots and pooled on the hardwood floor.

Import album pricing was a touch dearer than the Christian stuff I was buying, so I was mostly there for the magazines — Slash, from Los Angeles was especially cool (more girls, for one thing). As for the music, Pyramid introduced me to punk I genuinely enjoyed listening to — it was the minority, to be honest, but it was there. X, The Gun Club, The Blasters — the entire roster signed to Slash Records, more or less. L.A. Punk.

This was NOT the punk scene in Winnipeg (which existed, pretty much as described). The stuff I liked was a little too twangy, or bluesy, or . . . well, take The Blasters, for instance. How was that even punk?

Over the next 35 years I was pleasantly educated in the larger punk scene — examples here, here and here — but even today my most romantic association with the genre is centered in Los Angeles, 1979. Why, that's the era and locale Barnabas originally hailed from!

As did The Flesh Eaters — who have re-formed, with their original line-up, and are hitting the road for some select locations. Dave Alvin, Bill Bateman, John Doe — yikes. These are guys whose individual post-punk projects are still a matter of deep personal interest — including Steve Berlin, probably the only Rock 'n' Roll sax player I can say that of.

It's lovely Chris D. still has his voice. Sounds like it's lovely he's breathing a-tall — recovered sobriety is a beautiful thing. I Used To Be Pretty is a great album title for grizzled veterans, and A Minute To Pray, A Second To Die retains its happy-making powers, even after all these years. But I don't see a road-trip in the tea-leaves for yours truly. Unless they show up in Winnipeg. Who knows? It could be the last surviving members of Winnipeg's REAL punks might show up for it.

Post-script: huh. Looks like even the guys who got punk rolling can't even agree on "what is punk?" And hey: turns out Pyramid Records was owned and operated by one Don Unrau — now there's a name that's as Mennonite as Jereewen und Schmaunt (pork cracklings and cream)!
Posted by Whisky Prajer at 9:29 am No comments:
Email ThisBlogThis!Share to TwitterShare to FacebookShare to Pinterest

“Damn everything, but the circus.”

André Previn has died. Today's “youngs” think of him, if at all, as the momentary husband of Mia Farrow and the adoptive father of Soon-Yi Previn — the latter who, were we to keep track of statements made in the heat of emotionally volatile moments, he said “does not exist.” Life and drama and moral affront, eh? I suppose it all boils down to the standards one sets, really, and Previn set his in music.

It is interesting to me that Previn's creative work — the concert performances, the reams of compositions, the fluidity he had across genres, etc — all seemed so effortless. Along with his evident technical virtuosity, Previn also presented a decidedly visual ease — a plasticity of mastery suggesting mastery in all domains.
For the LIFE Magazine set Previn embodied the suave, worldly 20th Century cosmopolitan male — catnip for suburban dads and moms doing a poor job of sorting out midlife confusion, back in '69. Today we are fortunate Previn's cultural achievements were lofty enough to slip him past the notice of our Neo-Puritan Twitter Inquisitors — he dies as he lived, a man of ease, if not leisure.

Personally, I love André Previn's jazz — especially Duet, with Doris Day. Do not deprive yourself.

Okay, now what do you REALLY think — is it time to break up with the Internet?

NO WAIT! Ken Nordine also died this week.
Nordine's wasn't just a scripted mouth — he loved to improvise, to perform, to contribute to the scene. For me, the best thing he did is the first thing of his I heard: Ken Nordine's spin on “Hi-diddle-dee-dee,” a salute to Walt Disney. Listening to it yet again it I can't imagine a more apt take on the current state of affairs, out here in the wobbly West. Nordine's portion of the medley is only the first two minutes. Skip the rest, if you like. But please put on your headphones, turn it up and give it a listen — see if the hairs on the back of your neck aren't standing on end by the time the thunder clashes.
Posted by Whisky Prajer at 7:30 am No comments:
Email ThisBlogThis!Share to TwitterShare to FacebookShare to Pinterest
Newer Posts Older Posts Home
Subscribe to: Posts (Atom)