Every now and then I make a point of consulting the Wall Of Plastic to see which items are still wrapped in cellophane — usually when my wife is away on business and I've given up on sleeping, as was the case last month. Lo and behold, I hadn't yet broken the seal on the 30th Anniversary Edition of Roy Orbison's Black & White Night. I tore off and discarded the plastic, inserted the DVD into the Playstation and ...
I thought I'd already seen it, back in the day, but the set and setlist were new to me. I'd confused it with another Orbison-doo — there were a number of televised Orbison celebrations/attempts at resurgence in the '80s, most of them underwhelming.

I grew up thinking of him has a has-been — the guy in the black wig and sunglasses who'd sing “Oh, Pretty Woman” on variety shows my grandparents watched. Indeed, until I read his Wikipedia entry this morning I'd no idea just how far Orbison's star had fallen in the '70s. He went from being bigger than the Beatles in '63 to being a John Belushi punchline in '78, all while reeling from a devastating chain of personal tragedies.

Orbison's music has its challenges. The sad stuff — Cryin', Only The Lonely, It's Over, The Comedians — is so intense and strange (k.d. lang says “Roy Orbison doesn't write pop songs, he writes epics”) it did not make for rotational material on radio stations. The Texas Rockabilly material — Go! Go! Go! (Down The Line), etc. — I can listen to all day, but is still niche music that was not going to receive airplay until the nostalgia loop rotated back to the era that launched Orbison.

Which finally happened in the mid-'80s. Suddenly the big stars of the day weren't just trying to keep Orbison's star from fading, they insisted on backing him up and catching a bit of his shine. I have recollections of Stevie Ray Vaughn and George Thoroughgood serving as Orbison's humble guitarists for some televised shindig — and Thoroughgood being given the solo because he was the bigger star at the time.

But that is what they do. I suspect post-production pulled Springsteen's voice into a smoother collaboration with Orbison than was probably the case during the performance. But he is clearly there for Roy, and I should add that Springsteen proves himself to be a more adept guitarist than I've generally given him credit for. And while T Bone Burnett is fêted for making the show happen, it sure looks to me like J.D. Souther is the unelected field marshal giving all the marching orders on stage.

The evident bond, however, is between Orbison and guitarist James Burton and drummer Ron Tutt — musicians with whom Orbison played his entire life. It's lovely to see.
The bonus footage is so-so, but worth watching if only to see Orbison show up for rehearsal in sweatpants.

Posted by Whisky Prajer at 10:48 am No comments:
Email ThisBlogThis!Share to TwitterShare to FacebookShare to Pinterest

“The fray is the thing”

Wrote that in my notebook this morning — go ahead and use it (attribution is always nice, but I already presume).

Caught up a bit with my father yesterday, and he asked me why podcasts were so popular. My reflexive answer — convenience. I listen to 'em while cleaning the house, or the church. We agreed that neither of us could be bothered with them while sitting down in front of the computer — reading is just that much more efficient.

Reading is just that much more efficient. Is it really? That may once have been the case, but I'm beginning to wonder if the act of reading still merits such elevated status.

My browser history indicates I've read five long-form pieces this morning. In all cases I read the first paragraph. Once I gleaned the gist of the argument, I switched to speed-reading — centre-scanning paragraphs, searching for the element of surprise. Where surprise occurred, I stopped, returned to the beginning of the piece and reread it at a slower pace.

Here are the five links: an interview with novelist Tana French; an interview with playwright Elizabeth Chomko and actor Robert Forster; n+1's editorial on the ruinous ascent of the editorial; a glowing review of Hiking With Nietzsche; and Rich Cohen's meditation on Saul Bellow's Herzog.

I returned and slowed down for the latter two pieces. In the case of Hiking, this was the second time I'd read it. The first time I'd breezed through and moved on. Days later it showed up in several aggregates I follow, prompting me to give it more careful consideration — by the piece's conclusion the second reading struck me as unmerited, but not egregiously so. Cohen's piece, on the other hand, with its character and nuance was worth savouring.

Cohen's piece has my thoughts scattering in different directions. Monitoring Jewish responses to German philosophers is a Mennonite pastime with a very long (by Mennonite standards) history. Also: “character and nuance” — how could those qualities be so evident in this writing and so maddeningly absent in Cohen's short-lived HBO series, Vinyl? Also: I am personally overdue for a re-reading of Herzog. Etc.

It struck me then that argument has become so binary — this is not just the state of our public discourse but our private discourse as well — that there is no longer any sense of intellectual quandary being worked out in real time, or being worked out at all.
Intellectual quandary, being worked out in real time — the better podcasts retain this sense, I think, which is one significant reason why they are so popular — at least with me.
Posted by Whisky Prajer at 11:34 am No comments:
Email ThisBlogThis!Share to TwitterShare to FacebookShare to Pinterest

In 1982, midway through my 11th grade, I took a bus to a small music store on the other side of Winnipeg and spent 250 of my favourite dollars on a bass guitar. This purchase was largely motivated by what I'd seen and heard Tim Chandler do with a bass guitar in a church concert in LA in January of that year.

Chandler was the newest member of Daniel Amos, a group I obsessed over. A dishy dude with a Tom Selleck mustache, he was stepping in for DA stalwart Marty Dieckmeyer. Dieckmeyer had laid down the bass foundation for ¡Alarma!, an album I committed to memory — word for word, note for note. During that concert, Chandler proved not only familiar with Dieckmeyer's fundamentally solid bass-line, but keen to inject and resolve points of tension that were uniquely Chandler's own.

This was just the beginning for him. Good rock 'n' roll bass guitarists — think Paul McCartney, John Entwistle, even a meat-and-potatoes bassist like Cliff Williams — play just a whisper ahead of the drummer. Not only that, in many songs they introduce the melody anywhere from a half- to a whole-beat ahead of the rest of the band (listen to Williams on “Hells Bells” for a primary example of this). Chandler had these techniques down, and lots more besides.

Tim Chandler was a vigorous explorer of the pocket, sussing out every possible point of tension and exploiting it with a virtuosity that was wholly unique. On his second album with Daniel Amos — Vox Humana — the decision was made to replace the drummer with a machine, a move that would prompt most bassists to roll their eyes (“Why not just let the synth do me, too? Or the singer? Or everyone?”). Instead Chandler was all over it like a kid locked inside a candy store.

This variety of stylistic virtuosity is enough to send all but the sturdiest drummers screaming (the machine, which was never heard from again, may indeed have suffered a nervous breakdown). Drummers — in fact all band members — appear to have immensely enjoyed working with Chandler. Judging from his Facebook page, Chandler was predominantly a pleasant personality, openly affectionate, with a kid-brother sense of humour that kept the studio and tour van exploits breezy.

Alas for him and the listening world at large, Chandler grew his legs in the most fenced-in ghetto of the music industry imaginable — both from within and without. The groups he played with were not only devoted Christians, they were cussedly committed to exploring genres and styles that ran against the grain of CCM and Christian Rock. “Christian Alternative,” in other words — exceedingly rarefied stuff. If the unwary listener did not approach with an appetite whetted for exactly that, odds were stacked heavily against ever acquiring the taste for it.

In a good and just world Chandler would be an in-demand session bassist, who played with the likes of Brian Wilson and Donald Fagen. Chandler's untimely death at 58 curtails that fantasy with grim finality. 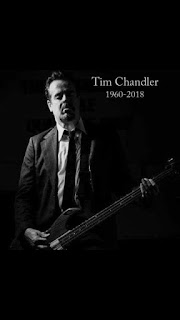 Links:
Posted by Whisky Prajer at 5:01 pm No comments:
Email ThisBlogThis!Share to TwitterShare to FacebookShare to Pinterest

I haven't watched so much as five seconds footage, yet here I am, drawn into the fray.

I have my reasons.

I've given both my daughters the “If you're at a party...” lecture.

I imagine Kavanaugh's given similar lectures to his daughters. He and I are the same age.

I would deeply dread any job interview that could dredge up episodes of my behaviour from my high school days.

If I remember rightly — and I am willing (am I ever!) to accept correction on this matter — I was frequently a jerk.
Not all the time, not hardly. And not as big a jerk as some guys were. I was largely pious, which put a curb on some varieties of jerkish behaviour (I wasn't yet a drinker, for one thing) but led to others which were inexcusably cruel — episodes where I was not just thoughtless but a deliberately hurtful and unlovable jerk. This was the general pattern of behaviour well into my 20s, I'd say. There are people I've apologized to for this. And there remain people to whom I owe an apology.

Which is all to say, I am not without compassion for Justice K_ and his family. But at the end of the day, I'm with this guy.
Posted by Whisky Prajer at 10:25 am No comments:
Email ThisBlogThis!Share to TwitterShare to FacebookShare to Pinterest
Newer Posts Older Posts Home
Subscribe to: Posts (Atom)