Another Labour Day weekend, another opportunity to move an urchin to college digs. I hope to spritz a bit about Alan Jacobs' book -- so please hang in there. Better yet, tell me what you're up to, and let's keep the ball rolling.

Posted by Whisky Prajer at 6:02 pm 3 comments:
Email ThisBlogThis!Share to TwitterShare to FacebookShare to Pinterest

“I’m thinking about resubscribing to The Atlantic,” said my father. “But I’m not sure if I should do that, or give The New Yorker a try.”

I was surprised. “My last magazine subscription expired just over a year ago,” I said. “Maclean’s Magazine.”

“Well, I’ve been convicted to do it, really. I read a piece by a Christian writer who argued against the expectation of ‘free content.’ We should be willing to pay for what we read — ‘The laborers who mowed your fields,’ and all that. I visit both those sites with some regularity, so they’re the ones getting my money currently.”

Now I’m the one convicted.
Posted by Whisky Prajer at 10:17 am No comments:
Email ThisBlogThis!Share to TwitterShare to FacebookShare to Pinterest

The Book of Weirdo

The Book of Weirdo: A Retrospective of R. Crumb's Legendary Humor Comics Anthology by Jon B Cooke
My rating: 3 of 5 stars

The book is light on art, heavy on “my interactions with Crumb.”

There are good reasons for both. Crumb, who prior to this magazine had never edited anything more commercial than his brothers’ homemade comic books, put himself at the helm of Weirdo and declared that all contributing artists would retain complete and exclusive rights to their work. FWIW I am fully on board with this element of the Weirdo credo. Unfortunately, that means the book I would love to read — an anthology of Weirdo anthologies — would be prohibitively expensive. Instead, this lovely bound book of high-stock glossy paper offers us little more than (heh!) crumbs of what made Weirdo weird.

We get photos of the various contributors, some samples of the work, more than a few brand-spanking-new artistic tributes to the magazine and the people who made it. And lots and lots of stories about what it was like to work for and with Robert Crumb.

Crumb’s a legitimate draw — larger-than-life and twice as charming/galling. But anyone who has followed his grotesquely confessional work or watched Terry Zwigoff’s documentary is already intimately familiar with the direction these accounts take.

In the best of all possible worlds the magazine rack would be regularly larded with anthologies of Weirdo, the way MAD re-packaged and saturated the market with content from the 60s to the early 90s. In this world, Gaines was the savvier publisher, who paid his artists top-market value — and not a penny more. We make do with this, because we have to.

View all my reviews
Posted by dpreimer at 3:43 pm No comments:
Email ThisBlogThis!Share to TwitterShare to FacebookShare to Pinterest

Bruce Lee seems to be having (another) moment.
The South China Morning Post reports that the Hong Kong protesters are consciously heeding Lee’s oracular advice: “Be water, my friend.”*

Quartz picked up on this and devoted yesterday’s daily bulletin to Lee. It’s quite entertaining and typically chock-full of interesting tangential links. Even this 70s kid** who kung-fued up a storm with everybody else in the schoolyard picked up some historical tidbits hitherto unknown.

Lee’s legacy is front-and-centre for another reason, of course: Quentin Tarantino’s brief, less-than-woke Bruce Lee vs. Cliff Booth skit, in Once Upon a Time...  in Hollywood.

It’s not for me to answer the racism charge, but Walter Chaw’s take on the scene strikes me as remarkably generous.*** Full disclosure: there were maybe a dozen of us at the afternoon matinee I caught, and nobody laughed at Lee’s comeuppance. Which raises another reason why I dislike the film — it is grievously low on giggles.****

As for the Lee family’s complaint that Tarantino has supplied us with a caricature of the man — it’s a fair enough assessment. In fact everyone in this movie is a caricature — doe-eyed Sharon Tate, resentful out-played-player Steve McQueen, hustler Marvin Schwarz, etc. As for Cliff Booth (Brad Pitt), it’s hard to locate whether it’s a caricature of a sixties swaggering stunt-man, or of the actor who’s portraying him. The only character who (momentarily) slips the bonds of caricature is Rick Dalton (DiCaprio), a Hollywood has-been who rediscovers his soul, such as it is, when he finally settles down, digs deep, and does the work he’s getting paid to do. Once that’s out of the way, it’s back to caricature for him, too. Why should “Bruce Lee,” who appears only for a few minutes, be exempt from this treatment?

Wait — did I just defend Tarantino?

*My friend John Longhurst points out an element to the protests unremarked upon by MSM: protesters are singing a Christian praise anthem from the 70s.

**I never owned the poster, but I had plenty of friends who did. They also bought the Lee bio-pulps that seemed to show up in the drugstore magazine stand every month or so.

***Turns out there was indeed a stunt-man/Bruce Lee dust-up that Lee conceded. And yes: Lee could trash-talk with the best of them.

****Still in the interest of full disclosure: I will admit the prolonged agony of Dalton’s well-earned pre-shoot hangover had me in stitches. What can I say? I’m a fool for slapstick.
Posted by Whisky Prajer at 1:59 pm No comments:
Email ThisBlogThis!Share to TwitterShare to FacebookShare to Pinterest

She has a plan, of sorts — but her feelings for him are an unanticipated complication.

He has a boss who hired him to stick close to her and get the dirt. Well he’s “close,” alright.

Laura Lippman’s Sunburn is a masterclass in the anatomy of human desire. Like most readers, Lippman’s protagonists and secondary characters are convinced they’ve got just about everything figured out. People are predictable, right? Almost pathetically so.

But then someone comes along who tilts the heart and subsequent motivations in an unexpected direction, and nobody’s too sure about anything anymore.

Wielding a unique subtlety of insight, Lippman deftly proves it is the familiar stories that can yield the greatest surprises. 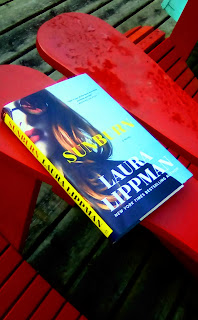 Posted by Whisky Prajer at 8:50 am No comments:
Email ThisBlogThis!Share to TwitterShare to FacebookShare to Pinterest

The Blues: To Deal With

Last night I got home, peeled the celophane off Peter Frampton, All Blues and introduced it to the media player while I prepped supper.

It’s accomplished stuff, of course — Frampton still has chops, and he’s assembled some old hands who have done good work for a long time. But midway through “She Caught The Katy” my thoughts turned glum, as they seem so prone to do these days.

He approaches the American Songbook with a laudable admixture of curiosity and respect, and the results are solid. And yet . . . look at what once was.

In his youth he wrote and performed songs everyone wanted to hear. He was glorious. And sure, he remains remarkably trim, but there’s no mistaking the voice has aged along with the rest of him. Now he is, as Bonnie Raitt sings, “standing with the rest of us/who used to rule the world.”

Circle of life, baby. And I was taking it personally. To hold off the inner torpor, I shifted my focus to identifying what I could learn to love. Frampton’s solos are good — no, great (dude, c’mon!). He favours slow-hand over shredding, which immediately earns my unwavering respect. With some diligence I could probably pick up a few licks and use 'em for my personal explorations next to the piano, always a welcome element for the others living in this . . .

Then the brush-work began, followed by a familiar three-note progression. I left the cutting board and re-consulted the CD jewel box. Track six . . . wait: this is “All Blues”? 'Cos this “All Blues” is actually THAT “All Blues” — from Miles Davis, Kind Of Blue.

I’d never heard it done on guitar before. This was sharp.

Suddenly my mood did a complete about-face.

I realized I was feeling . . . grateful.

Grateful that Frampton was still at it, that he went and did this particular song, foolhardy though that might appear. Grateful to have my morose self-absorption interrupted by something beautiful and unexpected. Grateful to still appreciate, in this day and at my age, actual grace-notes.

Grateful for the gift. Thank you, sir.

It is a unique thrill watching young talent come into its own, no?

So many youngsters take flight and stay in a holding pattern just a few feet off the floor, until boredom with the road takes over and they find their way back to less sensational jobs. But every once in a while a kid comes along who keeps reaching and stretching until (holy cow!) suddenly they’re in a feedback chamber where everything makes sonic sense in a way nobody expected. Now everything around and about them sounds new.

That seems to be where Samantha Fish is at right now. She is an absolute power-house vocalist and guitarist, who, in the last decade or so has taken complete command of the stage. She gets better with every album, and her newest, Kill Or Be Kind, seems poised to become THAT album.

When “Bullet-Proof” got its internet release I gave it a listen and thought, “How great would it be to watch her do her thing at this particular moment?” I checked her site for tour dates and . . .

. . . she was due to take the stage at the Tremblant Blues Festival in just a few hours.

It was too short notice. But now Tremblant is on my radar. Though I’m not much for festivals anymore — I did enough sitting on a blanket in a mosquito-infested field when I was in my 20s, thank you — Tremblant might actually be in my purview of interest. Blues acts from all over Canada, sharing the stage with international headliners. Book early enough and lodging will be comfortable.

Next year in Tremblant?


Posted by Whisky Prajer at 7:17 am No comments:
Email ThisBlogThis!Share to TwitterShare to FacebookShare to Pinterest

Once Upon a Time... in Hollywood

Three of us attended. And three of us thought it was a nearly complete waste of time.

A story-beat-free picture populated by dozens of mostly-pallid caricatures and one character.* I have coffee table books with more zip in 'em — and fewer feet.

How three leaden hours of self-indulgent bloat could somehow manage to twitterpate so many critics-on-a-paycheque is beyond my ken. Maybe I am (could it be??) the one who's off-base?

*Leonardo DiCaprio applies an uncommon focus that, it must be said, salvages his role (if not the movie).
Posted by Whisky Prajer at 6:40 am 7 comments:
Email ThisBlogThis!Share to TwitterShare to FacebookShare to Pinterest
Newer Posts Older Posts Home
Subscribe to: Posts (Atom)