American friends have asked me just how elated I am regarding this week's national election results.

Elated? Not at all. Relieved, certainly, although with major caveats.

I am relieved to see Stephen Harper decisively turfed from office. 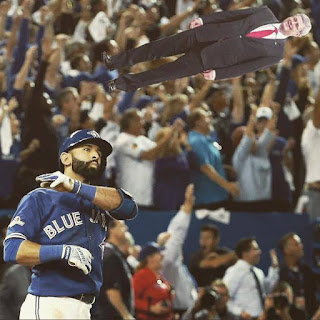 I was, to be honest, similarly relieved when he got his majority. Now there'd be no more pussy-footing around with public expectations, doling out in grandiose measure while slyly taking elsewhere. Now we could finally see exactly what he was keen to do. And we did.

Boy, did we ever.

Here is the short tally. If you'd like shorter, I shall borrow from a friend on FB: there's the contempt his government has shown toward our democratic system, its subterfuge, its malfeasance, its bait-and-switch "budget balancing," its secret trade deals, its suppression of scientific research.

Also, its almost gleeful antagonism toward our First Nations.

So yes, this week I am relieved. I am relieved that voters who can be persuaded were indeed persuaded that what this guy was doing in office was so bloody awful that voting in his alternative couldn't possibly be worse.

That variety of relief doesn't even begin to approach the heady summit of elation. Though watching the man lose to the one person he absolutely did not want to lose to does have passable schadenfreude value.

Still, I am old enough and from-the-West enough that just having to say the words "Prime Minister Trudeau" will always tend to stick in the throat, just a bit. I could say more, but Michelle Dean (once again) best summarizes my discomfit with the entire national political scene.

But why not let our out-going Prime Minister have the last word? Here is his tribute to Trudeau Senior. Lessons to be learned in this -- for all of us, I am sure.


Addendum: Wait, I lied -- let's give the final word to Drew Brown, and his ribald summary of the election for VICE.
Posted by Whisky Prajer at 9:11 am 3 comments:
Email ThisBlogThis!Share to TwitterShare to FacebookShare to Pinterest


"Those who can't do, teach." The first time I heard this canard was from a university professor of English, who punctuated it with a smirk. Comics artist Scott McCloud can certainly "do" -- but since he is best known for "doing" in aid of "teaching" in his trilogy, Understanding Comics, Reinventing Comics, and  Making Comics, his narrative efforts attract closer scrutiny than others in his cohort might expect. It's been over a decade since McCloud published fiction -- has his capacity to "do" faded over the years?

Since the days of Zot!, a little, perhaps. McCloud will always be an artist of exuberant surreal expressiveness. In The Sculptor, McCloud's take on the Faustian "bargain" is unique and unexpected. Sure, the kid gets access to unimaginable power in exchange for his life, and sure, he falls in love with his muse as his expiry date draws close. But (mild spoiler) rather than keening the expected Faustian lamentations, the kid explains his plight to his now-girlfriend, and gets her on-board the enterprise.

Other surprises ensue, but their weight will vary, depending on the degree of empathy and sympathy the reader has developed for the characters.

The title character is insufferable, the way young male arty-types are prone to be. 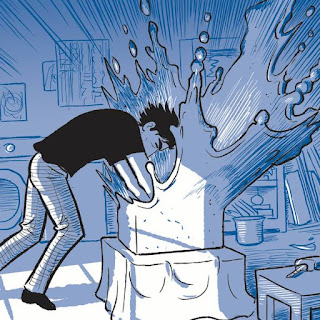 His muse suffers from a bipolar condition, but as portrayed it's a remarkably "lite" variance. 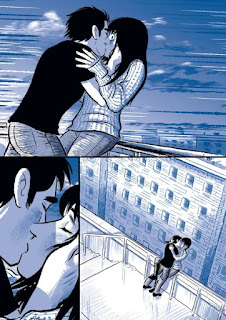 I wasn't feeling much for either character, until the final third of the book. In 500 pages of prose, this deficit of appeal would be a deal-breaker, but a flashy comic can provide a different strain of narrative persuasion. I zoomed through pages of artful maundering and was finally grateful for the experience. If nothing else, the graphic pages give heft to McCloud's final statement at the end of the book. 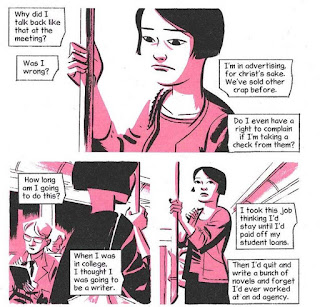 But where McCloud embraces grand surrealist motifs to explore the human and humane, Cho zeros in on finely observed day-to-day details that most people recognize. Cho's hero is less keen to dazzle the world with her presumed ability and insight than she is to escape its pedestrian disappointments. The only time she breaks free of her torpor is when she indulges in a little shoplifting.

The path to self-discovery for Cho is perhaps more mundane than it might be for McCloud, but by highlighting the "ordinary" Cho makes unexpected kindness not just convincingly possible, but transformational. Cho understands that the great narrative challenge isn't to make the universal personal; it is to convey precisely how the personal can be universal. This is a brief and powerful work -- Cho could be the Anton Chekov of comic books.

I borrowed both volumes from the library, an appropriate and recommended choice for McCloud -- my shelves are too full to add a 500-page tome I'm not entirely in love with. If you've got a younger arty-type in your family, The Sculptor could be a worthy Christmas (or Seder) gift.

Cho's Shoplifter, on the other hand, is now a welcome addition to my library.

View all my reviews
Posted by Whisky Prajer at 6:45 am 4 comments:
Email ThisBlogThis!Share to TwitterShare to FacebookShare to Pinterest

Stuff I tell my daughters, as they prepare to vote for the first time.

(Stuff I tell myself, really -- sheesh, but the cage in this zoo is gettin' high.)

You haven't fallen that far from the tree (yet -- I try not to take any commonality for granted). Everything the current PM does rankles you pretty deeply. I get that (boy do I ever). Worse, you're living in a riding that is an absolute lock for the Conservative Party. Your vote isn't going to change that -- not in the least.

On the one hand, this is great -- you can throw your vote behind the wildest kook off the left end of the political spectrum, and never be held to account for your support. On the other hand, this sucks. It feels like your vote doesn't matter. But get into the habit of participating, and don't ever let up. It can be crazy-making, but there are a couple of things I try to keep in mind, just keep my head a bit (especially at campaign time).

The first is that disappointment just goes with the territory. It has to. If it doesn't, then you've become a dangerous person

The second is that people like us generally don't do too badly under governments like this -- governments of any stripe, really. We're white. We're straight-down-the-middle. We're also in a sub-culture that looks after its own, because it can. Our vote and political participation, such as it is, is mostly an attempt to ameliorate our moral sensibilities on this basic existential fluke.

It feels like we can and should do more -- so do, starting with the immediate neighborhood. It doesn't matter where you live, things are freaky for someone. And people are trying to attend. Look for the attenders in your neighborhood, introduce yourselves and roll up your sleeves.

People are going to tell you that this (or some other) election is the most important one in your lifetime. It felt to me like the most important election of my life was '88, when Mulroney's "Conservative" Free-Trade-Agreement with the US stood in the balance. To my eyes the last 30 years have been nothing but chickens coming home to roost.

But here's a question -- who was elected Prime Minister 100 years ago? Robert Borden, that's who -- a Conservative who put the kybosh on Reciprocity, the attempted (Liberal-drafted) FTA of his day. One hundred years ago, if you were Conservative, you were pro-tariffs, and very much agin "free trade." Plus ca change, right?

So there you go. Don't get bent out of shape about it. Learn some breathing exercises, go for long walks, pray -- do whatever helps to keep your head from spinning off. Each day brings its own challenges. Lend help, and be gracious about accepting help, wherever possible.


Posted by Whisky Prajer at 9:53 am No comments:
Email ThisBlogThis!Share to TwitterShare to FacebookShare to Pinterest

Tree of Smoke by Denis Johnson


I can't claim any profundity of insight into Denis Johnson's Tree of Smoke. As I read it, the novel is a multifaceted portrait of the degree to which individuals require religious certitude in order to wage war, and the chronicling of how violence and compassion slowly disabuse some individuals of that certitude -- of, indeed, just about any certitude at all.

Johnson's book is deeply humane, in other words -- recommendation enough to take and read. But in my particular case I fell head-over-heels in love with the work as I read some 15 or so pages aloud, to my family, on summer vacation, while one of my kids sketched portraits of me into her notebook.

And though no-one in the room asked me to read the rest of the book to them (my wife would be game, given a long enough road trip), when I was finished with this particular passage all claimed to have enjoyed it. The voices were unique, easily identifiable as such, and utterly engaging as personalities with longings particular to themselves and in a life-and-death competition with the cosmos.

At my stage in life any author who takes more than 350 pages to make their point is tempting immediate rejection. But by the end of Tree of Smoke I found myself possessed by that increasingly rare frame of longing, wishing the experience hadn't ended so abruptly -- at 600-plus pages.


View all my reviews
Posted by Whisky Prajer at 9:44 am No comments:
Email ThisBlogThis!Share to TwitterShare to FacebookShare to Pinterest
Newer Posts Older Posts Home
Subscribe to: Posts (Atom)