Today's post is a bit of a "gimme" -- you know by now that I'm a sucker for the 33 1/3 publications, bad or good. In my estimation Erik Davis' treatise on Led Zeppelin's fourth album rates an "11 out of 10" (it truly is "one louder"). Most of these books are fair-to-middling. Nagy's is exceptionally good, however -- well-researched, plenty of juicy quotes from the people involved, first-rate reportage. I'd give this book a "9 out of 10."

Anyway: the elder daughter graduates this week, so activities and thoughts are a tad askew.


A four-and-a-half star rating, actually. Evie Nagy appears to have had unfettered access not just to the usual trove of archival goodies, but to the band members themselves, including Robert Casales ("Bob 2"), who died shortly before the publication of this book. In Nagy's hands, Freedom Of Choice is both centrepiece and launching-point for a considered exploration of Devo's musical, aesthetic and thematic modus operandi. This is a punchy and engaging survey of a band whose influence was much deeper than anyone originally suspected, and continues to spread to this day.

View all my reviews
Posted by Whisky Prajer at 7:01 am No comments:
Email ThisBlogThis!Share to TwitterShare to FacebookShare to Pinterest

We took a day-trip out to Petroglyphs Provincial Park, an experience I'm still processing.

No pictures, however, as per the injunction. Walking toward the building that now protects these ancient carvings from the elements, it seemed the least we curious two-faced interlopers could do was turn off our cell-phones and leave the cameras pocketed.

We were fortunate to catch the coat-tails of a tour receiving a lecture from one of the park guides. The explicit significance of the petroglyphs, to the people who carved them, and the people who now return to them on various sacred quests, is a matter of considerable debate, as well as meditation and mediation.

The Ojibwe Learning Place on-site refers to the petroglyphs as "the teaching rocks." Many of them appear to refer to agricultural, medical, and life-cycle practises. Viewing these through my usual haze of poorly negotiated Anabaptist/not-so-Post-Modernist sensibilities, I was struck by just how deeply ingrained these indigenous concepts must have been. The people who gave shape to their expression worked with diligent observation of the materials at hand and the space they were in.

To give just one example, there is an indentation at the top of the slope where iron is clearly an element among the soft marble. When the snows melt, the sediment turns red, and runs in a rivulet down a narrow crevice on the face of the slope. The petroglyph carved on either side of this rivulet/crevice appears (at a superficial reading) to depict the menstrual cycle -- an apt metaphor for spring.

This "white" boy, the father of daughters, was struck by the obvious veneration these people had for what is truly elemental to human existence. I can't begin to contrast this with our culture's squeamishness toward the subject. We seem to be profoundly alienated from something (here's that word again) elemental. That can't be healthy.

More to be said, I'm sure -- or left unsaid, perhaps. It is a place well worth one's consideration. 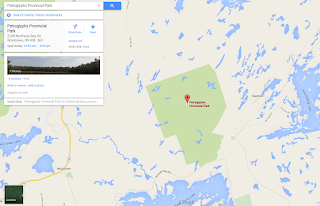 Posted by dpreimer at 8:50 am 2 comments:
Email ThisBlogThis!Share to TwitterShare to FacebookShare to Pinterest

"Would Reader's Digest Ever Condense SF Novels?" The Bitter Musings Of An Aging Reader. 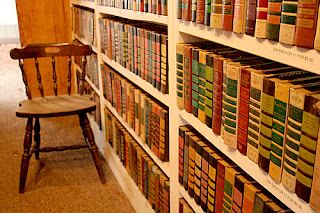 Man, those suckers used to be staples in weekender cottages and suburban bathrooms. I recall years when my parents returned from the annual Children's Hospital Book Sale with cartons full of these volumes. Reliable door-stoppers like Herman Wouk were rendered to more palatable page-counts. Quite the service, really.

Just a little tidbit of information I discovered this morning, since the question of their existence came to mind whenever I picked up something by Neil Gaiman.

I've just pushed past the halfway-mark of American Gods, so the likelihood of completion is very high. But picking it up and opening the book is only always a conscientious decision on my part -- akin to picking up my guitar and practicing scales. Once I get rolling I usually find myself enjoying the activity. But more than 30 minutes of it is difficult to manage.

I'm not entirely sure what's going on, here.

A big part of it is readerly preference: as with Stephen King, I suspect a reader either loves Gaiman's work, or is indifferent to it. I've read (heard, rather) Gaiman's Anansi Boys, and pored through the first two volumes of The Sandman. He's clever with concepts, steers pointedly clear of prosaic pyrotechnics, yet still manages to evoke the surreal -- all very good reasons to become a Gaiman devotee.

And yet, no matter what the medium, I get impatient reading him. I don't, finally, invest myself in his characters. Once I've finished American Gods, I will almost certainly be finished with Gaiman.

Which is kind of painful to admit, because I pretty much adore the man's concepts. A war between the ancient pagan deities our ancestors imported from the homeland and the modern pagan deities we've created since is a kick-ass concept. But 500 pages is roughly 250 more than I'd care to read on the matter.

Blasphemy, I know. Gaiman's faithful don't just embrace the original content, but everything extra besides. They hardly need my aging eyes and addled brain among their august ranks. But if, say, Reader's Digest were to focus their quarterly efforts on Gaiman's catalogue, I might just join both companies.

Post-Script: Maybe Neal Stephenson is another "condensed books" candidate? And, hey: check out what this woman does with RDCBs. Pretty cool!
Posted by Whisky Prajer at 9:57 am 10 comments:
Email ThisBlogThis!Share to TwitterShare to FacebookShare to Pinterest

I Will Make You Reapers Of Men: The Gospel, According To Helfer & Baker's The Shadow


If the superheros of the '80s seemed to be suffering from Messiah Complexes, it was little wonder: most, if not all, endured a death-and-resurrection story-line. Spider-Man took a two-week dirt nap, in J.M. DeMatteis' psychonautic 'stravaganza, Kraven's Last Hunt: 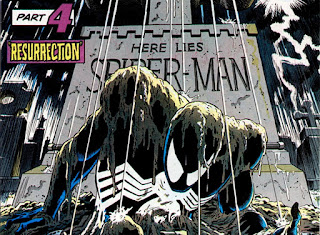 And, of course, rumours of Batman's final demise were greatly exaggerated in the concluding chapter of Frank Miller's The Dark Knight Returns. Soop might have won by a heart-attack, but Bruce Wayne's ticker returned to form once the body was committed to the earth.

But in both these cases, as in most others, the "death" in question was a ruse: Spidey got tranked by Kraven; Bats staged his own take-down, with one of those death-faking drugs common to serials of all stripes.

Was The Shadow's death a similar narrative sleight-of hand? In the final issue of The Seven Deadly Finns, Andrew Helfer gave readers of his letters column this to look forward to: 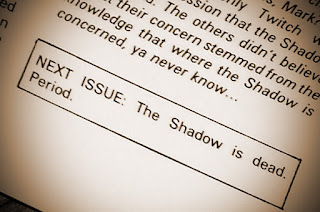 Readers searching the forthcoming pages for some glimmer of hope were treated to glorious scenes of The Master's corpse being subjected to indignity and abuse in increasing measure -- bounced down a Himalayan mountain... 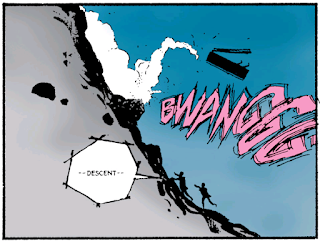 ...riddled with bullets, while being used as a shield... 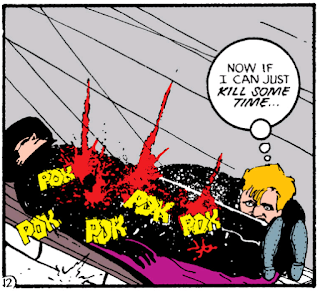 ...and finally decapitated by a helicopter: 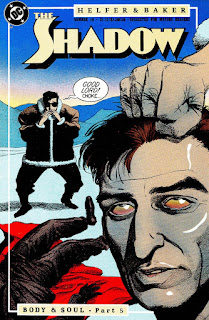 While writer and artist ramped up the irreverence toward the title character, The Shadow's grieving agents were abruptly changing their tune and pointing their attitude in the opposite direction. 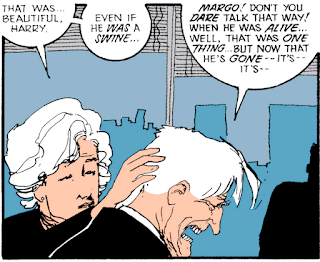 In the preceding episodes, The Master may have proven himself, again and again, to be a hard man, reaping where he had not sown, and gathering where he had scattered no seed.* But now that he's removed from the narrative, his disciples discover, for the first time, how pathetic their lives were before being enlisted in The Shadow's service, and how much worse they've become since his death. The betrayer feels this absence most keenly of all:

The agents decide to address the Shadow-shaped void in their lives by taking up his Uzis and committing themselves to his ways. It is a less-than-seamless transition.

The work continues apace, albeit via exponentially chaotic means. The agents are faced with a singular crisis of identity -- without His, they don't have one of their own. Not one that agrees with them, at any rate.

The Shadow's head is eventually re-animated, his identity and unassailable self-regard very much intact. When joined to a Robocop-like body, he finally becomes the killing-machine he's always considered himself to be. 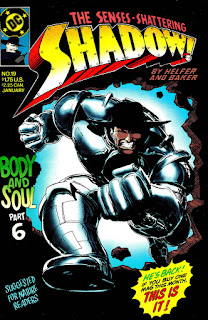 The Master's final act on the final page of the final issue is to recruit yet another of society's rejects. His sons' reaction is altogether reasonable: 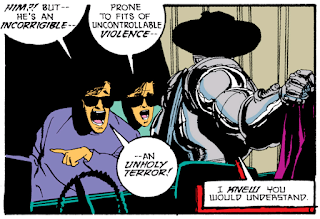 The Shadow as Christ-figure is rich with ironies. For starters, his behaviour is pretty much of the Messianic variety that Jesus' original audience was hoping for -- ruthlessly violent toward all oppressors, and even the occasional innocent bystander, in the aim of re-establishing a more agreeable order. For these messiahs, transformation, if it occurs at all, is strictly superficial -- a precondition that's perfect for comic books, and cause for lots of impious fun when staged by the likes of Helfer & Baker.

For me there is a deeper and more pleasing irony present, in the Shadow-Messiah's most defining characteristic: his meta-cluelessness. His followers ascribe staggering powers to the man, and while he does prove himself a capable tactician as well as adept improvisor when the need arises, his continuous monologue of self-narration is frequently at odds with the larger narrative on display. Consider again how he kills Artimus Finn, the last of the "Seven Deadlies," unintentionally, by merely taking an elevator to the next floor: 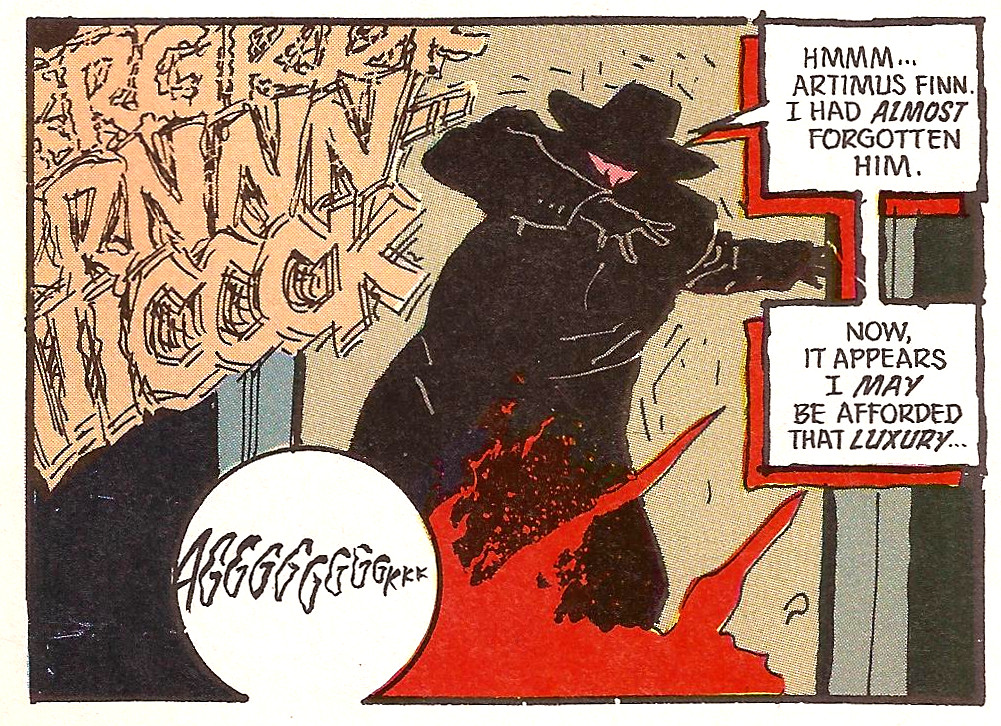 The Shadow narrates the story as one where he is finally in charge of all fates. The story we read suggests his fate is assisted by no small dose of . . . luck? Or perhaps by an over-arching narrative design, of which he is -- by design -- ignorant? By this point, I start to wonder if Baker & Helfer weren't gearing up for a po-mo meta-meta-reversal, a la Chuck Jones' Duck Amuck.

Jesus in the Gospels was, of course, a master at affecting meta-cluelessness. To take just one example from his Sermon On The Mount, here is how he cautions his listeners against considering themselves more compassionate than their Heavenly Father: "Which of you, if your son asks for bread, will give him a stone? Or if he asks for a fish, will give him a snake?" One imagines jokers like Helfer and Baker giddily spinning this insight into absurdist comedy -- "Or, if he asks not to drink of the cup, is never the less..."

But then this is indeed how the gospel writers (of Matthew and Luke, at any rate) very intentionally frame the proposition of God's perceived deficit of mercy. Whether one registers this frame ironically or not depends upon the ears of the listener.

The beauty of the Helfer-Baker Shadow-Messiah story-line lies in the reflection of the fun-house mirror they hold up to the canonical gospels. It's ridiculous fun, minus the ridicule. And that is why, in my near half-century of reading comic books, this series remains my favourite to date.

Pester your local independent comic book store for copies. Or go Amazon. Or grok on the HD glory of their digital enhancement via comiXology.