How are we going to manage President Trump?

As a non-USA citizen, I think I can safely claim to speak on the rest of the world's behalf and declare this the preeminent question on our collective mind.

For some it's a practical concern. He wants to build a wall, put a halt to Muslim immigration, repeal large portions of NAFTA . . . so on and so forth. I am neither a Mexican with dreams of El Norte, nor a Muslim fleeing homeland turmoil/seeking reunion with my recently-settled American family members. Reintroducing tariffs to NAFTA, on the other hand, might have an effect on my comfort. At this point it's too early to say. Besides, I publicly opposed NAFTA in the original go-round -- I'd be a hypocrite if I expressed consternation at this particular Trump policy-bashing.

For most of us it's a psychological concern. This is a guy we'll be facing every single day -- whether we turn on the television, log on to the internet, glance at the magazine rack, or play the radio while driving the kids to soccer or grandma to the doctor's office. For those of us who thought we had too much exposure to the man decades before he jumped into politics, this will require a substantial shift in the parlour of our consciousness. He's been banging at the windows for the last 30 years -- now he's in Father's chair, fer cryin' out loud!

It's not an appealing prospect, to put it mildly. But we'll manage -- if manage we must.
Banging at the windows -- wow, have I worked hard to avoid media coverage/analysis of what's going on. Part of that is this whole business of ignoring the rough beast slouching toward Father's chair. But the other part of my reflexive avoidance is the forehead-slapping that occurs when I actually attend. These guys don't get it! He's soaring for a reason, and it's not that his base would otherwise flock to the nearest Klan rally.

There are exceptions. Matt Taibi, f'rinstance:


"No one should be surprised that [Trump is] tearing through the Republican primaries, because everything he's saying about his GOP opponents is true. They really are all stooges on the take, unable to stand up to Trump because they're not even people, but are, like Jeb and Rubio, just robo-babbling representatives of unseen donors."

And, for those of a more conservative bent, Robert W. Merry.

Finally, a word to my fellow Canuckle-heads: those of you expressing smug, superior, "witty" opinions on what's happening to the south of us -- yeah, I'm looking at you, The Canada Party and Cape Breton If Trump Wins -- knock it the fuck off. We're the country that only yesterday indulged in supportive nepotism and gave our highest office to a Drama Teacher, the son of a former Prime Minister.

This shit happens everywhere.
Posted by Whisky Prajer at 10:31 am 2 comments:
Email ThisBlogThis!Share to TwitterShare to FacebookShare to Pinterest

"157 posts" -- prolific sod, wasn't I? Some posts are better than others -- these ones, for example, beginning again with The Rodent: 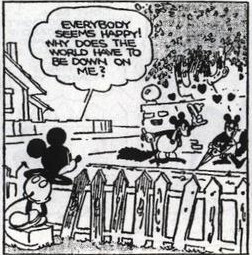 I'm starting my own cult.

Posted by dpreimer at 7:06 am 5 comments:
Email ThisBlogThis!Share to TwitterShare to FacebookShare to Pinterest

I still haven't seen Deadpool -- wasn't even remotely considering it, really. But this video (via io9) has upped my curiosity quite substantially:

Immediate thoughts: 1) assigning the title character a retro "Jan Hammer" synthesizer theme to contrast with the luscious, stringed hero-themes of the movie's other Marvel characters is absolutely brilliant; 2) requiring said synthesizer theme to be performed with actual retro synthesizers is just a bit . . . twee, no?

All these sounds, after all, are banked up digitally. If you can't get the exact loop you're looking for, you can always sample something close to it, then isolate and tweak that to your satisfaction -- right?

I didn't want to pronounce on the matter until I'd consulted with my uncle. For a stretch of Christmases, when I and my siblings were kiddies, our uncle would arrive on the scene with the latest keyboard hot off the assembly line, plonk it down on the coffee-table and let us play with it. Consequently, I can attest to the stunning durability of the original Oberheim.

It turns out the issue of synthesizer tone has, like its cousin guitar tone, nuances within nuances. The long and short of it is the various chips and what-nots that produced these early synthesized tones produced analog sounds. For some people the character of those tones matters a great deal.

And perhaps I make "twee" sound like a bad thing. A band like Metric, when it performs in stadiums, doesn't need a retro ARP sequencer -- heck, they and their most rabid fans are close enough to the EDM scene they don't need instruments at all. But the countenance of an ARP sequencer is admirably dramatic -- whether or not it gets played, that beast brings character to the show.

Anyway, Unk assures me that often the fastest, most direct way to get retro sounds is to pull the old equipment out of the basement, dust it off, hook it up and play. What's more, there's an infectious joy generated by these retro-fiddlings -- keenly on display as composer Tom "Junkie XL" Holkenberg explains how he got what everybody wanted.

Behold, the old is made new.
Posted by Whisky Prajer at 12:04 pm No comments:
Email ThisBlogThis!Share to TwitterShare to FacebookShare to Pinterest

After spending an hour or so re-reading myself, I am well and truly cured of any impulse to smirk and quote Oscar Wilde at customs. We learn as we go, don't we? (Well . . . I do, at any rate.)

Here are a few posts from 12 years ago that still read not-too-badly.

Posted by dpreimer at 9:28 am 3 comments:
Email ThisBlogThis!Share to TwitterShare to FacebookShare to Pinterest

This "Deadpool Pencil-Jar" struck me as super-cool, when I first saw it.

That was two years ago. I knew nothing about the character, but I hoped he'd be a mainstream version of Marshal Law, minus the near-pornographic acidity.

With the right writer-artist team, that's pretty much exactly how Deadpool succeeds. Those moments are preciously rare, alas.

Two recent Deadpool histories -- from io9 and the Onion AV Club -- portray a character who (like Harley Quinn) has a level of sass-appeal way beyond the ken of most stabled writers. Early Deadpool runs take him in one of two directions -- revealing some of the character's unexpected humanity, or inflating his "merc with a mouth" anti-hero status to absurd proportions -- crossing the Punisher with Spider-Man, basically. Either direction yields predictable results -- comic book (and movie) tedium.

Deadpool works best when he surprises everyone, including (one senses) even the writers and artists at work. Deadpool Dead Presidents is probably the best comic book example; the Deadpool video game is even better.

Beyond that I cannot and will not comment, except to say, Avoid the early Rob Liefeld material. Should you read (or subject yourself to) these stories, you'll not have the remotest idea of how this character could possibly appeal to anyone older than 12. 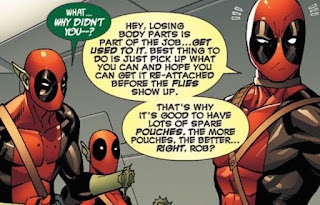 Posted by Whisky Prajer at 9:51 am 5 comments:
Email ThisBlogThis!Share to TwitterShare to FacebookShare to Pinterest

Pentatonics 'Til The Cows Come Home

The most memorable exchange I overheard during this concert occurred just after Animals As Leaders had finished their set. Some college kid was asked what he thought. "That stuff doesn't impress me," he said. Really? "Nah, man. It's all pentatonics. I could do that shit 'til the cows come home."

To be fair to the kid, it smelled to me like he was smoking some primo grade skunk.

Learning a few (well . . . five, no?) pentatonic forms can be a mighty heady experience, to be sure. Even a thick-fingered mid-life noob like myself notices a certain change in receptiveness to the guitar solos of old. The razzle-dazzle factor does indeed subside, just a tad. Take this tasty riff from Blue Öyster Cult, for instance:

Just to be clear: I am not claiming I'm capable of repeating, let alone cooking up my own "Buck Dharma" riff. But I'm recognizing these as possibilities within reach. And there is something disillusioning about that.

Buck got there first, of course, and deserves all the kudos for it -- and for inspiring God only knows how many kids in suburban basements. Bansai, Oshō!


The blessed flip side to my predicament is recognizing the impossible and gaining newfound appreciation for the likes of Eric Clapton and Robbie Robertson -- Alex Lifeson (of course) -- people with technique I can't begin to emulate. To say nothing of countless Blues artists living and deceased, and the performers who have honed their own distinctive sound. So, bansai, jōza!
Posted by Whisky Prajer at 9:29 am 2 comments:
Email ThisBlogThis!Share to TwitterShare to FacebookShare to Pinterest

The Levitz Paradigm: "The best imitation of life possible in a work of fiction"

It is possibly the predominant narrative mode in Western movies, television, comic books, what-have-you. And now I learn (via Warren Ellis (via Gene Ha (who cribs it from Dennis O'Neil who deems it "the best imitation of life possible in a work of fiction"))) -- it has a name: The Levitz Paradigm. This is how it works (O'Neill):


Basically, the procedure is this: The writer has two, three, or even four plots going at once. The main plot — call it Plot A — occupies most of the pages and the characters' energies. The secondary plot — Plot B — functions as a subplot. Plot C and Plot D, if any, are given minimum space and attention — a few panels. As Plot A concludes, Plot B is "promoted"; it becomes Plot A, and Plot C becomes Plot B, and so forth. Thus, there is a constant upward plot progression; each plot develops in interest and complexity as the year's issues appear.

It's a grid. Rather plain, no? But from such unadorned schematics come fabulous narrative sleights-of-hand.

Most movies hew closely to this model -- the norm for Hollywood blockbusters is two, maybe three plots in flux. Consider how Mad Max (with its two conjoined plots) resonated more resoundingly with critics (and esteemed members of the Academy) than did Star Wars: TFA (which clearly boasts four, possibly five, developing plots -- or more). In contrast, television creators (like J.J. Abrams) have become increasingly sophisticated -- if not necessarily disciplined (again, J.J. Abrams) -- about the Levitz Grids they build.

The Levitz Paradigm is fairly common to genre novels, and nearly unavoidable in the geekier realms (Levitz' Wiki lists Tolkien and Zelazny as credited influences).

As for comics, fuhgeddaboudit. This is what Alan Moore's Levitz Grid looks like for a planned 12(!)-issue run called Big Numbers: 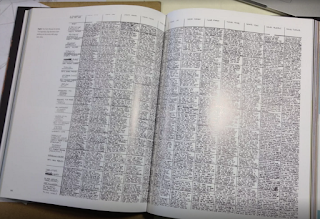 Ha points out that by issue 11 Moore had to add another letter to the alphabet. A shame, then, that only two issues were published -- wiki.

I'm under the impression that high-brow literary types mostly eschew something this rigorous, but that could be a slanderous misconception on my part (Ellis begins his observations on the matter by pointing out that James Joyce drew two charts that converge for Ulysses).

When it comes to reading novels, I'm more drawn to books with a single, dominant voice and its singular POV. This mode doesn't preclude a Levitz Grid, but multiple plotlines are by necessity channeled and filtered through a single consciousness. It's easier to read, in a way -- chalk the preference down to laziness, then.

Mind you, it could also be an unconscious recoiling from early and continuous exposure to the Bible, with its legion of voices and perspectives competing (often violently) to find a unifying theme. In which case, I say thank God for the likes of Miles and Frye, and their discerning eye on the Almighty's own Levitz Grid.
Posted by Whisky Prajer at 10:36 am No comments:
Email ThisBlogThis!Share to TwitterShare to FacebookShare to Pinterest
Newer Posts Older Posts Home
Subscribe to: Posts (Atom)