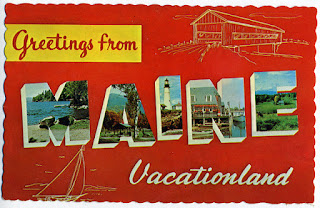 Greetings from the beaches of Maine, where the lovely Quebecois women smile when they catch you looking at them, or turn surly if they discover you are not.

We had rain the other day, and beat a short retreat to the city. When I staggered through the doors of the mall and into its frigid clime, the first sight to greet me was a large “entertainment” store, selling a now-unusual abundance of inexpensive CDs, DVDs and related tech. Assured of my place for the next few hours, the women of the family happily moved on to more promising commercial vistas.

I collected armloads of goodies, of course. The chap behind the counter read my credit card and said, “God bless you Canadian patriots!” I think he meant to say “citizens,” but I was so tickled at the thought of usurping Don Cherry from his singular post I didn't bother to correct. Instead I asked, “How's business?”

“Oh, just abysmal,” he cheerfully assured me. He went on to say that in the heyday of his 23 years with this outfit, they'd had over 200,000 stores. That heady number had collapsed to just under 500 and he saw no reason to think he'd make the quarter-century mark as a company man. “Amazon has bought the state's old General Motors plant, and several empty hangars besides. They're offering same-day shipping, which I figure will pretty much close this entire mall.”

How has Amazon flourished so brilliantly in this country of extroverts? In Canada, it makes perfect sense to have a shuttered, mercantilist hegemony like Amazon. We dislike leaving the driveway, and fear the larger consequences of doing so. Making eye-contact with strangers, or even (God forbid!) small-talk? No, it's much better to stay at home and turn on the TV. In America the only people who can be found at home are hosting someone else at their table. Americans live to engage, and removing them from the physical marketplace seems a deliberately cold and cruel irony.

But that's the way things have gone. As I tore the celophane off my newly acquired jewel-boxes I thought of a conversation I'd had the previous week with my friend K__. Through the 90s and into the Oughts, K__'s instinct for the bleeding edge of music kept me effortlessly abreast of who was who. Now when I ask him what he's listening to, he says he doesn't know. He downloads musical podcasts released by the hip young curators of teh interwebz and listens to them at work. If something catches his ear he takes note of the podcast playtime, and later excises the portion that tickled him and adds it to his own larger playlist. But song title, album, band name? Immaterial, when there is so much (too much?) yet to be discovered.

I abuse the metaphor, but cloud technology is where we are headed because that is where our collective consciousness already resides. Only occasionally within this sludge do genuine distinctives surface.

So, back to the solace of the beach. Young or old, Quebecois or Canadian patriot, male or female or something not so bluntly identifiable, here we all gather, nearly naked, padding about the same sandy shore, bobbing within the same churning waters. The smiles are welcome, but so are the shrugs, the studiously averted eyes and the unexpected blushes. Distinct in a sea of generalities, we are what we are: painfully, delightfully strange — to each other, and even to ourselves. 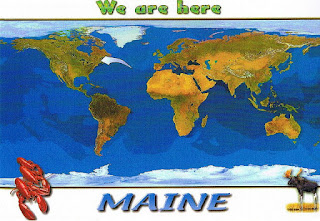 Posted by Whisky Prajer at 1:06 pm No comments:
Email ThisBlogThis!Share to TwitterShare to FacebookShare to Pinterest

A public service announcement from my elder daughter, who had cause to remember an incident from last summer: If you are touring Alaska, do yourself a favour and do NOT book with an advertised "Salmon Bake." That is remarkably fresh fish, to be sure, but what those cooks do to it over an open flame is a desecration.
Posted by Whisky Prajer at 10:05 am No comments:
Email ThisBlogThis!Share to TwitterShare to FacebookShare to Pinterest


Lewis Chopik is in a bad way. He's just graduated with a perfectly useless literary degree from Columbia, while his feminist ex-girlfriend has graduated to a more prestigious boyfriend — a tenured professor. With his ego and libido in ruins, Lewis accepts an invitation from his New Agey mother to stay at her house in Wichita for the summer, while she gets her tornado-chasing tour business up and running.

Lewis wonders just how prepared he is for the scene that awaits him in Wichita. But how, exactly, does a guy prepare himself to be around his bipolar younger brother Seth, their erotically supple mother and her various off-the-grid companions? There is no preparation for this scene; best just to dive head-first into the maelstrom, and hope for the best.

Thad Ziolkowski's picaresque first novel reads somewhat like a hybrid of early Robert Stone (Dog Soldiers) and John Kennedy Toole (Confederacy Of Dunces). There are plenty of off-color, wryly-observed misadventures to be had in Wichita, but the cold undertow of Seth's genuine struggles with mental illness keeps the larger narrative from eddying into counter-cultural farce. In this regard, Ziolkowski's writing puts me in mind of another contemporary: Miriam Toews. Readers of Ziolkowski's earlier book, On A Wave (the best coming-of-age surfing memoir to hit the shelves), recognize Seth as a fictive stand-in for Adam, the author's late younger brother, to whom the novel is dedicated. As with Toews, there is a creative acknowledgement of the surprise adventures that arise from a chemically beleaguered brain. Unlike Toews, Ziolkowski has no religious bogeyman to which he can pin the ghastly collapse that punctuates these bipolar episodes.

Ziokowski's strikes me as the more poignant approach. As the tornado closes in on the small community of off-beat but recognizable characters, the reader has to wonder if our society — or even our species — isn't possessed of a bipolar disorder. I mean, for Christ's sake: we've gone and changed the weather. Like Ziolkowski's tiny community in Wichita, we are lovable, contemptible agents of unmanageable change. What do we do — what can we do — in the face of the coming storm?

View all my reviews
Posted by Whisky Prajer at 11:27 am No comments:
Email ThisBlogThis!Share to TwitterShare to FacebookShare to Pinterest
Newer Posts Older Posts Home
Subscribe to: Posts (Atom)