This is my first Tim Powers novel, which I bought after reading Cory Doctorow's recommendation on Boing-Boing. Actually, "recommendation" is an understatement. Doctorow's recommendations are stoked with the heat of religious fervor (his byline "Medusa's Web: Tim Powers is the Philip K Dick of our age" may not contain any exclamation marks, but by now most readers unconsciously insert three) and I've learned to be cautious to the point of skittishness when he shills for an author. Still and all, if even a street preacher hits enough of the right notes -- and Doctorow does, beginning with Dick and moving on to Old Hollywood, House of Usher, occult histories and parallel realities fighting for domain -- I will stop in my tracks and give due consideration to The Product on offer.

Comparing Powers to Dick is, occasionally, apt. Like Dick, Powers' concern with character takes a second place to the preeminent concern with environment. Powers' Hollywood is a locale where addiction is the norm -- in this case, the desired "high" occurs when occult dabblers enter a two-dimensional spectral plane, resulting in temporal disruptions of increasing violence in the Here And Now. There are hapless virtuous types and their opposing villains, and mysterious agents roaming the back alleys, but I found the emotional drama surprisingly thin. I didn't particularly care how things turned out for the protagonists, but it seemed clear from the outset that Powers did -- he was straining for resolution. And this is where he departs from the phildickian template.

I read to conclusion because I was curious how -- indeed, if -- Powers was going to manage this feat. As the book wound up the environment became increasingly harrowing, and though I remained apathetic to the characters' fates I easily imagined the shock of discovering myself in a similar environment, flailing wildly to find purchase in some larger, grounding reality. So: we return again to Dick.

Powers achieves a resolution of sorts. Readers who care about the characters will care about the finale. I didn't, on both scores. But Powers' evocation of environment was persuasive enough that I'm curious to read (a little) further. I found Hide Me Among The Graves and Three Days To Never on the sale table. I'm not sure which I'll reach for next -- if you have recommendations, I'm all ears. In the meantime, stay tuned for more.

View all my reviews
Posted by Whisky Prajer at 12:35 pm No comments:
Email ThisBlogThis!Share to TwitterShare to FacebookShare to Pinterest

Neither age nor affliction have dimmed Tommy Womack's formidable talents as singer-songwriter -- quite the opposite, in fact. Mr. Womack's acuity of perception and inexhaustible good humour are in full effect in Namaste, his latest album. Fans of "Alpha Male & The Canine Mystery Blood" (that'd be all of us, I believe) should head over to the Digital Content Overlord of their choosing, to pick it up and give it a spin. 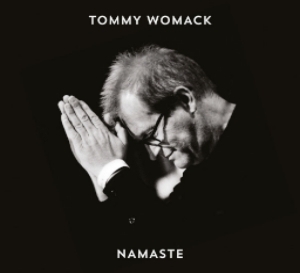 Or, if you're the cautious, streaming sort, listen to "The End of the Line"; "It's Been All Over Before"; "God, Pt. 3"; and "When Country Singers Were Ugly" and let the music carry you into a better Friday.
Posted by Whisky Prajer at 8:05 am No comments:
Email ThisBlogThis!Share to TwitterShare to FacebookShare to Pinterest

Sitting In The Barber's Chair, Gazing Wistfully Across The Cultural/Ethnic Divide 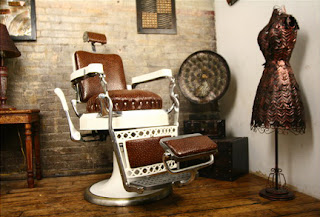 "Oh, yeah," says the gal cutting my hair, "my parents are the original Wops."

Me: (Reminding myself that it's okay for them to say this stuff): Is that right?

"W.O.P. -- 'With Out Papers.' Both of 'em. Came over in the early '70s. Trudeau didn't give 'em a second glance. Trudeau senior, of course. Couldn't do that, today, I'll tell you. Left the old country so they could work here 'til they died."

They've passed on, then?

"No! That's what I'm saying! I'm always, like, 'Mom, Dad -- take a vacation already. Go see the family. When you're dead it's too late.' And they're like, 'Well somebody's gotta pay for the house.' Please. They've covered it three times already."

Sure, but what parent wants to take advice from their kid?

"I know, right? Like this paste I'm putting in your hair -- I'm forever telling the Guidos, 'Enough with the pomade, use this already!' You think they listen? Gotta stick with the pomade. 'My father's father used this stuff.' Honestly."

Now I'm wondering a) how did this girl, born and raised in Scarborough, Ontario, pick up a Jersey accent? and b) how I can parlay this delightful style of repartee to fit the Mennonite scene?

"Na, oh ba yo! The Mennos I come from -- but don't call them that to their faces, seriously, don't -- it's always, 'Pegs or buttons? Which is more prideful?' And never mind the zippers! Grülijch sagt, but what a bunch of schlengls and bengls! Erm, but just be careful you don't say that in front of them, of course."


Doesn't translate so well, alas.
Posted by Whisky Prajer at 10:13 am No comments:
Email ThisBlogThis!Share to TwitterShare to FacebookShare to Pinterest

The Wall Street Journal puzzles over the global ubiquity of Metal -- while the Observer wonders, can the death of Metal be far behind?

I've been puzzling a bit over the personal appeal. After the last concert, I mentioned to my wife what an improbable love-fest the Metal scene had become -- all these people togged out in black, festooned with visceral ephemera and declarations of allegiance to Baphomet & Co., pierced-beyond-the-nines . . .

. . . and giving each other long, affirmational hugs in the circle-pit.


Recollections of the Satanic Panic in the '80s almost have a nostalgic tang to them. Almost.

"So what do you get out of the scene?" she asked.

Not hugs, that's for damn sure. Approaching the stage in my finest Rockports, Dockers and Polo shirt, I boldly announced to one and all that I was the scariest person circling the circle-pit.

If not hugs, then what? I had trouble answering the question. Truth be told, I hadn't really come for the one certifiably metal act (Lamb of God, though I like them well enough). But I do listen to metal, usually via headphones while doing the more onerous housework (bathrooms -- if you want to get those toilets scrubbed properly better cue up Meshuggah).

A great part of the appeal lies in being the only male in the household. All those years of child-rearing, to a seemingly endless soundtrack of Wiggles, Andrew Lloyd Webber, High School Musical, Mama Mia! Glee -- I had to stake out a musical genre before my nuts withered and fell off entirely.

Midlife sillies play a role, as well. In my early-40s I couldn't listen to more than a few minutes of Cookie Monster vocals. But the older I got, the harder my taste in music became.

Still, there's limits to the noise I'll subject myself to. Sunn O)))'s drone metal, or Wolves In The Throne Room -- if that's your thing, you're welcome to it.

And Metal's appeal to women has advanced enormously. In the 80s and early 90s, metal was all dudes. The latest audience I was in was pretty close to a 50-50 gender split.

I think a powerful show with undeniable technical virtuosity is a draw. More than that, I suspect the pop scene's conflation of sexual behavior with political agency and personal identity has more or less driven audiences to a scene where none of that applies.

Still puzzlin' -- WP
Posted by Whisky Prajer at 9:53 am No comments:
Email ThisBlogThis!Share to TwitterShare to FacebookShare to Pinterest

Fifty, And The Aspirational Physique 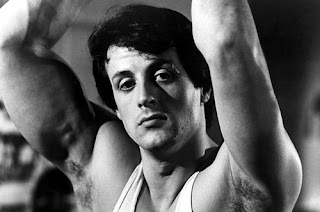 Various other muscular types soon presented themselves -- Ah-nuld being the most obvious of the bunch. But a bod that was clearly helped by pharmaceuticals was easily dismissed -- non-aspirational. We couldn't get the gear, so why bother trying?

Putzing in the gym for 30-plus years and reaching the half-century mark, a fella intuits pretty quickly just how dependent on primo product today's Hollywood hams are. Sure, they do the work -- and most of the truly heavy lifting is on the end of a fork, enduring a micro-managed diet for the better part of a year. But viewers still get the occasional glimpse behind the curtain. There's "incredible shape for a 32-year-old," Hugh Jackman (playing Wolverine) . . . 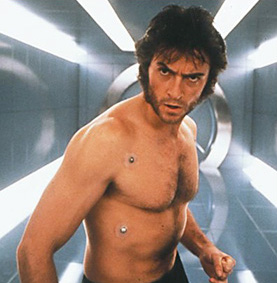 . . . and then there's "no 45-year-old gets veins like that from a magazine routine and a month of chicken salads" Hugh Jackman:


Jackman, being only a year or two younger than my beer-swilling pals and I, ought to be an aspirational figure, but common sense prevails in these matters. No, we mutually concluded -- the age of the aspirational physique had passed.

Now here was someone ten years older, with guns that looked . . . attainable. We were still on the hook.

This week, the 61-year-old Mr. Simmons "damaged the webz," as the kids say, with some workout photos. To wit: 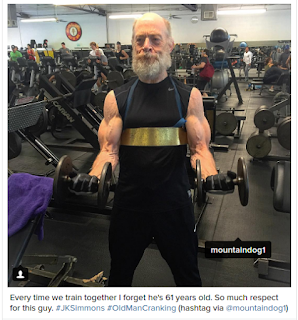 Wings night is back on, fellas -- thank you, sir!

This piece -- Building a Bigger Action Hero by Logan Hill -- outlines what is required from today's action stars. Manu Bennett's tragi-comic story near the end is particularly amusing.

And, finally, here's a recent shot of Arnold Schwarzenegger and Lou Ferrigno meeting up in the gym, some 40 years after Pumping Iron made them famous (a caution against hair-dye and sensible footware).


Posted by Whisky Prajer at 7:12 am 5 comments:
Email ThisBlogThis!Share to TwitterShare to FacebookShare to Pinterest

Which Star Trek Universe Shall We Explore Next?

Which one are "we," the fans, permitted access to?

Katherine Trendacosta writes, "Would it be that bad if the new Star Trek TV series was set in the reboot universe?"

This question never occurred to me, because the possibility the TV show might be set in a non-reboot universe never occurred to me. We've got a familiar-yet-strange tableaux on which to write alternate histories, a buffed-up aesthetic, and one or two buffed-up stars of the silver screen keen to participate in the home-screen fun, including (I'm sure) Simon Pegg. Why wouldn't the series take place in reboot-land?

Shutting down production on a crowdfunded fanfic movie; locking down the rights to Klingonese ... by now it's obvious this particular SF franchise is even more fraught to navigate than the one that formerly belonged to Lucas. We shall have to see how this all shakes down.
Posted by Whisky Prajer at 3:17 pm 3 comments:
Email ThisBlogThis!Share to TwitterShare to FacebookShare to Pinterest
Newer Posts Older Posts Home
Subscribe to: Posts (Atom)