Between the heat and the ramped-up family schedule ("What the ... those adolescents are home all the time!") and various off-line projects, I am not getting to the nitty-gritty of responsible blogging. My apologies. I'm hoping I'll have something ready for consumption by August 6. In the meantime, I hope you are having a lovely summer. If you need help in that department, get yourself a copy of Slaid Cleaves' live album, an extravaganza of raucous sorrow-letting (and value!).
Posted by Whisky Prajer at 6:25 pm No comments:
Email ThisBlogThis!Share to TwitterShare to FacebookShare to Pinterest

The randomizer on That Infernal Device kicked up an unexpected result the other day: “Hotel California” by The Eagles. Really, Infernal Device? 30,000 songs and you still pick the most publically overplayed one of the bunch?

Not that I mind, really. The only radio I listen to is CBC, so when's the last time I've been subjected to the Hotel California? I'd say we haven't had that spirit here since 1999.

Hotel is tidily constructed, with some grimly evocative lyrics and a couple of controlled, properly-lauded guitar solos. It also brings back memories, chiefly of evangelists who, disturbed by what they heard the kids singing along to, took a good hard look at the lyrics and album art and concluded: it's about the Church of Satan, children!

Even in my pious youth that possibility never struck me as something worth worrying about. First of all, such high-falutin' subterfuge seemed unlikely. Secondly, even if it were the case, the generally despairing tone of the song was anything but an endorsement. Put the shoe on the other foot: what if the song were actually about Saddleback, or (more aptly) Westboro Baptist? What kid in his right mind would listen to those lyrics and think, “Kewl! That's a church I want to join!”? 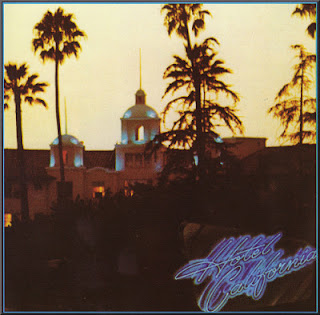 Sigh. Misapplied intelligence: entertaining in hindsight, but grievously mischievous at the time. Here is Snopes on the matter. Better yet, here is Cracked.

Posted by Whisky Prajer at 12:31 pm 2 comments:
Email ThisBlogThis!Share to TwitterShare to FacebookShare to Pinterest

Celebrity fascinates me. I marvel at how a person -- any person -- can manipulate public perception. I can remember a conversation with someone who'd seen Arnold Schwarzenegger and then-wife Maria Shriver being interviewed by Ellen DeGeneres. Something about that interview had persuaded the person I was speaking to that Arnold was a deeply devoted family man. He may not have won any Oscars, but anyone who'd followed the Austrian Oak since Pumping Iron knew the man was a consummate actor, but also an unlikely role model for anything so temperate and onerous as marital fidelity and parental self-control.

Most celebrities only have to be "on" for a few minutes of any given day, which is what makes following the paparazzi so beguiling. These are the guys who do anything they can to peek behind the curtain and pass along the news. We who consider ourselves "savvy" are sure the reality is not what we see. But where, exactly, lie the discrepancies?

The celebrities that blur that line the most are the ones who succeed best. Some do it by keeping the definitions clean: Lady Gaga, Charlie Sheen. But others are somewhat more sophisticated -- adept -- at the art: Alec Baldwin, say.

Here are Lee Siegel's thoughts on the sharpest of the Baldwin Boys -- and some astute observations on the nature of American celebrity in general.
Posted by Whisky Prajer at 9:46 pm 1 comment:
Email ThisBlogThis!Share to TwitterShare to FacebookShare to Pinterest

How Should A Person Be? by Sheila Heti

A gentle word of warning: things get a bit explicit in this post. 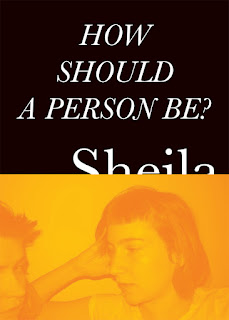 Just over a year ago I noticed all the super-cool kids at the back of the class seemed smitten with Sheila Heti's How Should A Person Be? This was the first I'd heard of the Toronto author and her second(!) novel, published by Anansi, perhaps the most prestigious of Canada's small presses. Slated for US publication, the internet hep-cats were expressing irony-free enthusiasm for the book, signaling How as the next "it" novel — which has indeed come to pass — so I gambled a stamp and placed my order.

I dislike the book, but then I was hampered by several significant disadvantages going into it. If teh interwebz is any indication, the book's ideal audience is: A) female B) young C) not yet burdened with/enlightened by children. Dudes pushing 50 need not apply — especially if they are the fathers of adolescent daughters.

A tip of the hat, though, for all those widely acknowledged techniques that bring novelty to the novel — the first-person narrator named “Sheila Heti,” who interacts with and records the conversations of other similarly identifiable “real” people, the (Tina) fey tone of voice that either belies or connotes a formidable intelligence, the calculated use of extreme candor, and so on. I can see why these strategies have made this book the toast of the Global Village. Some of them even worked with me.

But, man oh man, did I ever hate the sex.

This is a problem, because this book meditates a great deal on sex. Just a few paragraphs into the first chapter, “Sheila Heti” announces this is the era “of some really great blow-job artists.” She's too canny to declare herself one of them, but she's also canny enough to let the reader know just how much she is willing to suffer for her art — quite a bit, apparently: “I just breathe through my nose and try not to throw up . . . I did vomit a little the other day, but I kept right on sucking.”

She soon takes up with a coked-up piece of work named Israel. A “9½ Weeks” scenario takes place, with some distinctions: Israel comports himself as a low-rent John Gray, under whose ministrations “Sheila Heti,” the would-be feminist playwright, is happy to play Elizabeth McGraw. She recognizes the absurdities of this and even comments on a few of them, but the relationship doesn't conclude until she willingly trumps his degradations, finally provoking his disgust. For readers wary of Sadeian extremes, if the passage quoted in the previous paragraph hasn't already removed the book from your “maybe” list, the scene in question won't either.

Taking these scenes at face value, it could be argued that when it comes to no-holds-barred sexual congress, a person is likely to discover “how to be” only after that person has gone too far and discovered how not to be. Not a jolly conclusion, to be sure, but also not a “bad” lesson to learn, either — especially for readers who haven't yet reached that point of no return.

There are other filters through which to view these scenes, but they don't make the sex any more joyful or ecstatic. Which might also account for the book's enormous appeal: sexual congress might not be an especially joyful or ecstatic business these days, particularly for young women. Heti may be the natural response to Houllebecq.

Jessa Crispin (aka, “Bookslut”), one of Heti's earliest champions, was recently gob-smacked by an unexpected addition to the “self-help” shelf: Why Love Hurts by Eva Illouz. Illouz dares to propose that when it comes to expectations of love, an individual's feelings of unhappiness or alienation within a given society might not be within the individual's purview of change — that those “negative” feelings might not, in other words, be that person's fault: it might be society that is to blame. Shortly after taking a survey of “Game” blogs (essentially platforms where “Israels” boast at length of their “Sheila” conquests), Mary Scriver came to a similar conclusion: perhaps the West has become a feral society.

These observations raise (or ought to) burning questions for everyone. “How should a person be?” is just one; “How should a society be?” is another. If that's the title of Ms. Heti's next novel, I will hand over the plastic. If it proves to be a further account of even-sadder-sex, however, I will forgo the pleasure of reading it.

Links: there are many worthwhile links to explore. I collected some here. Sheila Heti's website has plenty more. And of course there is always Google.
Posted by Whisky Prajer at 10:36 am 2 comments:
Email ThisBlogThis!Share to TwitterShare to FacebookShare to Pinterest

I'm working on a review of Sheila Heti's How Should A Person Be? So much has already been said about the book that my thoughts probably ought to be trimmed to a tweet. That ain't the way it will shake down, however. But if you check these links you'll see some of what I'm working with/against.
Posted by Whisky Prajer at 4:29 pm No comments:
Email ThisBlogThis!Share to TwitterShare to FacebookShare to Pinterest

The miasma of squandered fossil fuel clings to this town like a cheap suit. Happy Canada Day.

And since I'm in such a cheery mood — yo, cyclists! Remember me? That's right: I'm the doofus who gives every vehicle that passes me a hearty "Thank you!" wave. I may look like a goof, but the rest of you look like assholes.
Posted by Whisky Prajer at 11:11 am No comments:
Email ThisBlogThis!Share to TwitterShare to FacebookShare to Pinterest
Newer Posts Older Posts Home
Subscribe to: Posts (Atom)