Pinterest-prompted flashback du jour — a poster for Haywire, a DC comic for “mature readers” circa 1988. 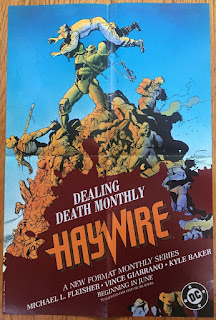 Kyle Baker, whose work I adore, inked the first three issues before splitting the scene to team up again with Andrew Helfer for Justice Inc. — a miniseries that better engaged his mischievous sensibilities.

Haywire was not about subtle mischief — not by a long-shot. Right out of the gate it was all about the unsubtle body count.
DC’s abrupt shift in publishing standards was prompted by the launch of Wolverine’s new monthly series at Marvel, the premier issue of which boasted the largest body count in comic book history to that point. Needless to say, Wolverine was a huge hit.
DC’s answer was a hastily-scripted and just-as-hastily-rendered affair that began with carnage and quickly progressed to pulpy S&M tropes.
DC wasn’t just competing with the regular Marvel line but with Epic Comics — the Marvel imprint producing decidedly non-CCA material like Elektra: Assassin. Haywire was launched as primo “mature reader” content, but one year later there was no longer any denying the bald facts — the only readers still buying the title were burgeoning fetishists, or misguided OCD completists (I am sure there’s little doubt which category I fall into).

In fairness to myself, I was goaded on by a friend who claimed to love the books. At the time I was a salaried writer with income at my disposal, he a university student with considerably less. He borrowed the new issues as soon as I bought them. I should have known something was amiss when he returned them just as promptly.

Also, this was an era when comics were accruing value at an unheard of rate. That initial issue of Wolverine, for instance — just one year later I traded it for the entire first run of Frank Miller’s Daredevil. Who knew what outrageous values these books would command in a few years' time? (Answer: once inflation is accounted for, fractions-of-pennies-on-the-dollar.)

Anyway, no need to go any further with this — the series is lamentable, full stop.

I’m not even sure why I mention it at all. Confession is good for the soul, I suppose.
Posted by Whisky Prajer at 5:35 pm No comments:
Email ThisBlogThis!Share to TwitterShare to FacebookShare to Pinterest

No post last week, not even so much as a promissory notice ... tsk. I shall endeavor to do better this week. Thank you for checking in.
Posted by Whisky Prajer at 8:50 am 2 comments:
Email ThisBlogThis!Share to TwitterShare to FacebookShare to Pinterest

A weekend of the sads for me — the first Mother's Day of my life I have been under no obligation to call me mum.

Also this was the weekend we finally finished watching The Americans. Initially I thought myself disappointed with the exposition-heavy finale. Worse, I bitterly resented having my emotions twisted into a pretzel by the gratuitous use of U2.

But the more I brooded over it all the more deeply I understood just how unremittingly bleak the finale was. Days later there is one single scene from that episode, the memory of which is still enough to move me to tears. I can't say more without spoiling it, so I'll reserve further commentary for the end of this post.


“When I was much younger, one of the few prayers/mantras that remained interesting to me was asking God to make my life a work of art. Maybe it was just my way of wondering out loud, If I could write a good song, why not also try to write a good life?”

Linford Detweiler of Over The Rhine movingly discusses his mother-in-law's recent passing, over here. I read it aloud to my wife last night. After I'd hankied away my personal watershed, she asked, “So what are we doing that weekend?”

“Arg . . . commitments, babe. And they don't include Ohio.” Alas. Looks like it should be an incredible — even necessary — gathering.

One of the cruelest pranks I ever played on my mother was to (mis)inform my friends she used the water she boiled weiners in for soup stock. One friend passed this tidbit along to her father. “Those poor kids!” was his response. I was then in my 20s, and realized my mischief had gone too far, but I did not inform my mother of it until many years later. She gave me a pained look, then burst into laughter.

Turns out “Is weiner-water soup stock?” is an actual question. I take full responsibility.

“Why not also try to write a good life?”

Alright, on to The Americans — here come the spoilers.
Throughout the episode, and particularly during the agonizingly long, final face off with Stan Beeman, I kept thinking, It's not fair — you don't get to get away with this.

On a superficial level Philip and Elizabeth do “get away with it.” But in every way that counts, there is a terrible toll to pay, and the people who made this series did an outstanding job of getting the viewer to mull over the ramifications of everything that's gone on.

The “Jennings” do make it back to Moscow, but there is no doubt for the viewer that these people are little more than used up husks of humanity. And of all the many betrayals they have committed over the years, the worst were to their children who are now utterly without hope of recovering anything meaningful from their parents.

It's a kick in the gut — no parent can watch this without conjuring moments they've wounded their own children. But we're not the Jennings, right? For most of us there is a wider and deeper buffer of grace than Philip or Elizabeth could ever appeal to.

So be good to each other — try to write a good life.
Posted by Whisky Prajer at 1:46 pm No comments:
Email ThisBlogThis!Share to TwitterShare to FacebookShare to Pinterest

A Star Wars retcon I can get behind.


Manages to add value to '77 and the notorious prequels, does it not?

"Somehow Ewan McGregor ended up the unsung hero of the franchise," laments my friend Scott. "It's criminal when he truly was the soul of those prequels." Indeed, this exercise has me re-thinking some of my initial reactions to the epic retcons that have, more often than not, made SWU continuity a laughable bollix. With some diligence and empathy, a retcon of the prequels could possibly elevate them above the initial trio of films. Make it so, Mr. Spock!

Post-script: Topher Grace famously edited the three prequels into an 85-minute film that rocked harder than did their initial six hours and fifty-five minutes. Maybe it looks like this?
Posted by dpreimer at 10:33 am No comments:
Email ThisBlogThis!Share to TwitterShare to FacebookShare to Pinterest

Whither the TRUE “City of God”?

If you are the sort to enjoy eavesdropping on a couple of continental blowhards twirling their non-existent mustaches and pondering, “Whither Catholicism?” knock yerself out.

The only reason this gasbaggery is of any public interest is one of the voices belongs to Michel Houllebecq, France's reigning “literary bad boy.”
It's curious how “literary bad boys” frequently seem to harbour a nostalgia for the days when the Mother Church of Rome was the acknowledged common organizing principle.* We have no shortage of “literary it girls” (sic) writing novels and the like, but I've yet to encounter any who express wistfulness for pre-Vatican II Rome. I'm sure they have their reasons.

Maybe it's a Parisian thing. Morley Callaghan noted, with some pique, how the literary bad boys of his day developed a sudden fondness for things Catholic while enjoying their chosen exile in Paris. Cradle Catholics like Callaghan and James Joyce watched with bemusement as Hemingway and Fitzgerald and a wide array of also-rans converted and became loud (usually temporary) advocates of the blessed HRCC. Again, this wasn't a passion that seemed to inflame any of the women in their orbit — cause for pious vexation, I expect, if not marriage annulment.

Anyway, I don't think much of this sort of nostalgia (can you tell?). Besides, people who are truly in the know about these matters are in agreement that there was no finer City of God than the Molochna Colony, under the aegis of Catherine The Great.

*It's also curious how these two in particular can't seem to muster up much curiosity for the Russian Orthodox Church, Dostoevsky's religion from cradle to grave, which remains a powerful organizing principle in that country to this day.
Posted by Whisky Prajer at 2:31 pm No comments:
Email ThisBlogThis!Share to TwitterShare to FacebookShare to Pinterest
Newer Posts Older Posts Home
Subscribe to: Posts (Atom) 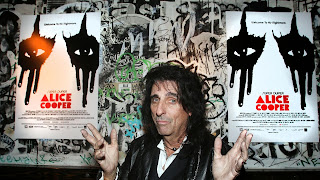