The Monks' ‘Bad Habits’: Joining In The Tribute

For this 16-year-old Winnipeger, circa 1980, life was chiefly what you heard and saw on the bus. And if you spent five days a week riding from west end suburbia to the Mennonite school just inside the east end of the city, you saw and heard a great deal.

Winnipeg had Punks, for starters. No more than two-dozen of 'em, but they all rode the bus. I admired and envied their aesthetic. These days every five-year-old boy gets a mohawk and an earring for his first day of kindergarten, but back in '80 those choices invited censure and even violence. I never copped anything bolder than a mullet (as cut by my usually game mother, in the family kitchen), or wore anything more remarkable than a skinny tie, or Gorilla work boots, or a few band pins (most of them Christian) on my reasonably faded jean jacket.

The Winnipeg punks took pride in their 'dos. They wore outlandish gear — army surplus, the better to endure the cruel winters. And they took pains to scrawl or paint “The Monks” on their jackets. 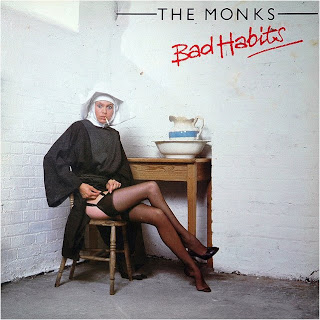 Ah, The Monks: far and away the most accessible punk band on the Canadian Prairies. You could find Bad Habits — their one and only album* — in the sale bins of every K-Mart and Woolco store in the city. A mere two dollars got you immediate entrance into this dangerous-looking scene.

I'd heard punk described as “noise” and didn't yet have a threshold for anything without a reliable foundation of at least three chords. And then there was this business of lyrics. Just looking at the album cover, with its startled nun caught in the act of removing her habit for a night on the town, and the song titles (“Drugs In My Pocket”? “No Shame”?! “I Ain't Getting Any”?!?!) convinced me this was music that a) I'd have a difficult time squaring with my conscience, and b) would never fly in my parents house, so I left well enough alone.

A year or two later I was riding in a tour bus filled with band and choir classmates. We were coming home from Kenora, Ontario, and the boys from the volleyball team were holding down the back seats and playing Bad Habits on the team boom-box. I seethed — ostensibly for pious reasons, but truthfully because the music was inescapably fun. And these guffawing lunks had got to it first.

Thirty years after that, I'm told that The Monks were a uniquely Canadian phenom. John Ford and Richard Hudson, the Monks' creative duo, originally fronted The Strawbs, a soppy-stern prog-rock band that had something of a following in Britain. Ford and Hudson were closely watching the punk scene, and, on a lark, took to the studio to join in on the fun. Bad Habits was the result, and “Nice Legs, Shame About Her Face” rocketed to the top of the pops. At some point, the penny dropped that these jokers weren't even remotely punk, certainly not in origin, and they experienced that uniquely British backlash that occurs when the public thinks they've been had by a pop band.

None of this was an issue in Canada, where the album was being sold by the skid-load. Was the colony getting punk'd by a couple of wise-ass Limeys? Listening to the album now, I very much doubt it.

Musically, Bad Habits is a far cry from punk: the band members have clear mastery of their instruments, and the wordplay, regardless of all the “Oys”, is much too agile. “Nice Legs,” which almost sounds like a lark recorded in someone's garage, giddyups with a mid-song key change, and lyrically fits the attitude that informs the rest of the songs, with the incorrigible yob of a narrator receiving his comeuppance at song's conclusion.

In fact, the lyrics that so worried me actually have an Everyman sort of progression to them. Certainly the various narrators are keen on indulgence at every front. But theirs is a rigidly moral universe: the twit lamenting “I Ain't Getting Any” is clearly too daft to realize just what a revolting figure he cuts, and “Drugs In My Pocket” is anything but an endorsement of the lifestyle. You almost get the impression the nun on the cover might find her way back to the confessional.

Then there's “Johnny B. Rotten,” a dual-play on Chuck Berry's hit and the then-infamous singer of the Sex Pistols. It's the album opener, and strikes a super-fine balance between affectionate homage and taking the piss, while sustaining an infectiously energetic dance-ability. And as with all the album's songs, its turns of phrase demonstrate a subtlety of intelligence approaching that of two other über-clever musicians (ahem): Donald Fagen and Walter Becker of Steely Dan.

Of course, “Out Of Work Musician” might not finally tap the tragicomic gravitas that “What A Shame About Me” draws upon. But that was never the goal. The goal, I think, was to have as much fun as two smart, accomplished musicians could have in a particular given moment. They achieved that with exceptional flare, and that's what won over the ears of Canadians — including Yours Truly, once he got over himself.

Thomas D'Arcy is the fellow responsible for this reminiscence.** This summer the Ontario-based singer and his cohort threw together a tribute album that attempts to preserve all the elements that originally won them over — which is everything, of course — while riffing off potential blank spaces. The end result is reverential, to say the least. And yet there is an unmistakable personal grit that sometimes polishes what was rough, and at other times texturizes what was perhaps a tad too smooth and shiny to begin with.*** Regardless of what you think of it, the price is way right, and well worth the listen — especially if this is your introduction to D'Arcy — or The Monks, Canada's favorite British “punk” band. 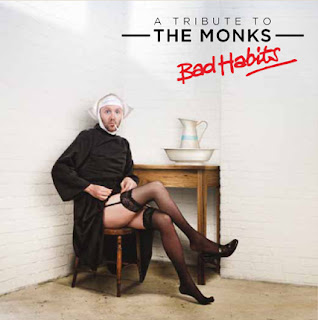 *The Monks had a follow-up album — In Suspension — that they released two years later, exclusively to Canada. It looked to me like it, too, went straight to the sale bins. Also, it's terrible. I'm serious — terrible.

**D'Arcy's history of the band and this album is succinct, and mostly spot-on. But “big in Canada, HUGE in Ontario”? Dude: if a bus-full of prairie Mennonite farm-boys, who didn't know Johnny Rotten from Johnny Walker, could bellow along to “Nice Legs” in the early 80s, I think it's fair to say Ontario's larger claim is to its predominant population base.

***D'Arcy's overall mix itself is a fabulous improvement on my old '93 CD, which is painfully bright on the ears.

Here is a recent interview with Monk John Ford, re: the tribute album, and The Monks' unique legacy in Canada.

Posted by Whisky Prajer at 6:26 am No comments:
Email ThisBlogThis!Share to TwitterShare to FacebookShare to Pinterest

All The Angry Mennonites, Part 1

During a recent visit, my father surprised me with a question: “Do you read any of the 'Angry Mennonites'?”

I asked him if this was a formally defined group, like Gertrude Stein's “Lost Generation” or Lauren Bacall's “Rat Pack,” and he admitted the term was amorphous, but commonly used among his peers. Who were the usual suspects, I wondered. He came up with the expected list: Miriam Toews, Patrick Friesen, Di Brandt, Sandra Birdsell — basically the only Mennonites receiving what passes for prestige treatment in Canadian publishing. I said they could be difficult to avoid, but I somehow managed.

A bit of a dodge, that. The truth is I've read enough of all those guys to know I have no interest in the larger monologue. If asked about the moral/immoral legacy of the Mennonites and the psychic burdens their theology and pieties place on the individual, I can fill in the blanks pretty quickly all by myself. In fact, I have filled in the blanks.

Last winter as I prepared to attend my grandmother's funeral, my wife pressed a notebook to me and said, “You should start writing. Now.”

So I reminisced as I flew to the prairies. It was pleasant, for the most part, but there was no escaping the single largest fact in all this: I had physically removed myself from the environment I grew up in, putting considerable geographical and spiritual and “Lifestyle” distance between me and the clan that raised me. You want grievances? Scribner doesn't make a large enough notebook.

Which probably cuts to the heart of my father's concern. His question was likely a dodge, to begin with. The question he probably meant to ask was, “You're not an angry Mennonite — are you, son?”

Well . . . yeah, Pop: I'm afraid I am.
Posted by Whisky Prajer at 11:10 am No comments:
Email ThisBlogThis!Share to TwitterShare to FacebookShare to Pinterest

A Wrinkle In Time, The Graphic Novel

As Disney was leading up to the release of its television mini-series of A Wrinkle In Time, an interviewer asked Madeleine L'Engle if the show met her expectations. "Oh yes," she said. "I expected it to be bad, and it is."

ON THE OTHER HAND, Hope Larson's graphic adaptation of the deeply beloved novel, due October 5, looks most promising. 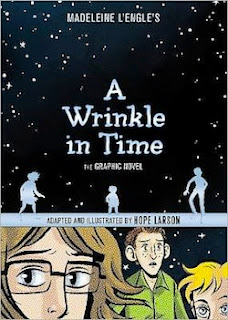 Posted by Whisky Prajer at 2:41 pm No comments:
Email ThisBlogThis!Share to TwitterShare to FacebookShare to Pinterest

I can't recall which cheeseburger joint was playing it, but when I first heard John Rich's “Mack Truck” (YouTube) I thought, “Oh no: Nashville finally discovered Hip-Hop.” Then I thought, “Good Lord, that sounds as bad as 80s-era Christian Rock.” Which got me thinking of Hank Hill's jeremiad: “Can't you see you're not making Christianity better, you're just making rock 'n' roll worse!” Nashville has been taking the corner-kickers to rock 'n' roll for decades now, so it's finally moved on to Hip-Hop. And yes, Nashville is making it much, much worse.

It was not always thus, and the Country Funk 1969-1975 collection is a delightful reminder of more fecund cross-pollination. It seems the young country singers of the Age of Aquarius heard a sensibility they could strongly identify with in the funk records of their day, and thought, “I could do that!” It's a street-sensibility (“L.A. Memphis Tyler Texas” “Hawg Frawg”), a Gospel-sensibility (Link Wray's killer “Fire & Brimstone”), a “Leave me alone, I'm enjoying the Highway to Hell just fine” sensibility (“Stud Spider”). Add a light touch of twang, and boy-howdy if it doesn't all work (well ... with the possible exception of Dennis the Fox's “Piledriver,” which sounds a bit forced).

The download places offer this collection as “album only” but I wouldn't let that scare you off: I can't think of any other way I'd play these songs. Highly recommended for the last few car-washes of the Fall. 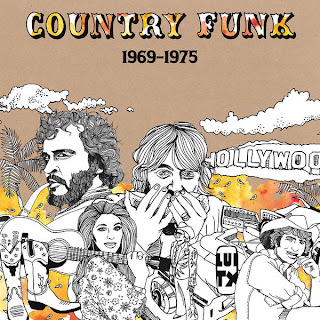