The Soundtrack for the Post-Farewell Ride Home Alone

I asked DV for his soundtrack for the ride home alone, after dropping off his daughter. He obliged, and here it is. It is, typically enough, a class act through and through. I only hope I can muster up such composure and aesthetic heights when it's my turn to drop one or the other daughter off at her adult destination.

I do, however, have a soundtrack I play after I've delivered my wife to the airport, for yet another one of her international jaunts. My feelings about those trips are intensely conflicted. On the one hand, she (and by extension, the three of us at home) are incredibly privileged to have her see and contribute to such worthy work in such needy places. On the other hand, it takes a hell of a toll. The summer before last, she visited a site in post-Tsunami India. She came back on my 40th birthday with some incredibly moving stories, but just this spring she let me read her journal from that visit. One year later, I'm reading for the first time her account of a "Grieving Circle", held by a seaside community. Terrible, beyond heart-breaking stories come out, then one young man staggers in from outside. He's drunk and he's raving. Someone translates his ravings for my wife. His young wife was giving birth to their first child, a daughter. Both were swept away.

This story has silently sat in the pages of my wife's journal for the last year, like a tiny, horrible bomb. Who knows what else she's seen? And yet, of the two of us, she is undeniably the most spirited, the most optimistic and the most uplifting. She is my hero.

Every time I drop her off at the airport, I have to stave off my "Dear God, what if something finally happens to her on this trip?" thoughts. No easy task, and the ride home takes exactly 55 minutes. For the last two-and-a-half years, I have used that 55 minute ride to play Contraband by Velvet Revolver at a volume that drowns out the road noise, and the noise in my head.

The album is horrid. It is self-pitying, it is frightened, and it is frightening. Whenever I play it I picture a room full of Richard Bransons cooing into the cauliflower ears of Scott Weiland and Slash and all the other GnR survivors, saying things like: "You poor, coddled, drug-ruined pussy-hounds. Life is so unfair. Now just sing into the mic and tell us how you really feel." The end result is thunderously loud and just self-indulgent enough to distract me from my worst fears -- at least for that crucial hour before I get to face my children again, and muster up what's really there, to be a man and do what has to be done before I crawl into a bed that's too big for me.

Every time I'm fallin' down
All alone I fall to pieces -- meh. It ain't Shakespeare, but it sure does the job. 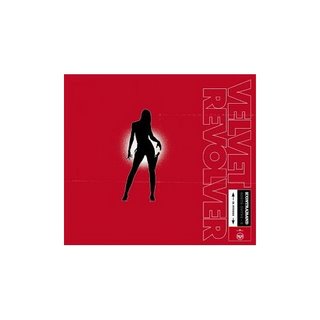 Posted by Whisky Prajer at 2:19 pm
Email ThisBlogThis!Share to TwitterShare to FacebookShare to Pinterest
Labels: Music

That was a tremendous piece of writing you just posted.

WP - Seems you have a good way to put things in perspective.

I chuckled all the way through that, thx.

And I know what you mean about obessing about the safety of loved ones when they're "not in the nest" as we put it at my house.

Thanks, all. "Not in the nest" - that's the metaphor, alright.

A heartbreak of major proportions. Again, I marvel at the strength and reseliance of your wife's inner core. An Amazon in the land of human frailities.

A Q.: When you go pick her up from one of her long trips, what's playing on the return to the nest?

Hm - good question. If it's close to Christmas, the "Coming Home Soundtrack" is Vince Guaraldi's Charlie Brown Christmas. Most of the time, though, I'm playing and humming along to something from the Steely Dan shelf, while she catches up with the girls.