Movies and Mennonites make for a conflicted bit of business, what with the former presenting so many worldly temptations to the latter. In the prairie village of my youth, some kids were allowed to see movies in the local cinema, others were not. Just about everyone, though, saw movies in school — twice a year, and always a Disney family flick.

Most of these were critter based adventures that required at least one romp through a well-stocked grocery store (followed by the inevitable “He doesn't belong here” speech from one of the parents). A few were more remarkable — Bambi and Old Yeller come to mind. But I'm guessing the movie that left the deepest imprint in most of us sprats was Toby Tyler. 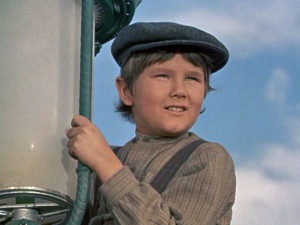 I haven't seen it in over 30 years, but I have a clear recollection of how I thought of it as a kid. Toby is an orphan, cared for by a soppy stern uncle and gormless aunt. The uncle wants him to stay home and tend to the pigs, but Toby just wants a break for once because the circus is in town. He watches the parade, gets caught up in the spectacle, the pigs run amok, and his uncle sends Toby to bed without any supper. Toby does the logical thing and runs away to join the circus.

What follows is a masculine version of Pollyanna. Toby faces adversity with a steadfast innocence, and eventually insinuates himself right to the heart of the circus. By movie's end, he is performing alongside the circus darling Mademoiselle Jeanette in front of a full house that includes his now penitent uncle and aunt. Even his beloved chimp Mr. Tibbs, felled by a hunter's bullet, is resurrected and restored to Toby's new, larger world.

Like so many of the Disney offerings of the day, Toby Tyler is a three-handkerchief weepy, resonant with messages a child intuitively takes to heart. Chief among these is its portrait of adults: when they don't begrudge a child's presence, they're quick to manipulate the kid to their own advantage. Compassion comes slowly, if at all.

I sometimes wonder if everyone from my generation didn't run away from that village to join the circus. We bartered away various pieces of our innocence, or put ourselves in situations where it was torn away from us. Some of us came back — enough of us to keep the village growing — but I doubt any of us received applause for it. Citizens of small towns, contrary to the Disney stereotype, have more in common with Toby's hardscrabble circus-mates than they do with the yokels who applaud a boy performing stunts on a horse. In my experience, now as then, people from small towns are more cynical than most city residents. If that's not a quality you can live with and deal out in kind, you move to and stay in the city.

I'm not sure why I'm musing in this direction. My little family is navigating a bit of a rough patch, so maybe I'm just pining for that childhood sense of security that allowed a kid to relate to the ups and downs of a circus orphan, confident finally in one's ability to persevere and see some good come of it. Certainly I hope that's the point of view we're encouraging our children to adopt.

But there is also a characteristic of small towns that I'd like to see changed. Kids who like to play the “What If?” game quickly learn that a small town isn't the place for it. That's not necessarily a bad thing: there are some “What Ifs?” that are extremely imprudent to indulge. Having said all this, it still astonishes me to see some of the businesses people hope to set up in a small town. It's one thing to get a convenience store up and running, and quite another to try the same trick with a balloon bouquet outfit. So what if the balloon bouquet lady worked out a deal with the convenience store family? Well ... that's a “What If” you'll rarely see entertained in a small town. Rather than fail small, the balloon bouquet lady naturally figures it's better to swing for the bleachers.

Towns have such a tough time keeping their communities economically alive, but that ever-present cynical vibe doesn't make the task any easier.

Anyhow. Scattered thoughts while our family waits for the circus to come to town.
Posted by Whisky Prajer at 1:25 pm
Email ThisBlogThis!Share to TwitterShare to FacebookShare to Pinterest
Labels: Movies

I missed the 70s, but remember all those movies being shown and re-shown on the Disney channel when I was growing up. I think you hit the nail on the head with the description of them. I remember in particular "Gus" did a lot of damage to a grocery store.