Battle of the 80s Bands: I Declare The Winner!

That's a good sentiment to get the e-mails coming, but it doesn't quite capture where I was in the 80s. U2? R.E.M.? I liked 'em both just fine. But I loved, loved, loved Talking Heads.

The closest I ever got to seeing any of these bands perform was in the movies (by the time I was finally in physical proximity to a U2 or R.E.M. concert, they'd lost my interest -- I'd moved on to Lou Reed and T Bone Burnett). In 1982 we had U2 Live at Red Rocks: Under A Blood Red Sky. Having seen the Red Rocks amphitheatre, I was duly impressed by the bonfires on the cliffs. I thought Bono demonstrated a nifty grasp of rock theatrics with his flag-waving, but his little jig with the feathered blonde from the audience struck me as being a bit twee. 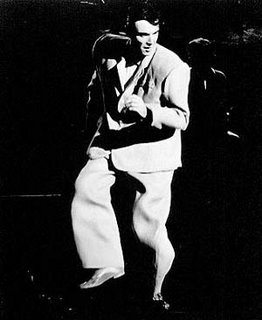 A year later Talking Heads gave us Stop Making Sense. It's just grossly unfair of me to even begin to compare the two performances. One movie caught a glimpse of a very young band on the rise, the other demonstrated a journeyman band's absolute mastery of music and theatrics. A more even-handed compare and contrast would be SMS with U2's Zoo TV. Tina Weymouth reportedly came backstage during a Zoo TV concert and told the Irish rock stars this was what she'd hoped her little band would amount to. She was there, she's entitled to that opinion. I still think U2 comes off looking like bunch of copycats and hucksters. Bono's "sincere" set, when he takes off the shades and sings the obligatory numbers from Joshua Tree, *really* kicks me in the gonads. And lest we somehow misconstrue his "message", he skips backstage and reappears as MacPhisto. Eef -- Stop Making Sense is looking better and better all the time.

These days my CD collections of both U2 and R.E.M. have been shoved to the back of a dusty closet. As for Talking Heads ... it's just not Friday night without at least one or two songs from their still-impressive body of work.
By Whisky Prajer - November 09, 2006
Email ThisBlogThis!Share to TwitterShare to FacebookShare to Pinterest
Labels: Music

'Nuff said. No other band to be talking about but the Heads. Who out doesn't want David Byrne to be the face of your soul when you're bartering with heaven's bouncer, St. Pete, to gain entrance to the Big Club? Where do I sign up to make that official?

That should have been written as Who out there doesn't want..

I certainly saw where you were coming from. And I completely agree.

Totally. And I want him to be wearing that big white suit with the giant shoulder pads, too.

Funny, I was part of a minority that neither loved U2 nor liked them fine. I hated them. And thanks to their popularity I have been listening to them by proxy for the last 20+ years.

So next time you're in public and the sweet strains of Ashley Simpson grace your ear drums, in the words of Nelson Munz just let me say, "Ha, ha!"

Whew, it felt so good to get that anger out of my system...

p.s. No mention of Daniel Band?

I should repeat that I'm at the point where U2's music grates on my ears, too. Not so, R.E.M.

Well, someone's gotta send REM some love -- it'll have to be me -- though, as a huge fan, I totally get why they put people off.

For starters, Michael Stipe's nasal wail is as intriguing to some as it is irritating to others. He also has a weird knack for sounding earnestly heartfelt and maddeningly pretentious at exactly the same time!

Next, there's the band's desire to experiment, which creates as many misses as hits. Every single one of their albums has at least one song I find transcendent, and at least one song that makes me shake my head and ask, 'What were they thinking?'

But, overall, I saw them live in '99, they were absolutely fantastic, and while U2 was phoning it in with 'All That You Can't Leave Behind,' REM released the frustratingly-underrated 'Reveal,' a CD I still enjoy immensely.

Oh, but Stop Making Sense? Greatest concert movie EVER. I saw it outdoors at Nathan Phillips Square one summer. Despite my love for the film, I thought it was an odd choice for a big public screening until I became part of a crowd of young, old, male, female, black, white, straight, gay, everything people dancing in front of City Hall. Pure magic, and U2's got some serious work to do if they plan to catch up to that legacy!

I would choose David Bowie, personally. But, maybe he doesn't qualify as a "band".