The Shootist -- the Duke's final opportunity to sink his teeth into a character piece. Not many people bother with this film, though, and I think it's due to the by-the-numbers conclusion. This could have been a great movie if the final pages had been run through the typewriter a few more times.

Silent Movie -- love it. The 70s deserved Mel Brooks, and he the 70s. Neither of these two phenomena had the legs to stretch into the 80s, and maybe it's just as well for all of us.

All The President's Men -- only saw this once, and that was many, many years ago. I watched it after reading William Goldman's account of the absurdities of its production. I was surprised at just how engaging it was. I was also impressed with Woodward and Bernstein's dogged legwork. I somehow doubt that standard is being applied to print journalists anymore.

Rocky -- it's easy to forget just how good this movie was. All those sequels ... *sigh*. Stallone was so personally attached to this film and its success, that the story became about him. Now every movie he does is about him, while there's less and less of him that is of interest.

Taxi Driver -- the library in my family's church had numerous autobiographies ("testimonials") that portayed New York City as one huge, seething pit. Some of the details in these books were so sickening (and not a little prurient) that when I finally saw this movie, the experience seemed a little ... tame. Still, it adheres the closest to my childhood picture of NYC, in contrast to, say, Woody Allen's movies.
Posted by Whisky Prajer at 6:14 am
Email ThisBlogThis!Share to TwitterShare to FacebookShare to Pinterest

Taxi Driver, Network, and All the President's Men are still strong movies that carry through to this century. I do agree with your point about Stallone and Rocky, especially the biting "Now every movie he does is about him, while there's less and less of him that is of interest." I didn't like it the first time around though, so I definitely wuld not include it as a top ten of any year, especially due to all that it spawned.

Small Change? One of those French films guaranteed to irritate you and not because it's a speck of sand irritatingly forming a pearl. I much prefer this Small Change, also from 1976.

Yeah, the French have nothing on Mr. Waits.

In the summer of 1979 our family moved from the Mennonite village of my childhood to a suburb of Winnipeg. I had just turned 14. The new h... 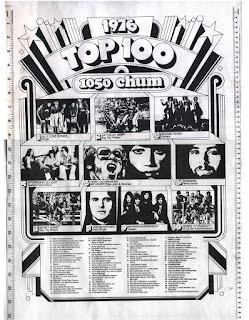