I received an unhappy, but not unexpected, email the other day — Google Play Music is shuttering and giving it up to YouTube Music. 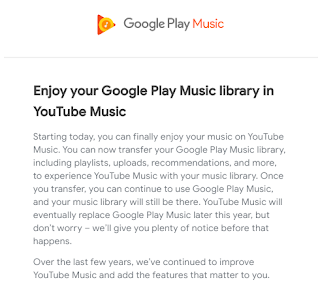 There are features to YTM that recommend it above GPM. YTM’s graphic interface is a sexy beast, where GPM’s has been a stodgy old “meh” from Day 1. Also, YTM has seamless access to YouTube proper, which offers inexhaustible troves of delights. Just one example, if, in my newfound love for Ghost Light, I want to compare and contrast concert performances like their delightful Cervantes double-set to their equally delightful available-on-YouTube ONLY double-set at The Independent, San Francisco it can be done with a simple click or tap — no extra tabs to keep open, no painstaking search engine queries, just pure joy.

But YouTube is a streaming service — full stop. And I am loathe to stream music.

There’s the issue of what streaming nets the performers who provide the content, for starters. But, more selfishly, streaming rarely offers good quality sound. Much of that has to do with the technology on my end — very few phones, tablets or laptops have a DAC that brings out what’s actually available in the sound files being played (old Neil is right). And yes, you can download and install better DACs, but then lag-time becomes an issue.

Google Play Music had two features I took advantage of — downloads and uploading.

With regards to downloads, in the main I prefer to buy CDs directly from the act, but there are occasions where downloads are the only option. GPM’s soundfiles were surprisingly respectable and inexpensive. YTM doesn’t offer downloads, so my next go-to will likely be HDTracks.

As for uploading — I took it for granted, because I rarely streamed my library (it was handy when we were travelling, or visiting family). And yes, I have my digital music library on two separate hard-drives and spread across several portable players. But it was a comfort to think that the hard-to-find out-of-print stuff was secure yet easily accessible in some corner of Google’s massive cloud. And there were albums that I personally remastered and stored there, including the entirety of Citizen: Steely Dan — which sounded great in 1993 but, 27 years later, could stand a serious reengineering.

Google assures me my music lye-berry will be seamlessly transferred to YouTube’s acreage in the Google cloud. We shall see. I have to wonder if YouTube’s algorithm won’t sort through my id tags and decide, “Oh, Citizen: Steely Dan. We have that already. Just bin these files and give him access to ours.” It would be the logical thing to do, but it’d set me out.

Anyhoo, these are admittedly trifles in the current environment of mass discomfort and discombobulation. But sometimes trifles can be welcome diversions, too. So on that note: thanks for reading!
Posted by Whisky Prajer at 10:43 am
Email ThisBlogThis!Share to TwitterShare to FacebookShare to Pinterest

ERGHHH! I have yet to receive this bad news. What to do? Surrender to Spotify (that's what the kiddies are telling me) or go to YouTube. Not happy about this!

I pulled the trigger on "transfer your library to YouTube" and will let you know how that turns out. I'm still cool on streaming, but will give it up to your kids for their experience and wisdom. My experiments with Spotify's recommendation engine have yielded better results than similar experiments with YouTube or even Apple. Man, for the longest time Apple was the hippest thing on the digital block. What happened??

Update: transfer of files (279 albums, in my case) appears successful, though it took me some time to figure out how to get them to show up on the interface (Click "Library" > "Albums" (or "Songs" etc.) > "Uploads" = et voila). The bad news: ain't no way you can download them back to your hard-drive, ever. To be fair, the option to download the files you uploaded to Google Play Music was QUITE restrictive -- you could do it twice, and that was it. Still, there's something a little chilling about seeing "your" stuff put behind bars like that.