I can’t recall when I read this book — probably about 10 years ago. And my recollection of its content is patchy — justifiably so, because the chatter is forgettable. I gave it away and moved on with life.

Still, there’s a moment midway through the book that does stand out. Frank Miller describes fellow industry provocateur Todd McFarlane as that kid in the classroom “who carves a swastika into the desk” just for the hell of it because he doesn’t care what anyone thinks. This summary gets a rise out of Eisner’s wife Ann, who blurts, “I can see that!”

I’ve gotten ahead of myself. Will Eisner was one of the greats in the American comic book industry. Everything he drew was in a league of its own. But more than that, he had an exceedingly keen business acumen — a rarity among the artists who bumped elbows with him. The Schusters and Kirbys and Kanes of his world lamented comic book work — they were slumming it, doing the only work that paid (and paid poorly) while in their heart of hearts they yearned to be artistes. Eisner saw no shame in the work, but kept his eye on the point of profit and never left it. Giving away all rights to a character you created? Unthinkable.

Eisner did alright — when his future father-in-law hired a detective to see if this man-about-town was keener on the family fortune than he was on the daughter he was courting, it came back a nothing sandwich.

The interview takes place over a weekend in 2002. Miller’s description of McFarlane is punky — Miller is notoriously thick in these matters, but who the hell says something like this in a Jewish household? That the Eisners respond with amusement speaks volumes to the relationship they have with Miller.

And Ann — how remarkable that she knows exactly what is being said here. At this point the Eisners have been married over 50 years. A spouse could be forgiven for losing interest in the family business after a few decades. But Ann is more than just in sync with what Will is doing — she not only knows about McFarlane, she seemingly KNOWS McFarlane. McFarlane is a relative upstart. Eisner likely has zero business relations with him, unless it’s discussion over a Spirit figurine. And yet Ann knows.

Further in the conversation Eisner and Miller discuss the dollars-and-cents business of comics. Eisner points out Miller’s unique benefit — You married your colorist; In your case your wife does the colors. Until reading this book I had no idea Miller tied the knot with 80s/90s colorist phenom Lynn Varley.

Lynn Varley — the prestige work speaks for itself. But what that woman could get a five color press to commit to pulp paper is just this side of miraculous. 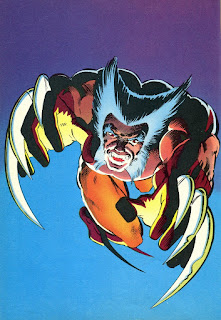 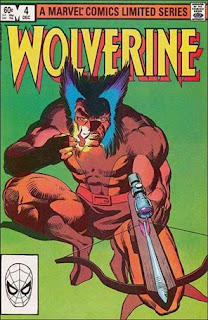 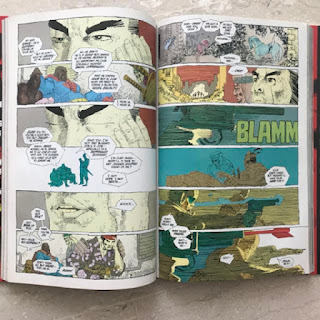 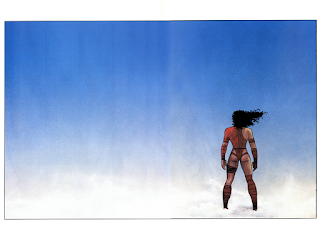 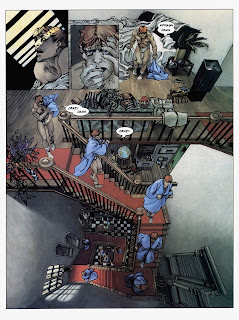 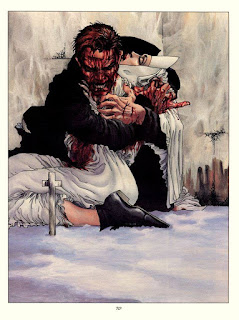 A quick Google search reveals the situation changed since the interview. Eisner died in '05, Miller and Varley separated later that year. The explosive success of the first Sin City movie, followed up with 300 seems to have set Miller off the chain.

In that light one almost wonders if Eisner wasn’t gently suggesting to the younger man Guard this bond — guard it with your life. Eisner was too soft-spoken to be so blunt. Neal Adams, arguably the greater mentor to Miller, is characteristically more to the point.

I keep thinking of Ann. “I can see that!” Yeah, I’ll just bet — that and a whole lot more. Where Miller and Eisner drift off in dozey reveries I daresay Ann Weingarten Eisner could have dished the real dirt and left this reader more to remember.

Ann Weingarten Eisner/Lynn Varley — I would pay real money for that.
Posted by Whisky Prajer at 9:37 am
Email ThisBlogThis!Share to TwitterShare to FacebookShare to Pinterest

Seriously, yes. I love this.

I only learned about Varley pretty recently, I’m afraid. (Last year?) I might have caught somewhere along the way that she and Miller were together for a while, but I guess it didn’t stick. (I’ve never been able to work up much interest in Miller, truthfully.)

Come to think of it, I might be the person you gave this Eisner/Miller title to some years back. Or maybe you just offered to? Life’s been kind of crazy for, oh, six or seven years. If I have it, it’s boxed with most of my books, residing with family several states away, pending improved circumstances (or their loss of all patience and sale of the lot to the nearest used dealer).

Haha! Yes, you were the one I sent it to. And I am grateful you do not have the means to check the accuracy of my memory here!