June 5, and I am still resorting to one of these in the evening. 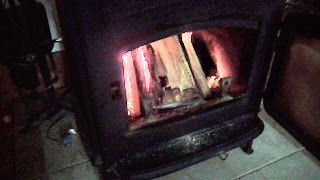 Yes, it has been just that rainy and cool up our way. And I’m not complaining — am grateful, rather, for this cast-iron buddy of ours. It saves us from the alternative — turning up the heat, firing up the boiler, and warming up the whole dang house when really just one room will do, thank you very much.

That said, if this summer ever turns warm, or even hot, I will be well and truly conditioned to not complain about that, either.

What would your teenage self think of you now? Over at Medium Tim Kreider asks the question.

I gather Mr. Kreider thinks more of his teenage self than I do mine.

I wonder how long I’d be able to hang out with the prat — my teenage self, that is (Mr. Kreider would be fun, I suspect — we have Tomi Ungerer in common, for starters). I live with my teenage memories, which is as much of my teenage self as I care to brook. I could have been so very much worse, I know that. I also suspect I could not have been much better — a thought that would throw me into a depression, were I to meditate on it.

Maude Newton has a new newsletter which I’m digging in a big way — Ancestor Hunger. Sez Ms. Newton: “You might want to subscribe to Ancestor Hunger if the name makes intuitive sense to you.” She lists other, cheekier reasons why her newsletter might be of interest, but she had me at intuitive sense. To my mind I have more than a few ancestors who died in a hungry state, and I am not altogether persuaded that condition has been sated.

Anyway, check it out for yourself. Ms. Newton’s dispatches roam in attitude and tone from charmingly woo-woo to earnestly scientific, sometimes within the same letter. Give it a look, and see if your dreams don’t get a bit messed up.

I used to dream about Everest, when I first read Krakauer’s blockbuster. He made the ascent seem so pedestrian and anticlimactic and Beckettian in its inscrutable proximity to the other side of this existence, my psyche was utterly seized by the thought of actually climbing the peak.

Rather than acting on the impulse (which I could in no way afford), I read more books. Joe Simpson’s Touching The Void, for starters. Dark Shadows Falling, his next book, illustrated just what an appalling gong show Everest had become. And now we have this headline: Traffic Jam on Everest.

The nearest mountain you’ll find me queueing up for is Wonder Mountain — IF I have a daughter keen to go.

I was tempted to type “Space Mountain” but right now Star Wars is the feature attraction to Disneyland. I’d be keen to check it out, but am afraid it might disappoint when contrasted with a truly immersive video game. But here are some tips, if you’re heading in that direction. Myself, I’ll stick with the advice I was given back in '77, and which erstwhile Everest ascenders would do well to heed — wait until the lineups have subsided.

It is the Age of the Fan — over 30,000 people sign petition to keep Game of Thrones showrunners away from Star Wars.

I haven’t watched a single episode, so I don’t have an opinion one way or the other. BUT. Disney and Marvel are (consensually) strapped into the same bed — Given how the comics are breathing new life into the most tired of SWU properties, why not send the GoT dudes home and give Marvel’s comics team the job(s)?

Oof. A lot of words, a lot of links. Hopefully they fuel a few thoughts of your own, and make up for last month’s Mulligan!
By Whisky Prajer - June 05, 2019
Email ThisBlogThis!Share to TwitterShare to FacebookShare to Pinterest