I played this old CD while transporting last weekend’s turkey remains to the township disposal site. In the car, with the volume at the optimal level, I marvelled anew at the capacity for some its passages to still send shivers down my spine, all these years later. 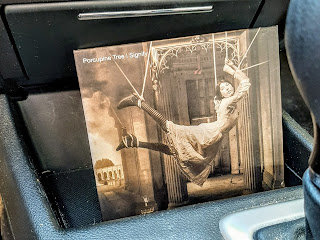 How many years later? I checked it out. It’s been 10, pretty much to the day, since I chanced across this marvelous album by this marvelous talent and his band.

Another reason for thanksgiving . . .

Elsewhere: Rushkoff pines for the days of yore, when WE did all the pranking. I’m reflexively wary of such nostalgia — of any nostalgia, for that matter (at least I hope I am). For my money Carlos Lozado does a better job of summing up the current scene: “The counterculture never died. It just switched sides. Transgression now lives on the right, dogmatism on the left.” (Emphasis mine.) It’s kinda what I was poking at with this KISS recollection, back when.

By Whisky Prajer - October 17, 2020
Email ThisBlogThis!Share to TwitterShare to FacebookShare to Pinterest

Ha, yes. Or rather (in more southerly idiom), Damn, son. When you’re right …. It is something to re-read that KISS post four years into Trump’s America. Going to suggest that it’s Lozada who ought to be a little jealous, maybe, if just of your capturing something in an image so tightly, so early. (Too early to capitalize in book sales, for sure, had you been inclined to try.) Kind of wish I’d had a better feeling then for what you were eyeing.

Whether Lozada & Rushkoff are right in boiling what we’re seeing down to this relatively tidy great-switcheroo narrative is another thing. Expect we’ll be discussing this for a while to come.

Looked and found that there are four copies of What Were We Thinking in the CPL system, by the way — and currently thirty patrons in the holds queue.

Man, that brings back memories of the bookstore. A rave from the NYTBR or The Gloat & Wail was always a love/hate affair for us, as we scrambled to lay claim to suddenly dwindling stocks from publishers and distributors. And of course the TPL wait-list was similarly affected. Reading the Globe's current books pages, I have my doubts there is much influence they are exercising on a troubled Can-Lit scene these days. I suspect CanLit has become an increasingly localized scene -- if you know the author, you buy the book and recommend to friends. I don't mind the shift, in some ways. But it's not making any of us rich beyond the dreams of avarice, to be sure.