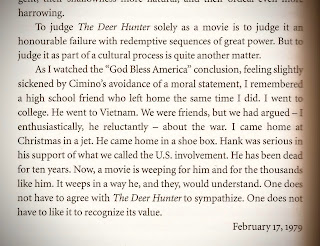 Re-reading Jay Scott nearly 30 years after his death in 1993, it is striking to see how forcefully he grappled with the Vietnam experience he saw depicted in the movies. It was, he acknowledged, invariably the American experience in Vietnam — and he sounded the alarm, again and again, on this reflexive solipsism, even as he recognized and applauded the necessity of its expression.

From my 2020 vantage point — as a man whose life now exceeds my role model’s by 11 years and counting — the intensity of Scott’s focus on these movies reads as the painstaking formation of a moral core, one which will not absolve Scott or his readers of guilt, but which nevertheless insists on an informed sense of mercy as well.

I currently do not see any of the remaining big critics writing at this level of ambition, with this degree of acknowledged shared humanity — though I am happy to be directed and corrected in this proclamation.

The text from the above photo:


To judge The Deer Hunter solely as a movie is to judge it an honourable failure with redemptive sequences of great power. But to judge it as part of a cultural process is quite another matter.

As I watched the “God Bless America” conclusion, feeling slightly sickened by Cimino’s avoidance of a moral statement, I remembered a high school friend who left home the same time I did. I went to college. He went to Vietnam. We were friends, but we had argued — I enthusiastically, he reluctantly — about the war. I came home at Christmas in a jet. He came home in a shoe box. Hank was serious in his support of what we called the U.S. involvement. He has been dead for ten years. Now, a movie is weeping for him and for the thousands like him. It weeps in a way he, and they, would understand. One does not have to agree with The Deer Hunter to sympathize. One does not have to like it to recognize its value.

February 17, 1979
By Whisky Prajer - June 27, 2020
Email ThisBlogThis!Share to TwitterShare to FacebookShare to Pinterest