What four films define you? (No, really)

It's been a while since a generated meme captured my attention, to say nothing of my imagination, but this one did.

My wife has known me for just over a quarter-century, so I asked her which four she thought defined me.

“Just one condition,” I said. “No Star Wars, 'cos it's too obvious.”
This got a rise from her. “You HAVE to say Star Wars, because there is no more obvious film than that!”

Sigh. Okay then, Star Wars it is — Film Number One (1)! And, in fact, with the latest (final?) installment of Mr. Skywalker's adventures the choice seems even more obvious. Like him, I increasingly find myself wanting nothing so much as to be left alone in a comfortable chair.

“Alright, is there a particular concert movie or band doc that defines you?”

Wow — so many greats to choose from. RUSH, Peter Gabriel, Talking Heads, and more recently Devin Townsend and Steven Wilson.

I squirmed uncomfortably, and said, “Actually, if there's a music doc that defines me best it is almost certainly . . .” 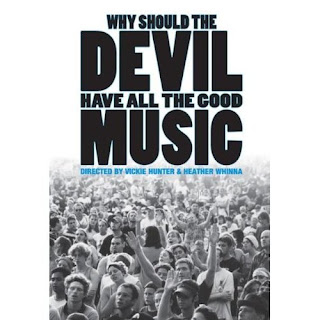 Film Number Two (2)!  — Why Should The Devil Have All The Good Music?

Here's the truth: the first rock music I listened to was Christian Rock. Here's another confession: even though I jettisoned 99% of my Christian Rock library in the early '90s, I remained game to attend Cornerstone Festival — the Lollapalooza of Christian Rock.

I never managed it — but Vickie Hunter and Heather Whinna did. I couldn't say which one of them is agnostic and who is the atheist, but they both have such an open spirit they get attendees and acts alike to speak freely about the aesthetic and moral tensions that hamstring their enjoyment of, and attempts at, artistic expression. Watching it 14 years later, this film doesn't just define where I come from — it does a disturbingly good job of defining the current cultural moment as well. It's on YouTube.

“What is your favourite love story?” 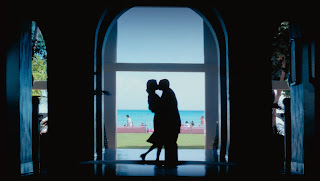 Film Number Three (3) — Punch Drunk Love. For a lot of us dudes, the trick to intimacy is acknowledging the rage generated by our sense of isolation, and letting 'em both go.

“Okay, we need a writer film. Barton Fink?”
I do love that film — a lot. But it doesn't “define me” (I hope!). Strangely, (and hopefully not too preciously) the writer film that just might is Stephen Soderbergh's second movie . . .
Film Number Four (4)! — Kafka. I think Soderbergh is, perhaps not my favourite filmmaker, but my most beloved one. He is a daring stunt man, and as with all daring jugglers, the moments I love him most are when he attempts something bold, and drops the ball. (Conversely, he tries my patience when he delivers the safe goods — Erin Brokovitch, Ocean's-By-The-Dozens, etc). In Kafka he drops the ball six ways to Sunday. It dares all, and I love it — I want to be that.

I do not tag people, but I would love to hear what four films define you (no, really). Comment or link below, svp.
Posted by Whisky Prajer at 11:18 am
Email ThisBlogThis!Share to TwitterShare to FacebookShare to Pinterest

Butch Cassidy and the Sundance Kid - I remember as a kid all the adults talking about this one. This was the first movie I got to see with adult concepts in it. It is still one of the better film narratives I've ever seen. George Roy Hill was a master at his craft. I think he used enough dynamite. "Raindrops Keep Falling on My Head" still plays on the mental jukebox regularly.

Silent Running - I first saw a documentary on how they made the robots using amputees walking on their hands, creating my first "must see" movie. (Robots have been an obsession of mine prior to my forming a memory of why, though perhaps "Lost in Space" was the culprit.) It was full of brand-new concepts like ecology, fighting for things you believe in, and the stunning evil of indifference displayed by the inhuman acts corporations can commit.

Andromeda Strain - Few movies get their geek on like this one. I watched this a couple times without seeing the beginning, because the lab scenes are so entrancing, every time I flipped past it on the dial, I'd go back and watch to the end. I'm a sucker for this format; you put a bunch of super smart scientists snarking at each other over a boggle, and I'm there. I found the concept that alien life might simply be toxic to us interesting and how much thought had been put into such an encounter by the (fictional) scientific community. The simulations of the a-strain killing things always gave me a nasty thrill, too. (First watch, turned to mom, "Did the monkey die?!?")

John Carpenter's The Thing - Dean Koontz has always maintained you should start a story as far into the action as you can. This movie is the poster child for this, as we open with someone in a helicopter shooting at a doggie. Oh noes. Then it wraps some gooey tentacles around you and leaves you shivering in the snow. What a ride. What a mind-f^ck. I am compelled to watch this every few months or so.

Here were the others in contention I listed in order to pick the final 4, in no order whatsoever:
Star Wars
Robocop
Blue Velvet
Westworld
Altered States
Wizards
One Flew Over the Cuckoo's Nest
Brazil
Eternal Sunshine Of The Spotless Mind
Harold and Maude
Gravity (I still find myself holding my breath at times during this)
The Elephant Man
The Right Stuff ("Gordo, I have to urinate.")
Galaxy Quest
All That Jazz
Demolition Man ("Mellow Greetings. What seems to be your boggle?")
Close Encounters of the Third Kind
Young Frankenstein
Planet of the Apes
The Goodbye Girl
Rear Window (the only one made before I was born)

While this list might come off as just a list of favorites, they were/are all films that infused themselves into my soul. Left a mark, say. Thereafter, I was different somehow.

Oh man, those are all great choices. And I hate to say it, but I have only seen the Big Four on small(ish) screen. Don't know why The Thing slipped under my radar -- I was (I thought) a big John Carpenter fan. Saw Halloween, Escape From New York, Big Trouble In Little China, They Live ... but never bought a ticket for The Thing.

I get a bit stuck on the "Define" element. Why Should The Devil is not a film I need to dust off once a year -- heck, I'd rather watch The Filth & The Fury or End Of The Century for the umpteenth time. But Why is where I come from, while Filth is where I'm happier residing, currently.

Hm. I'm recalling seeing To Live & Die In LA when it was in theatres, and having my cage completely rattled by the rape scene, the principal's death, and the conclusion: "You're working for me now." Kinda want to include it in this list now.

Not so much an answer as a nod. Apologies!

Cool. If that scene registered with you as a youth, you can be pretty sure it drew gasps back in the day. I have to wonder what it would take to be similarly surprised today.

Yeah, I expect that’s true — though I’d probably do better to comment after having seen it again. Today the surprise might well be that I was taken by surprise at all, then, 25 or 30 years ago. But it can be difficult to assess change in oneself as an audience separately from change undergone by ‘audience’ on a cultural-wide level, obviously.

Mm. Bit of a digression, so bear with me: audience/singular to audience/collective gets me reflecting again on Toby Tyler. It bothers me somewhat that in my case the audience/singular hasn't changed much over the years -- some part of me still wants to ride in to the town of my birth and impress with a few stunts on the horse. Now I'm wondering if/how the culture of the audience/collective has changed around me.