I’ve been listening to Roy Orbison’s Black & White Night (e) — the 1987 gala concert that T Bone Burnett orchestrated in homage to Orbison. I get a kick out of the audience response. A ditty like “Dream Baby (How Long Must I Dream?)” elicits cheers and squeals over its quirky pauses, even though the song is only a throw-away compared to “Move On Down The Line.” It's like one of those buildings that wears all its guts on the outside for passersby to marvel at. The title is pretty much the entirety of the song’s lyrical content; the rest of it is built up with the standard chord changes, a washtub bass line, snappy work on the snare, and a chorus of sha-la-la-las: elements that clearly inspired the architecture of some of Burnett’s own tuneful musings.

If Orbison is remembered 40 years from now it probably won’t be for bits like that, but for the songs referred to by other, later singers — specifically “Crying” and “Only The Lonely.” k.d. lang visited “Crying” in one of her many signature covers that didn’t just honor the original but vaulted lang into the firmament; “Only The Lonely,” of course, was thumbed-over by Bruce Springsteen during his high testosterone years. Listening to those songs now, I have to wonder if lang and Springsteen aren’t the final word on Orbison. There are worse fates for a singer and craftsman like Roy Orbison.

Life goes on and our yearnings change with the demands of age. To hear “outlaw” Willie Nelson teaming up with Asleep At The Wheel (e), or John Prine singing old timey favorites with his buddy Mac Wiseman (e), is to hear a couple of formerly young bucks belatedly acknowledge debts to the music of their fathers.

Funny how that is: Nelson and especially Prine were once infamous for pushing the envelope. Prine’s “Your Flag Decal Won’t Get You Into Heaven Anymore” (l) was the sneer of a young upstart, flinging contempt in the face of Beulah-land patriotism. Hearing him now breezily take pleasure in a hoary old song like “Old Dogs, Children & Watermelon Wine” is disconcerting. And hearing anyone sing “Old Rugged Cross” is disconcerting.

She’s got plenty of these and a whole lot of those
And oh my gosh those sweaty clothes!
Oh! You pretty woman!

Just how far back do those lines hail from? I’m guessing my grandparents might have kicked up their heels to “Oh! You Pretty Woman!” A lusty line like, “Oh my gosh, those sweaty clothes!” is disconcertingly prurient, but gives the old song a real bite.

Funny to think I’m tapping my toes to my grandfather’s “Whole Lotta Rosie” (am) but so it goes. Today’s noise is tomorrow’s hootenanny — provided today’s noisemakers have some facility with a good hook and a clever turn of phrase. 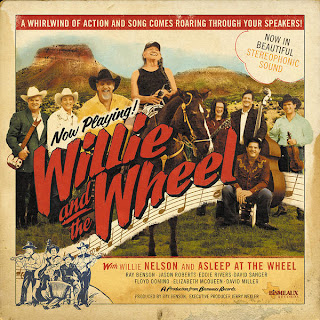 Posted by Whisky Prajer at 12:19 pm
Email ThisBlogThis!Share to TwitterShare to FacebookShare to Pinterest
Labels: Music

WP,
A throwaway gem of a post, sir. 'm in partial agreement with your note that, "Today’s noise is tomorrow’s hootenanny", for if Today's noise is Rap, a large dose of non-prescribed medication would be necessary for me to imagine it as tomorrow's toe-tapping hootenanny.

While Tupac Shakur does seem to come back from the grave on a predictable annual visit top-side to provide, as Chris Rock notes, clues to the police as to how he was killed, I can't imagine some 75+ old geezer cussin' 'n rappin' in an old folks home 50 years from now.

I can't imagine. Not long ago some radio guy was celebrating some anniversary of Run DMC, and played an old track for our edification. I didn't think it held up -- very slow, the rhymes were all obvious -- but then I'd be the wrong guy to ask.

The Black & White Night DVD is one of a number of music items I'd have a copy of if I'd ever felt justified spending the $ — and have satisfied for myself something of the urge toward, instead, by giving to someone else, for holiday, &c. (Another, — ah! — that Plant+Krauss album you liked so much.) Not the brightest way to 'gift,' maybe. But sincere, at least, as regard for the music & the good I suppose it's bound to do the giftee. — ha

So much of the delight of this concert, in my recall, is in the continual pleasure on Orbison's face at being fêted, and in the effect of all those younger stars thrown together as stage band, their individual high profiles subjected to the shared nostalgia kick, or to genuine appreciation for Orbison's music, or whatever it may be. Can't help thinking that to sit & watch, in this case, is much better than to listen only. Of course, it's partly because you're noticing less the songs themselves, this way, than the remarkable whole.

I've been wondering lately how well surroundsound might work in our abode. Someone with the proper "home entertainment centre" set-up would certainly benefit from a DVD like that. When I saw the televised event back in the day, I doubt it even qualified for stereo.

Lots of good Orbison fun to be had on Rock Band with January's Roy Orbison song pack. Ooby Dooby and all that. And Plant/Kraus; now that's good stuff.

I was sure you were putting me on, but no: there is indeed a Roy Orbison song pack for Rock Band. I'm guessing it's a good intro to the game, and almost certainly easier to master than the Mastodon song pack (okay, now I'm the one putting you on...)